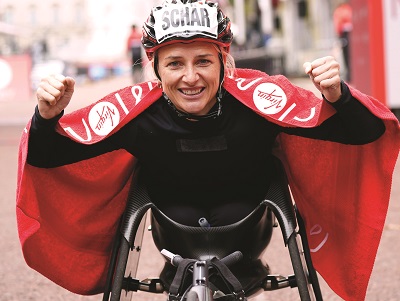 Sunday’s London Marathon welcomed just over 36,000 mass-event runners to the traditional street course – and another 40,000 runners took part remotely, logging their distance via a tracking app.It was 889 days since the colourful charity spectacular last followed the 26.2 mile route from Greenwich to The Mall, after  last  year’s  mass  event  was scrapped due to coronavirus pandemic restrictions.

There were no volunteers hanging medals around the necks of finishers, who instead found their medal in their bag.

Large groups did not wait at the start line together and instead participants set off in more than 40 waves across a 90-minute period.

Runners wore bottle belts to cut touchpoints on the day, and were asked to invite just one supporter to reduce crowds along the route.

More than £1billion has been raised for good causes during the past 40 years.

There were seven ever presents, one of whom took part remotely.

Fifty Tailwalkers had a DJ driving behind them after the third mile and a support squad followed to help anyone struggling.

Lucy Harvey, from Poole, Dorset, who turned 18 on Saturday, was the youngest runner, while Koichi Kitabatake, 87, from Japan, was the oldest.

There were about 1,500 runners raising money for Macmillan Cancer Support which is the marathon’s official charity this year.

The race included several measures to reduce its carbon impact, including electric lead vehicles and finish line goodie bags made out of sugar cane, rather than plastic.