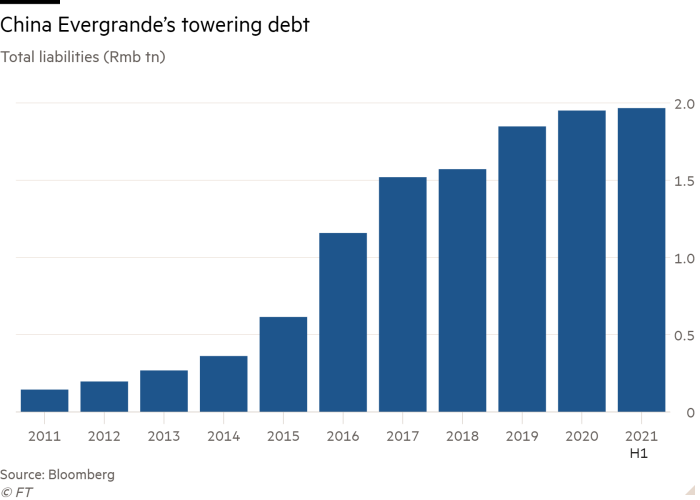 A video on the $9bn company’s website shows “Spire London” as it might look once complete: a curved-glass monolith soaring to 235 metres and vying with the pyramid-topped skyscraper that dominates the Canary Wharf skyline in east London.

But seven years later, there is still no tower.

“[Greenland] has put the ramps in for heavy machinery and laid the foundations. But there’s been no activity for as long as I can remember and no one can tell you what’s happening,” said David McCooke, head of residential development at estate agency Johns & Co, who is based opposite the site.

Greenland is among a clutch of Chinese property developers that rushed to London after the financial crisis, as the housing market boomed and relations between the UK and China warmed up.

But, like many London real estate projects, its plans have been hit by a slowdown in the sale of high-end residential flats and the Covid-19 pandemic. There are now concerns that a regulatory crackdown in China might end such developers’ interest in the UK capital.

Chinese developers have come under pressure from the so-called “three red lines” — new rules from Beijing that seek to curb excessive leverage across the property sector by limiting the amount companies can borrow.

Evergrande, the world’s most indebted developer and an emblem of the vast liabilities accrued through decades of transformative urbanisation in China, sparked fears across global markets as it missed a crucial interest deadline on its offshore debts. This week, another developer, Fantasia, defaulted on an offshore bond.

One property consultant close to London’s development market was contacted in the wake of the Evergrande crisis by a UK regulator with concerns about the risks of contagion in London. “The big question is whether the Chinese will restrict investment overseas,” he said. “That would be a pretty big crisis in the UK and elsewhere.”

Between 2013 and 2018, buyers from mainland China and Hong Kong poured close to £3.5bn into London, accounting for almost the entire flow of cross-border investment into the city’s land in 2017, according to Real Capital Analytics.

That has fallen sharply in the past three years, to about a tenth of that level, but thousands of homes in London are still being bankrolled from China. Many of these lie unfinished and unsold.

Country Garden, a Guangdong-based developer and the largest in China by sales, bought a site in Poplar, east London, for a reported £80m in 2018, with plans to create a £400m development of almost 800 homes. Hoardings have been erected promising an “exclusive collection of luxury homes” but no homes have yet appeared above them. 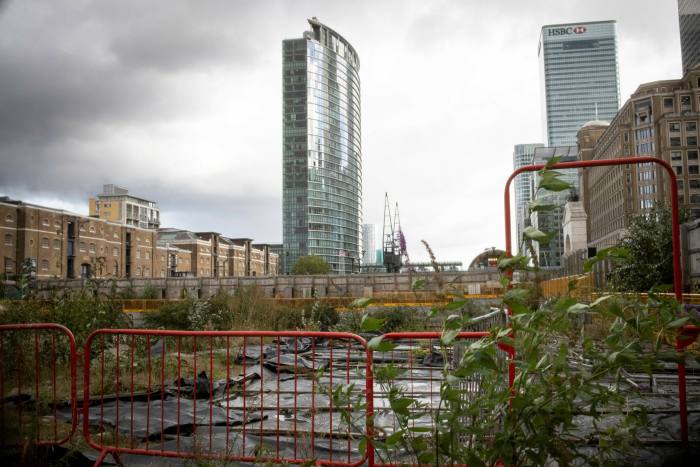 R&F Properties, a subsidiary of Guangzhou R&F, and Hong Kong-listed developer CC Land that also owns the “Cheesegrater” tower, paid close to £500m in 2017 for a site in Nine Elms, south-west London, which also remains unfinished.

Guangzhou R&F, which announced an injection of funding from shareholders last month, told the Financial Times it was “proud” of the construction and sales progress at Nine Elms but declined to break down how many flats it had sold in the scheme. As of June, the company was in breach of all three of China’s “red lines”, which cover metrics such as cash and equity as a proportion of debt.

CC Land said Beijing’s crackdown would have no effect on its developments. “We are not heavily indebted and our projects are fully financed,” it said. Even without Beijing’s intervention, many Chinese developers have faced tougher-than-expected challenges in London.

“Most mainland Chinese developers I’m aware of that have come to the UK have had pretty disastrous results,” said the boss of a big London homebuilder. “[They have] paid an awful lot for the land, struggled with construction costs and really struggled with sales.”

He is one of a number of UK developers that have described being comprehensively outbid by Chinese counterparts in land sales between 2013 and 2018.

“At that point in the market, if you were up against a Chinese developer, you almost knew it was inevitable you wouldn’t get the site,” said another.

But the market for London flats has sunk since 2014, driven down by new taxes on foreign buyers and the uncertainty sown by three general elections and the Brexit referendum. High-end apartments in the most central London boroughs are trading for 22 per cent less than they were in the summer of 2014, despite a modest uptick in the past year, according to estate agency Savills. That has skewered the upbeat projections on which developers based land investments. Shanghai-based Greenland paid £84m for its plot in Canary Wharf in 2014 and touted the value of a complete Spire at £800m. But the developer put the brakes on the project in 2018, noting that “the residential sector in London had changed significantly”. The scheme has also been delayed to address questions over fire safety, raised in the wake of the 2017 fire at Grenfell tower.

As the challenges have mounted, and flat prices have fallen, Chinese investment in London development sites and property has tailed off dramatically. The pressing question now is not whether the Chinese will continue to come, but if they will leave altogether.

Greenland insisted it had no plans to sell Spire London and intended “to take the development forward as a high-quality, landmark project — responding to the ongoing residential demand in London’s Docklands”. 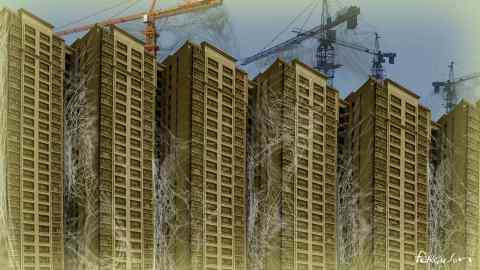 But the company is considering pulling away from its other London scheme, a residential development on the site of an old brewery in Wandsworth, south-west London. According to people briefed on the deal, Greenland is in conversation with “four or five potential bidders” and close to exchanging contracts with one.

The company said any sale would depend “on market conditions in London and the quality of offers received”.

It might also depend on conditions 5,000 miles away in Beijing. Greenland is in breach of two out of three of the lending “red lines”, according to data from Beike Research Institute. Its net debt-to-equity ratio exceeds a cap of 100 per cent, while its liability-to-asset ratio, excluding advance receipts, is also too high at 82 per cent. Developers that exceed the metrics are limited in their ability to take on new debt.

Earlier regulatory interventions by China humbled the international ambitions of companies such as HNA and Dalian Wanda.

R&F and CC Land were only able to buy the Nine Elms site in 2017 after Dalian Wanda pulled out. The next wave of investors are now facing their own challenges.

Some east London travel disruptions to beware of Oct 11-17

Insulate Britain’s actions justified by failure to act over crisis