A group of demonstrators sat down on the northbound A102 and glued themselves to the tunnel causing large queues to build up during rush hour. 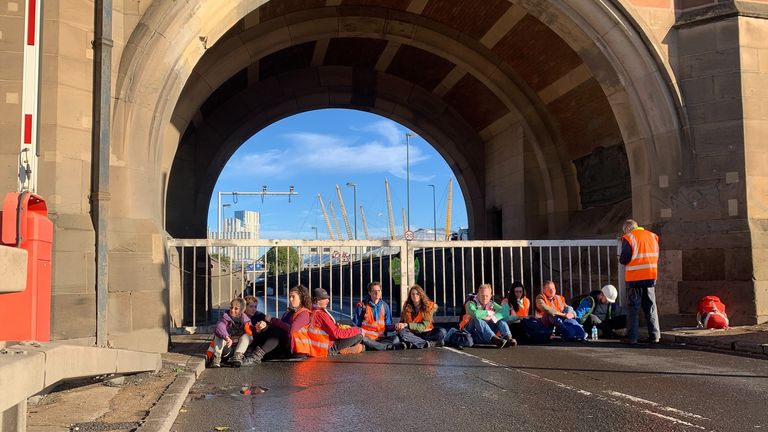 Insulate Britain said around 50 people were involved in the demonstrations, which have also targeted Hanger Lane, Wandsworth Bridge and Arnos Grove.

It is the 11th such action by the group, which is demanding the government insulate 29 million homes by 2030. It has previously targeted the M25, M4, M1 and Port of Dover.

This morning footage obtained by LBC showed a woman pleading with the group to move from the entrance of the Blackwall Tunnel, in east London, so she could get to her sick mother in hospital.

The distressed woman said her 81-year-old mother had been taken to a hospital in Canterbury in an ambulance.

She said: “She’s in the ambulance, she’s going to the hospital in Canterbury, do you think I’m stupid?

“I need to go to the hospital, please let me pass. This isn’t OK… How can you be so selfish?”

Sky News Correspondent Ali Fortescue spoke to some of the protesters at the tunnel.

Joshua Smith gave up his job as a bricklayer in Manchester to take part in the demonstrations.

He said: “I don’t want to be here, we’ve tried peaceful marches, demonstrations outside parliament, letters to MPs, petitions but everything is ignored, unfortunately when you sit in the road it’s the only time people pay attention”. Image:
Joshua Smith says he will keep protesting until the government acts

Mr Smith said he will continue protesting until he sees a change.

“The government desperately need to reduce emissions and insulating homes is the most cost effective way of doing that”, he added.

Furious motorists at Wandsworth Bridge have been dragging protesters out of the road where they appeared to be blocking an ambulance, in a video shared by TalkRadio.

One driver can be heard saying: “There’s an ambulance, you stupid p****, get out of the road”, as activists are picked off the ground and dragged away.

She is expected to warn protestors who block the motorway that they could face unlimited fines and up to six months in jail. 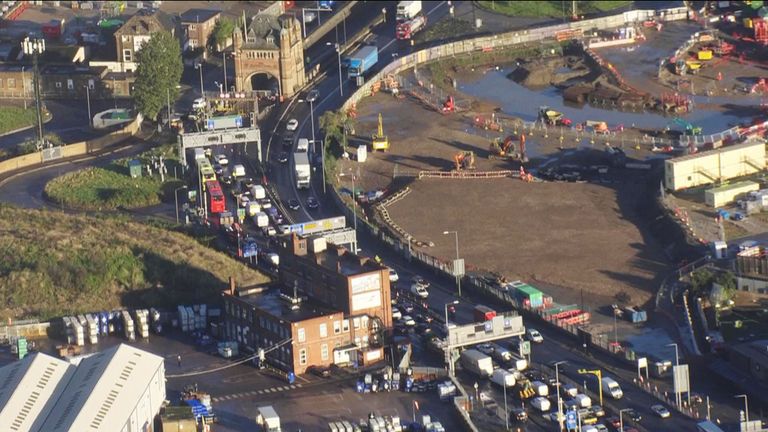 Image:
Traffic has built up by the Blackwall Tunnel

It is also expected that police will be given powers to stop and search activists for “lock-on” equipment used to prevent them from being moved.

The new powers will be added as an amendment in the Police, Crime, Courts and Sentencing Bill, currently going through parliament.

Ministers believe the current techniques used by Insulate Britain and its associated punishment – a maximum fine of £1,000 – does not reflect the seriousness of the disruption caused.

On 2 October, the government obtained a fresh injunction banning the group from obstructing traffic and access to motorways and major A roads around London.

Ahead of her upcoming conference speech, Ms Patel said: “The right to protest is a fundamental principle of our democracy but we will not tolerate guerrilla tactics that obstruct people going about their day-to-day business.

“Whilst the Labour Party stand on the side of these so-called ‘activists’, the Conservative party will always back the law-abiding, hard-working majority of people in this country.”

Prime Minister Boris Johnson added: “This government will always stand on the side of the law-abiding majority and ensure the toughest penalties possible for criminals who deliberately bring major roads to a standstill.

“We will give the police the powers they need to stop their reckless and selfish behaviour.”

Insulate Britain said its action would continue regardless.

“We’re more scared of what will happen when the climate crisis causes the breakdown of law and order, than we are of injunctions and prison,” an Insulate Britain spokesperson said.