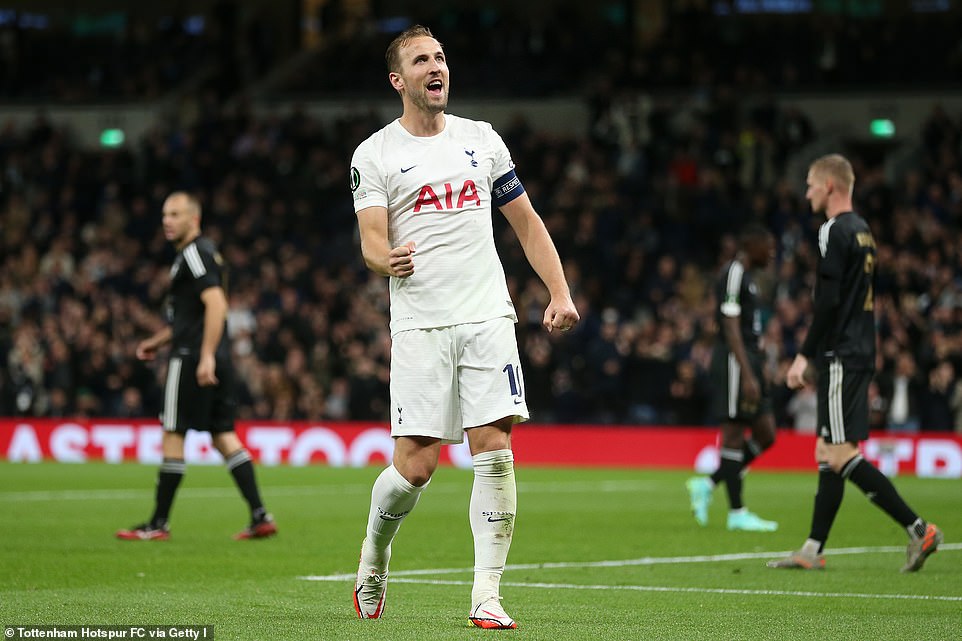 Just before the hour against NS Mura, Nuno was forced to make a triple change and bring on three players who for a long time looked like they would not be needed and able to put their feet up for the night.

With Spurs first toiling and then wobbling, Harry Kane, Heung-Min Son and Lucas Moura, Spurs’s most experienced attackers, were all summoned from the bench to help steady the ship. 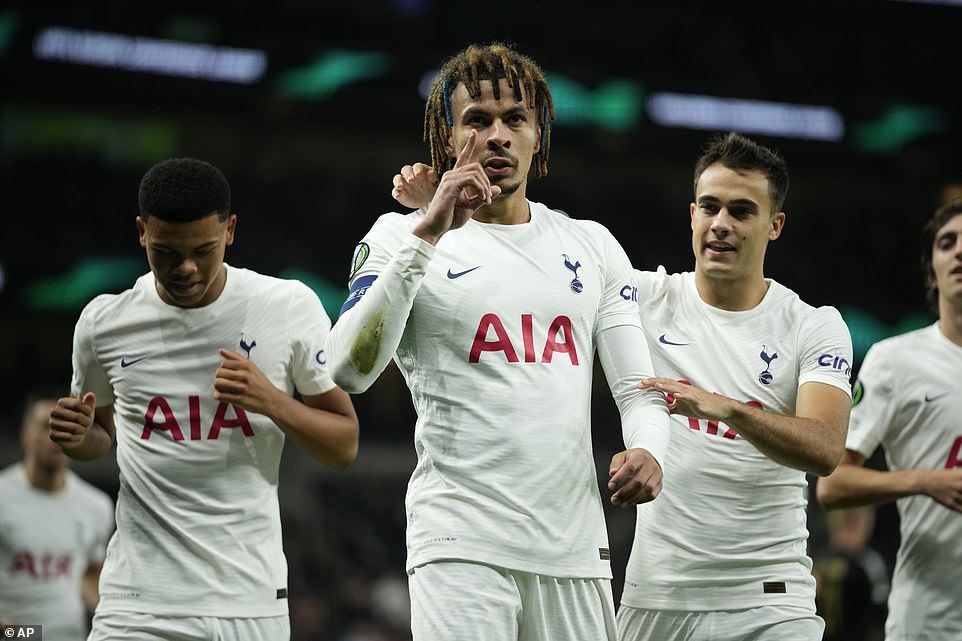 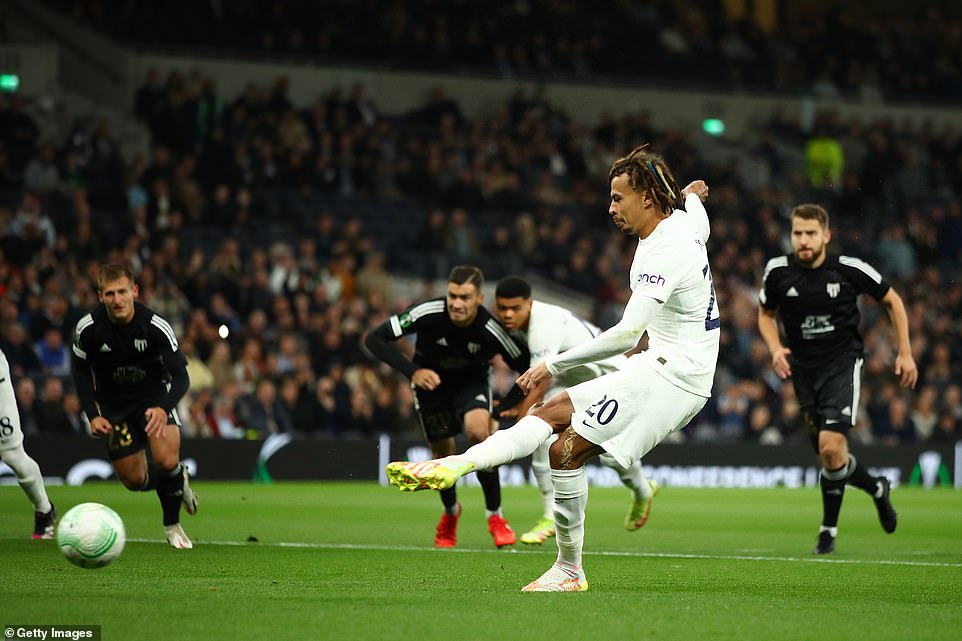 It was a moment which summed up how much of a meal Spurs were making of overcoming their limited visitors in their second Europa Conference League group game.

And how much Spurs and Nuno could not afford yet another morale-sapping and disappointing result following Sunday’s north London derby horror show and having not won in 90 minutes since the end of August.

The change paid off, spectacularly by full time.

Nine minutes after their introduction, Moura teed up Kane to settle Spurs’s nerves, Son then turned provider for the England captain before he converted Giovani Lo Celso’s pass to complete a clinical 20-minute hat-trick. 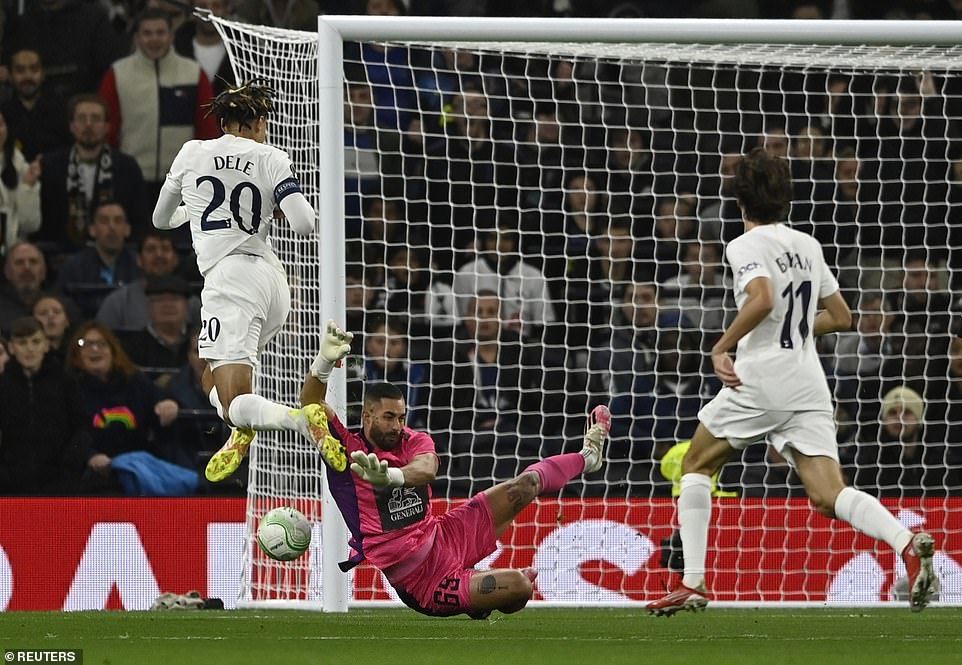 Goalkeeper Matko Obradovic raced off his line to smother the ball at Alli’s feet, but instead brought down the Tottenham man 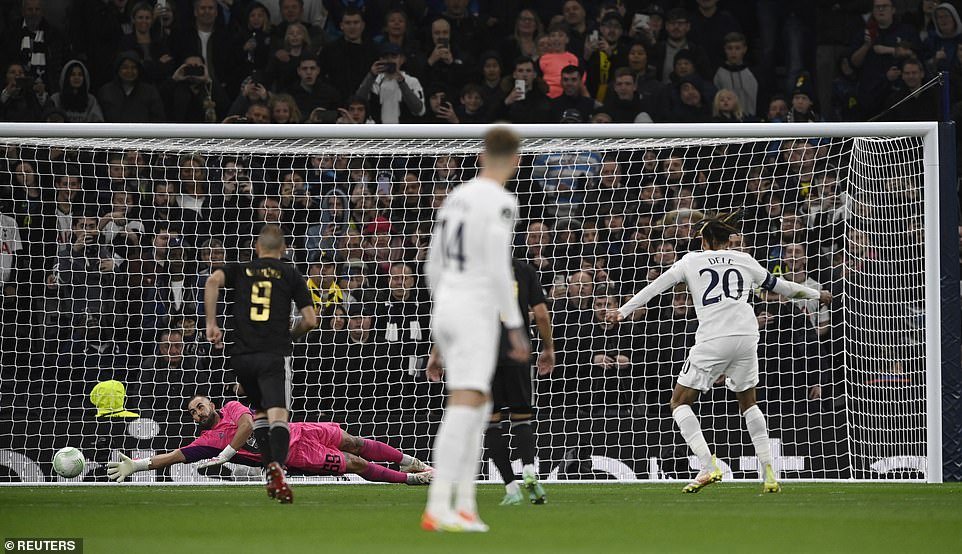 Alli’s resulting penalty was fired hard and low down to the stopper’s right, and nestled in the corner to open the floodgates

As Spurs as a whole should have been, Kane was simply too good for the reigning Slovenian champions.

It was his first treble for exactly a year and put him in illustrious company alongside Gerd Muller and Juup Heynckes as just the third player to score a hat-trick in three different UEFA competitions.

And while he has been out of sorts in the Premier League Kane has looked more like his usual self elsewhere.

All nine of his goals this season have come in the cup competitions for his club and World Cup qualifiers for England. 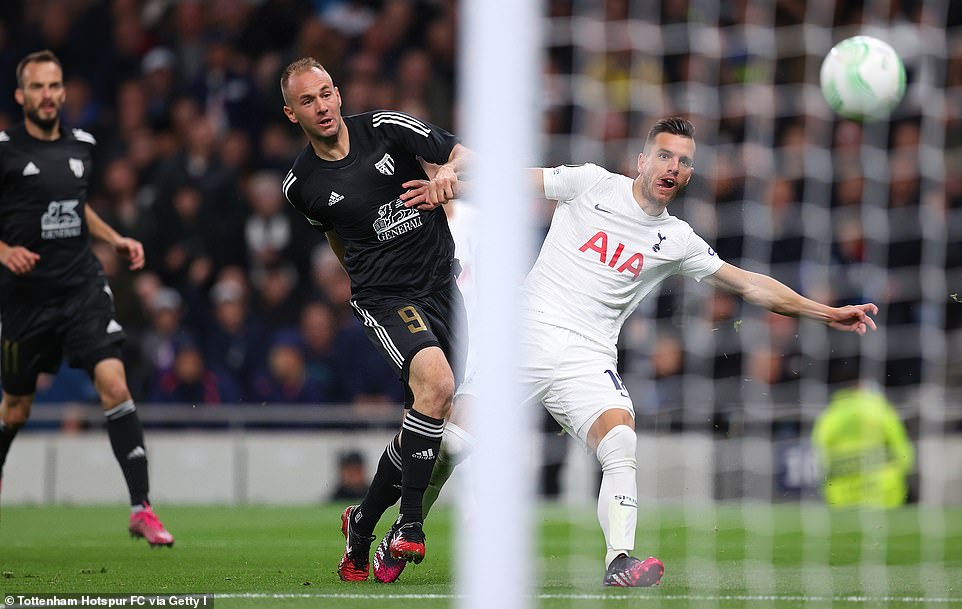 Giovani Lo Celso added Spurs’ second soon after Alli’s penalty, crashing an effort from an angle into the opposite top corner 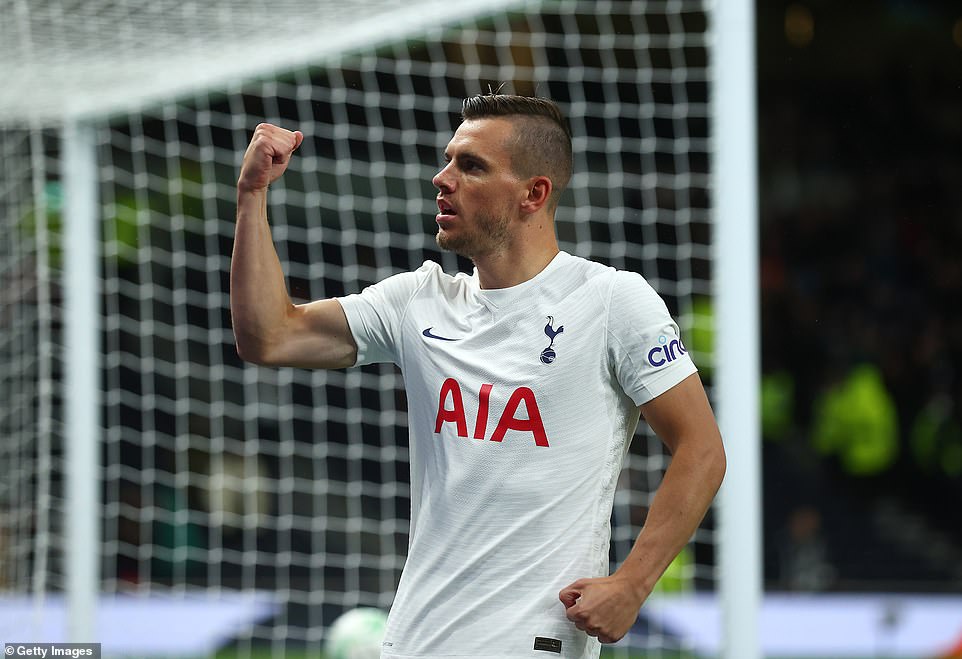 Lo Celso celebrated in front of the home crowd, and enjoyed a superb evening to increase his hopes of starting this weekend 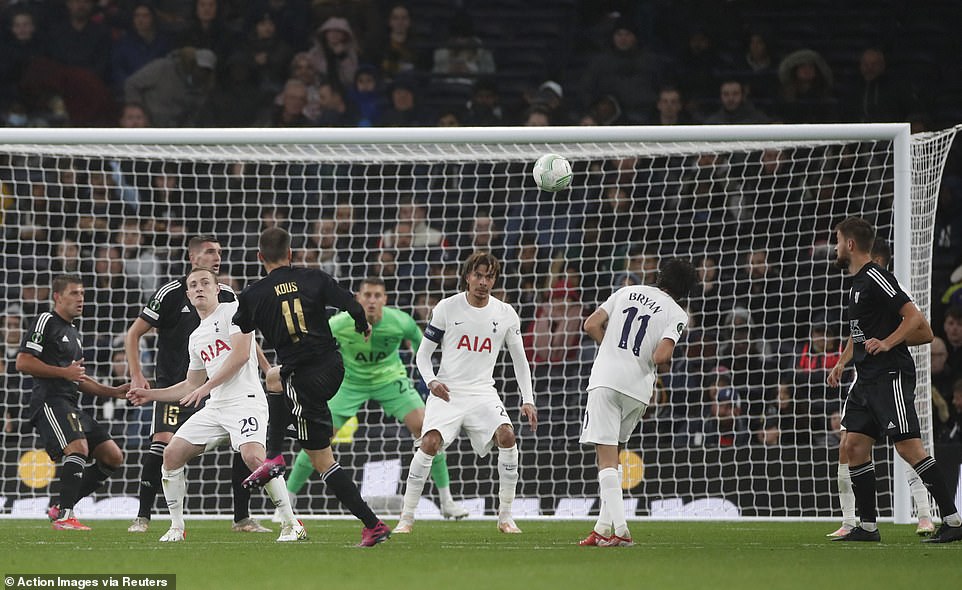 In the end the final scoreline was comfortable and a fairer reflection of the expected gap between the two sides.

But the fact the cavalry were needed to get to that point against, currently Slovenia’s fifth best side, was far from ideal.

Spurs seemed to be cruising after just eight minutes, 2-0 up thanks to a penalty from Dele Alli – starting skipper just a few days after being hooked at half-time at Arsenal – and Lo Celso.

But after Ziga Kous’s wonder strike for Mura it was not until Spurs’s big hitters arrived that victory was assured. 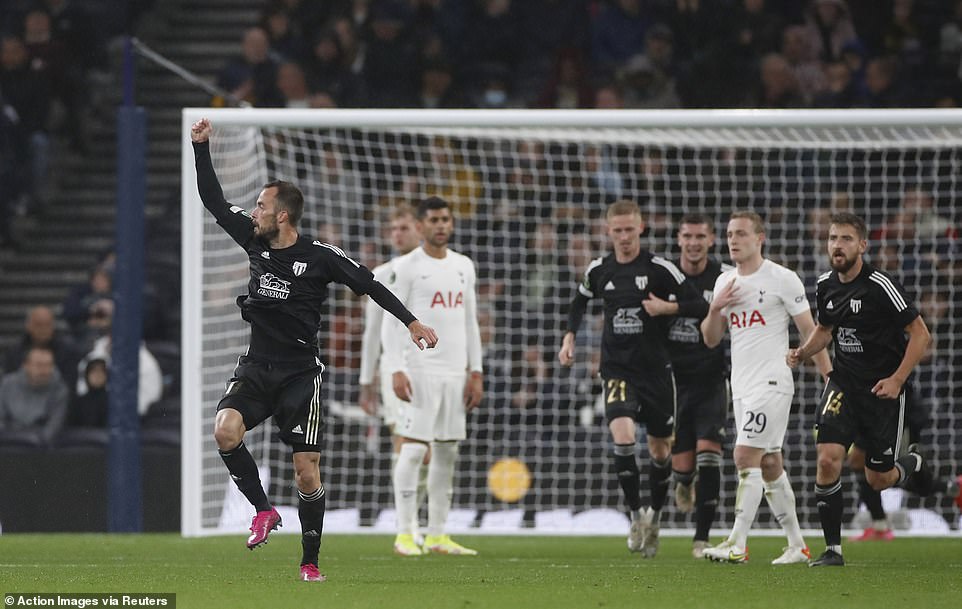 Kous barely celebrated his effort despite its superb power, which left Gollini rooted and watching on in the middle of his goal 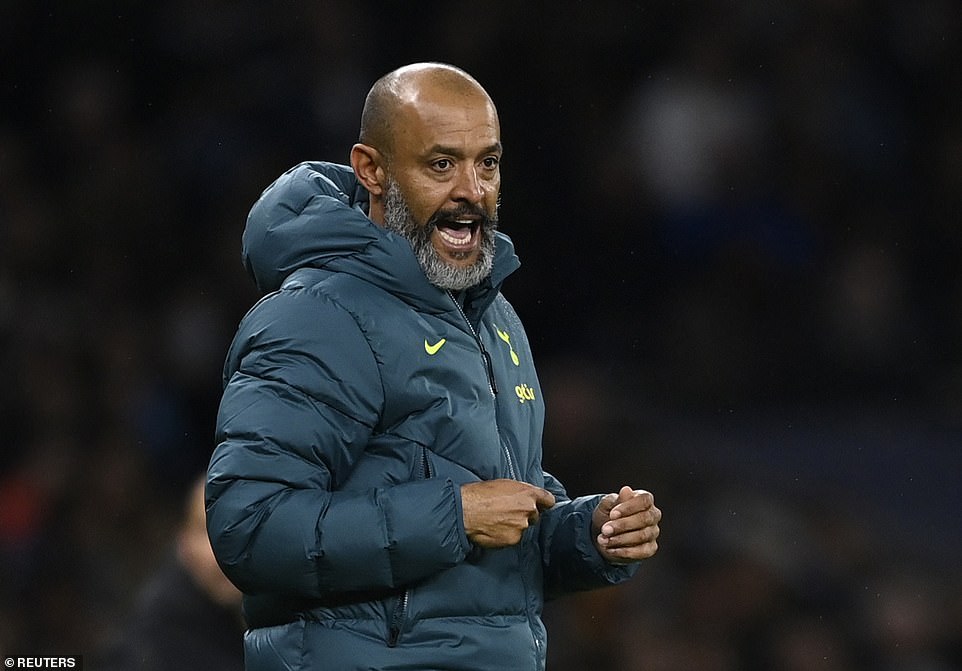 Nuno said: ‘The game needed them. The best way was to have the players on the pitch and they brought the energy the team needed.

‘It was good for the team, good for everybody. Today was important. We started well. The only period was the beginning of the second half. We lost a bit of control but the reaction to their goal was good.’

Kane said: ‘We hadn’t spoken about it [the substitutions]. It was all depending on how the game was going. The momentum shifted in their favour. It was about coming on and doing a job for the team.. ‘Our recent form has not been great but we need to try to turn it round next game. Every striker wants to score goals. I probably wasn’t expecting to come on but it’s nice to get the minutes. Whenever you see the ball hit the back of the net it’s a good feeling. Hopefully we can take it into the weekend.’

It seemed only a matter of how many Spurs would score after Alli, who was busy, involved and appeared keen to quickly put Sunday behind him in his 59 minutes on the pitch, converted a penalty he won and then Lo Celso blasted in number two. 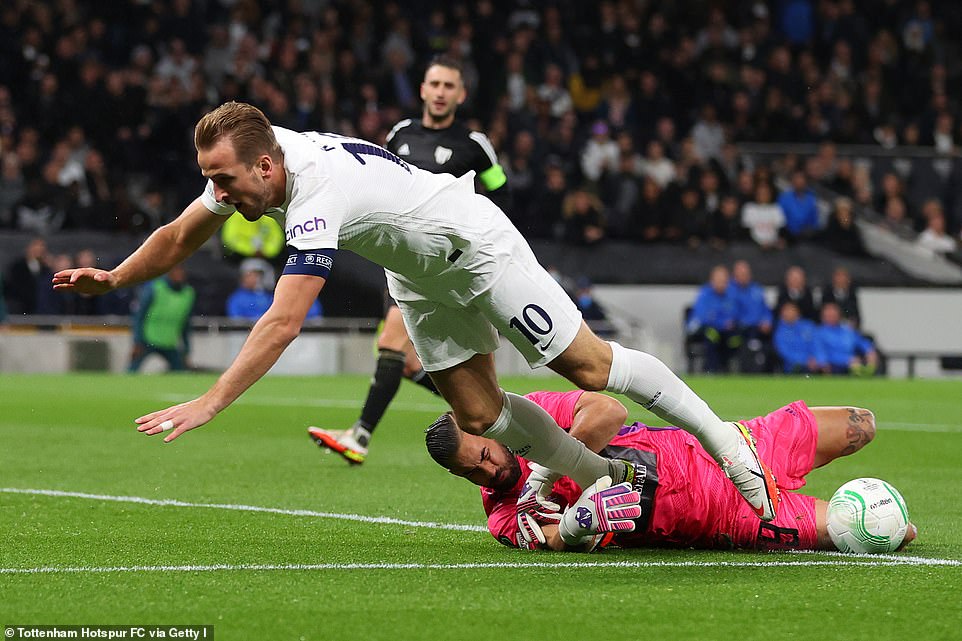 Kane was brought off the bench as a response to Mura’s goal and almost won a penalty, having then clattered into Obradovic 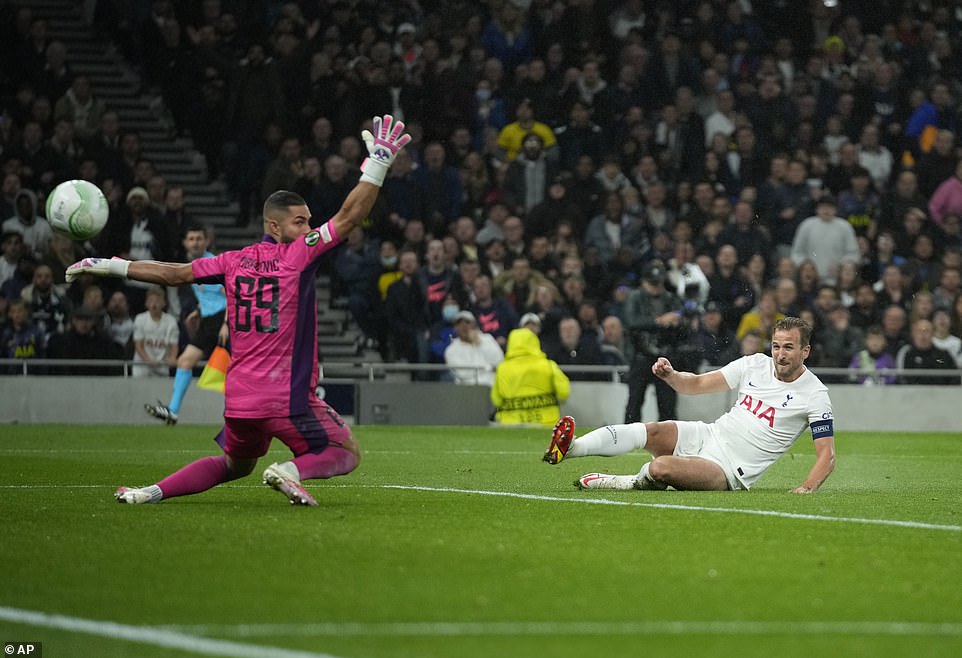 But Kane would eventually beat the stopper on a number of occasions, with the red-hot frontman bagging himself a hat-trick 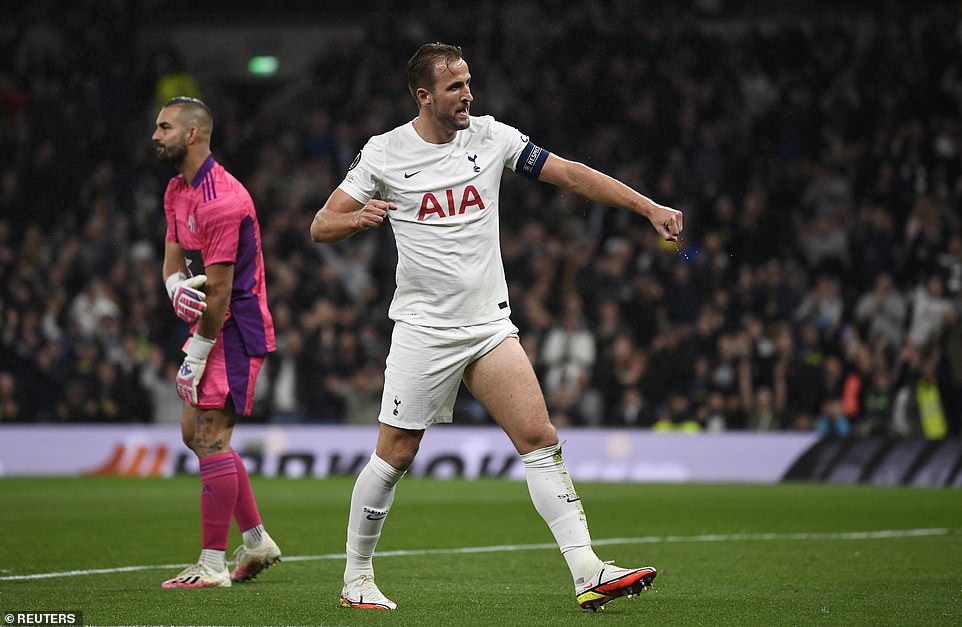 Kane slotted home Spurs’ third to settle any nerves, and the momentum in the tie then firmly swung in the favour of the hosts

Mura were looking every inch the weakest side in the group and in real danger of being overrun.

But, having seemingly wrapped up the game, Spurs, until the final half hour, rarely got out of second gear after establishing their two-goal lead.

Then Mura scored with a bolt from the blue to wake up Spurs and the crowd, Kous thumping in a first-time volley which flew past Pierluigi Gollini before he even had a chance to dive.

As the Mura bench and officials rose to their feet to celebrate the spectacular striker, Nuno patrolled the edge of his technical area, fiercely chewing gum with a concerned look on his face. 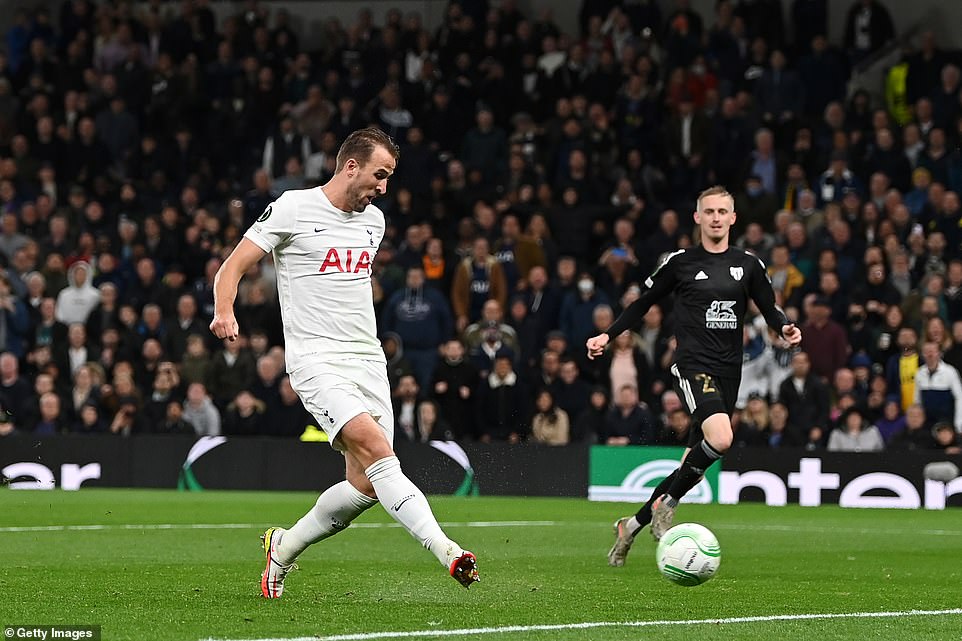 For Spurs’ fourth, Kane was played in again, and he kept his composure to poke beyond Obradovic with the side of his boot 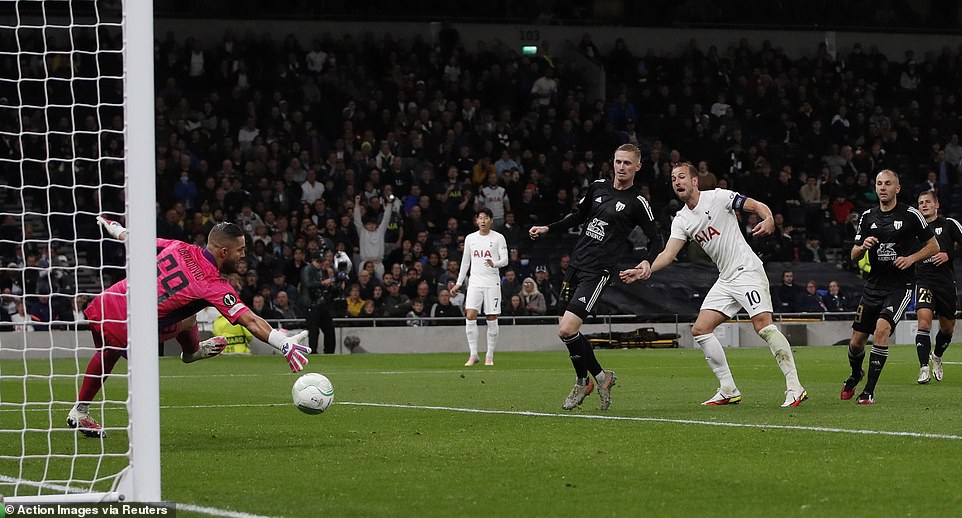 Kane’s third goal was taken in cool fashion, too, after the striker took one touch to control before planting across Obradovic

His response was to bring on the big guns. They were needed and fired Spurs to three points.

Just before the hour against NS Mura, Nuno was forced to make a triple change and bring on three players who for a long time looked like they would not be needed and able to put their feet up for the night.

With Spurs first toiling and then wobbling, Harry Kane, Heung-Min Son and Lucas Moura, Spurs’s most senior attackers, were all summoned from the bench to help steady the ship.