A group of defiant eco protesters caused traffic to grind to a halt as they blocked the M4 and the M1 in the group’s latest disruptive motorway protests, with one furious driver violently ripping posters out of their hands.

The protesters from Insulate Britain arrived at junction 3 of the M4, known as Cranford Parkway Interchange, shortly after 8am on Friday morning.

A separate group – also from Insulate Britain – blocked junction 1 of the M1, at Staples Corner.

Around 13 members of the group stepped onto the M4 and blocked traffic, demanding urgent action from the government on climate change.

One person was seen gluing themselves to the road, with four police officers on the scene within 15 minutes. At the peak there were almost 30 officers on scene.

Specialist officers were brought in to unglue protesters from the road.

Some demonstrators had chained themselves together and refused to move, leading to frustration from gridlocked motorists.

One driver, who was held up in the queues heading towards London, was seen ripping the group’s blue, red and white posters out of their hands and chucking them in the bushes.

Another angry driver said: “I don’t understand what they are f***ing doing. Look at them…staring, like goldfish.

“I understand what they are doing but this isn’t the way to do it, absolutely not. Sit outside parliament.”

Police arrested all 13 activists who were blocking the road – with all people removed by 10am.

This was the group’s tenth protest over the last two weeks, where activists have caused huge delays to motorists at both the M25 and the ferry port at Dover. 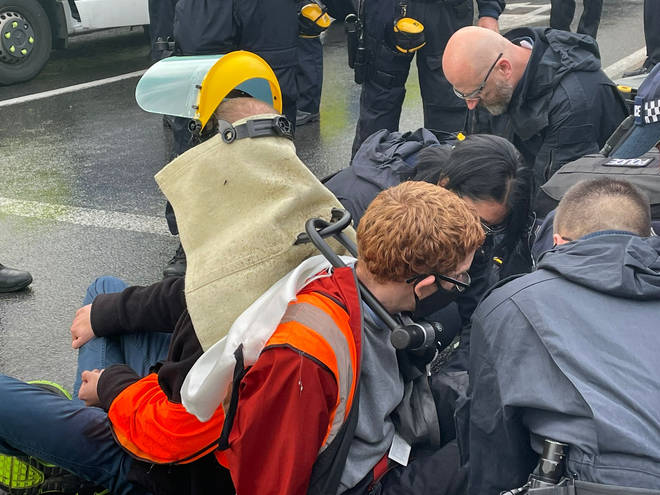 Protesters have chained themselves together during demonstrations on the M4.

In the morning the group blocked a key roundabout where the M25, A20 and M20 all meet, breaking last week’s High Court injunction for the second time, despite the threat of unlimited fines and lengthy prison sentences.

Then in the afternoon they returned and blocked junction 3 at Swanley.

The group admitted it was defying the High Court order, put in place earlier in September, which bans them from blocking or slowing down traffic on or to the M25 as part of a protest.

Breaching the court injunction can carry prison sentences and the threat of limited fines.

A spokesperson for Insulate Britain said: “It’s incomprehensible that the government is continuing to delay action on home insulation when we urgently need to cut our carbon emissions, eliminate fuel poverty and help hard working families with their rising energy bills. Added to which industry is crying out for the government to show some leadership and get behind a national retrofitting strategy. Come on Boris: get on with the job!”

Insulate Britain are a climate change campaign group who have been holding campaign meetings since at least June 2021, and were officially formed in August.

Some call them an offshoot of environmental activist group Extinction Rebellion (XR) because they used similar road-blocking tactics and many of their members have been previously involved with XR. However, the two groups are not officially linked.