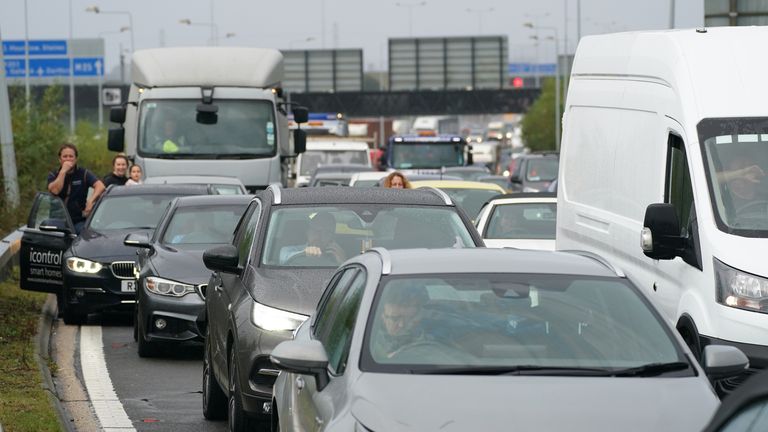 Police have arrested 53 people after climate protesters blocked a section of the M25 sparking chaos for motorists on Monday morning.

Officers say the “road has been cleared and traffic is flowing again” after activists descended on the major motorway near a roundabout leading to Heathrow Airport in London.

A police spokesperson said: “We made 53 arrests as we worked to minimise disruption motorists.

Image:
Drivers stand watching from their cars as traffic is halted

“Where possible, we opened up lanes to ensure traffic could continue to move. Those arrested are being taken to custody.”

Insulate Britain said in a statement: “This morning 52 people that have been involved in Insulate Britain’s two weeks of motorway protests blocked the M25 in breach of the injunction granted by the High Court last Tuesday.”

According to the injunction granted to National Highways Ltd, those involved “may be held to be in contempt of court and may be imprisoned, fined or have their assets seized”.

Campaigners said last week that they were “more scared of climate change than we are of breaking an injunction”, adding “there are times when we have to step up and do what is right”.

Liam Norton, a spokesperson for the group, said this morning: “You can throw as many injunctions at us as you like, but we are going nowhere. You can raid our savings and confiscate our property. You can deny us our liberty and put us behind bars. 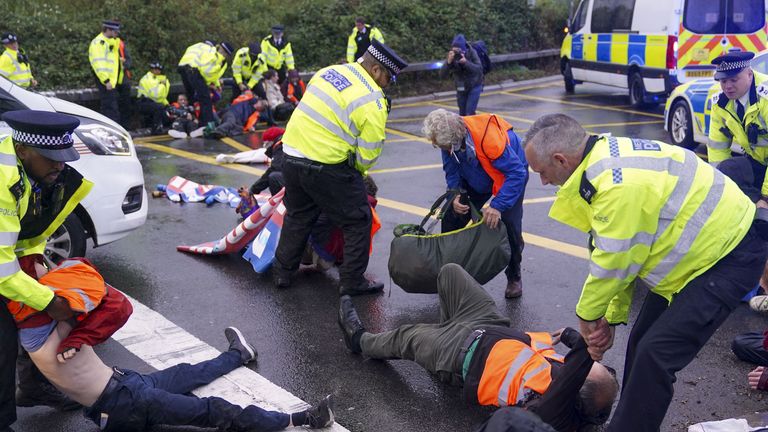 Image:
Police officers on the scene near Heathrow Airport this morning

“But that is only shooting the messenger. The truth is that this country is going to hell unless you take emergency action to stop putting carbon into the air.”

It’s the sixth time the group has targeted the motorway.

The Metropolitan Police earlier confirmed it was “attending a protest” at junction 14 of the M25 and said “arrests are being made”.

Insulate Britain members have already brought chaos to the M25 five times in the past fortnight – and had been threatened with imprisonment if they returned to the motorway.

What are the protesters calling for?

Activists from Insulate Britain, an offshoot of Extinction Rebellion, want the government to retrofit homes across the UK to cut climate emissions.

They are urging ministers to “fully fund and take responsibility for the insulation of all social housing in Britain by 2025”.

They say it is the prime minister’s “legal duty to act in the best interest of the British public”.

National Highways had been granted an injunction against the M25 protesters to prevent further sections of London’s orbital motorway from being blocked.

Following the announcement, Insulate Britain activists blocked a road outside the Home Office in central London.

The injunction came into force last week and means anyone breaching the order could face a prison sentence.

We’re attending a protest at Junction 14 of the #M25 near Heathrow Airport where activists are blocking traffic on a slip road.

We are on scene and have opened one lane of the carriageway. Arrests are being made – we will share updates shortly.

Protests were also carried out surrounding the Port of Dover, which led to the government being granted an extra injunction to try to prevent further disruption.

The High Court ruling in favour of National Highways means protesters will be prevented from occupying the A20 and strategic roads linked to the Port of Dover.

Police have made dozens of arrests since the beginning of the campaign.

Lumo train launch live: Is it faster than a plane between between London and Edinburgh?