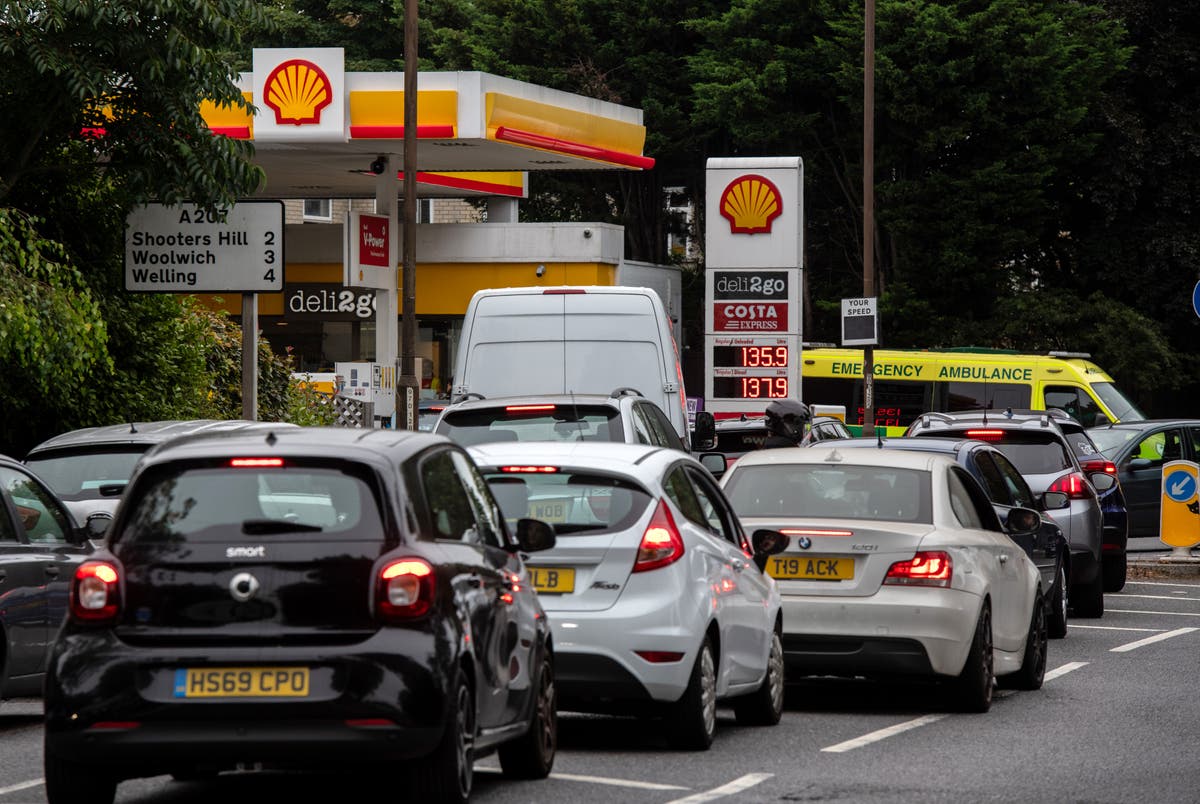 Shadow health secretary Jonathan Ashworth has said health and care workers should be given priority at petrol pumps, warning that otherwise patients could die.

If fuel is not reserved for “doctors and nurses, midwives [and] care assistants”, the Labour MP said people would be left “stranded” and in the most “desperate of circumstances”. Explaining how Britain faced a further crisis, Mr Ashworth added: “Some people could end up losing their lives, that’s how serious this is.”

It comes after the British Medical Association warned “there is a real risk that NHS staff won’t be able to do their jobs” if preferential treatment is not shown to those at filling stations who really need it.

The transport secretary said on Tuesday that the primary cause of the petrol shortages had been the cancellation of HGV driver testing last year due to the pandemic. However, Mr Shapps admitted: “Brexit I hear mentioned a lot, and it no doubt will have been a factor.”

It comes just one week after he insisted that critics were “wrong” to blame the divorce deal for the drastic shortage of heavy goods vehicle (HGV) drivers and resultant empty supermarket shelves.

Angry garage customers accuse ministers of having ‘no clue’

Some people queueing at petrol stations on Tuesday spoke to reporters about the issue.

Germit Mudhar, a 61-year-old builder who needs a van for work, said the government had been “running around like headless chickens” in response to public anxiety over fuel shortages.

“It’s ridiculous. The government has messed it up, they never think about things seriously,” he told the PA news agency, adding: “Nobody seems to have a clue.”

Asked about public over-reaction to alleged fuel shortages, he added: “It’s not so much the panic buying, it’s not just that, the government has known about the driver shortage for months and months and months.”

‘People will die’ unless medical staff prioritised for petrol – Labour

Shadow health secretary Jonathan Ashworth has said health and care workers should be given priority at petrol pumps to prevent “people losing their lives”.

The Labour MP was asked by BBC Radio 4’s World at One if fuel should be reserved for doctors, nurses and carers.

He said: “Yes, and we are facing a crisis, because if doctors and nurses, midwives, if care assistants cannot get to the bedsides of their patients, then people will be left stranded, people will be left in the most desperate of circumstances. Some people could end up losing their lives, that’s how serious this is.”

Brexit: Sign up to The Independent’s virtual event exploring the hidden costs of leaving the EU

The Independent is hosting a virtual event on 6 October, hosted by our chief political commentator John Rentoul, during which an expert panel will explore the pros and cons that the reality of Brexit presents and what the future holds for a UK divorced from the EU.

Teachers should have priority access to fuel amid supply issues or risk further disruption to children’s education, a teaching union has warned.

Dr Patrick Roach, general secretary of the NASUWT teachers’ union, called on ministers to take action to ensure teachers and support staff can get into work and schools and colleges can remain open.

He warned fuel shortages are expected to cause “serious difficulties” for education provision.

Dr Roach said: “For many teachers, the use of public transport is simply not an option, with many schools in areas that are not easily accessible other than by using private vehicles.

“The Government must urgently consider making teachers a priority group for access to locally available petrol and diesel fuel supplies.

“Without such intervention, many teachers will struggle to get to their places of work on time, adding to the daily uncertainty and disruption faced by children and young people.”

The Government has continued to face calls to give priority access to fuel supplies to healthcare staff and other essential workers.

Labour is braced for Boris Johnson to suspend the Northern Ireland Protocol at next week’s Tory conference, to milk the “drama” and distract attention from the fuel crisis.

Jenny Chapman, the party’s Brexit spokeswoman, revealed she anticipates Article 16 of the treaty to be invoked within days – triggering a fresh upheaval in EU-UK relations, writes The Independent’s deputy political editor Rob Merrick.

The government has continued to threaten the move – despite experts warning it offers no escape from the post-Brexit trade barriers – after Brussels rejected rewriting the Protocol.

Labour MP Neil Coyle is unimpressed with Grant Shapps admission today that Brexit could have played a part in Britain’s ongoing fuel crisis.

In his tweet Mr Coyle references a comment made by Mr Shapps last week that Britain being out of the EU had helped the country resolve the driver shortage.

He said on Twitter: “So Shapps says Brexit contributed to a problem but being out of the EU meant GB could fix a situation that wouldn’t have occurred if we’d stayed in the single market… Dimmer than a 1 watt lightbulb.”

Frustrated drivers waiting for fuel in south-west London have today blamed the Government, the media and each other for the ongoing chaos on forecourts.

John Lunn, 46, a carpenter from Wrotham in Kent, said the public had not “learned our lessons” from the Covid-19 panic-buying crisis.

“I was expecting the worst, we drove past at least 10 garages on the way here,” he told the PA news agency, speaking in a queue at a petrol station in Wandsworth.

“It’s utter madness really, I’m not being funny, but we didn’t learn our lessons from toilet rolls and pasta.

“After everything that’s gone on with buying food and not necessarily needing it, we’re now doing it with fuel.

“They mention there could be a shortage on the news and people have gone mad. If they hadn’t mentioned it, people would have gone about their day filling up as normal, it wouldn’t have happened.”

Brexit has been a ‘factor’ in fuel crisis, Shapps admits

Transport secretary Grant Shapps has admitted that Brexit has been a “factor” behind the fuel crisis – despite his previous claims the UK’s exit from the EU had helped the country adjust to supply chain problems.

Mr Shapps insisted only last week that cynics were “wrong” to blame Brexit for the drastic shortage of heavy goods vehicle (HGV) drivers causing empty supermarket shelves and the closure of petrol stations.

Drivers queue for petrol in Birmingham amid continuing disruption