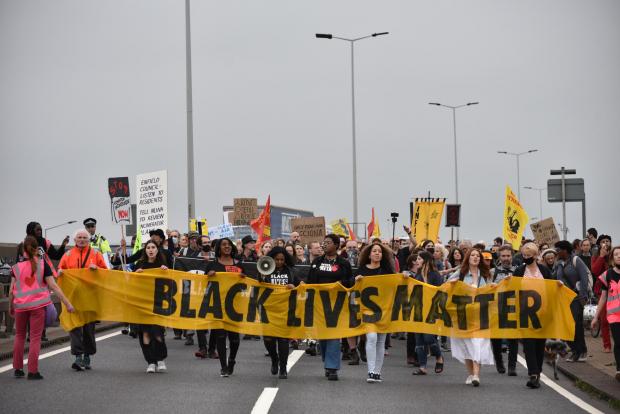 Traffic came to a standstill on the North Circular as campaigners took to the streets to protest against a new incinerator they say will worsen pollution.

Climate activists and residents marched from Edmonton Green to the planned site of the new Edmonton incinerator in Advent Way, holding up traffic in Fore Street and part of the busy North Circular Road.

The event on Saturday September 25 was part of a national day of action against waste incineration that saw protests in several cities across the UK.

Opponents of the incinerator – part of the £1.2billion North London Heat and Power Project (NLHPP) being led by North London Waste Authority (NLWA) – warn it will release carbon dioxide and other pollutants that can cause health problems. Extinction Rebellion, Black Lives Matter Enfield, Greenpeace and Stop the Edmonton Incinerator Now were among the groups that took part in the protest.

Delia Mattis, from Black Lives Matter Enfield, described the protest as “hugely successful” and said the number of people taking part was “in the hundreds”.

She said: “It was kind of historic, because it was clear that the people of Edmonton had never seen anything like that before, and it will encourage them to know there are people prepared to march on their behalf in solidarity.

“My concern is around disproportionality. These [incinerators] are three times more likely to be built in areas of great deprivation. This area will have a population of black and brown people and other racial and ethnic groups.

“Attached to that, we have got health inequality and Covid. Black people, we know, are 50% more likely to die from Covid than white people. It is a respiratory disease, [so] it is obvious that air pollution will be a problem.”

Delia added campaigners were tired of lobbying and being ignored, and warned they were prepared to continue taking disruptive action.

Andy Thomson, from Extinction Rebellion Waltham Forest, said the march had disrupted traffic on the North Circular for up to an hour.

He said: “We are angry. We feel the community has not been consulted properly – especially since the declaration of a climate emergency by six out of seven of the councils [that form NLWA].

“On the one hand, councils are declaring climate emergencies. On the other hand, they are investing in operations to burn waste, pollute the atmosphere and emit carbon dioxide for what would be five decades.

“The [current] incinerator is at the end of its life. We are in a climate crisis. We should not be investing in the same polluting policies.” 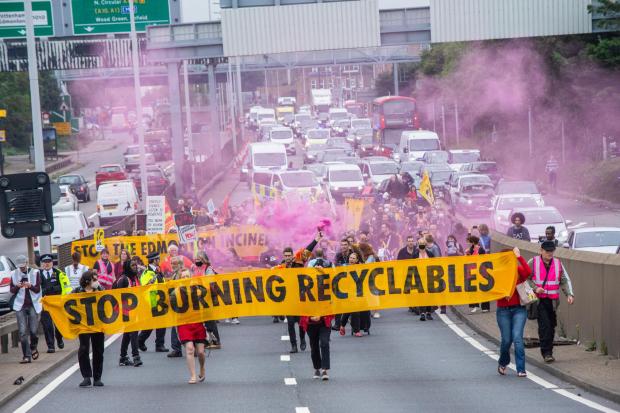 Demonstrators protest against the incinerator plans at the march on Saturday (credit: Extinction Rebellion

The new Edmonton incinerator, which was given planning permission in 2017, is designed to take waste from the seven London boroughs that together form NLWA; Enfield, Barnet, Haringey, Camden, Waltham Forest, Hackney and Islington.

NLWA claims the NLHPP scheme, which also includes construction of new recycling facilities, will reduce landfill and boost recycling, slashing carbon emissions by 215,000 tonnes per year compared to the output of the current incinerator.

But campaigners behind the march claimed the new plant will emit 700,000 tonnes of carbon dioxide a year – equivalent to an additional 250,000 diesel cars on the roads. They also claim it will release pollutants that can cause breathing and heart problems.

A recent photo of the construction site to deliver the new waste site in Edmonton. Credit: North London Waste Authority

Saturday’s protest was the latest event in a growing wave of local opposition to the scheme. Earlier this month, campaigners staged a “die in” demonstration outside Enfield Civic Centre to protest against the council’s involvement in the scheme. Scores of residents and campaigners have also written a joint letter to the council’s chief executive calling for a review of the incinerator. 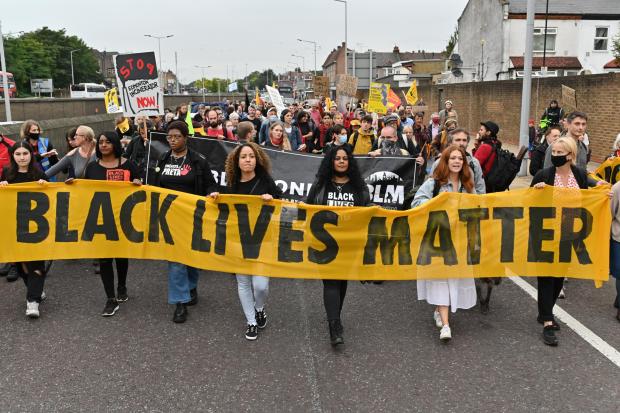 A North London Waste Authority spokesperson said NLHPP would help tackle the climate emergency by diverting household waste from landfill, adding: “Public Health England is completely clear that modern facilities like ours do not have a significant impact on air quality or people’s health.

“For the large majority of the year, the contribution to pollution concentrations at ground level is effectively zero and well below the limits of detection. It would only be for a few hours in a year that its contribution would be measurable, and this would be at levels of less than 2 per cent of the relevant air quality standard.

“We understand the positive intentions of protesters, but it is unrealistic and irresponsible to assume that hundreds of thousands of tonnes of waste generated by North London residents can be managed without relevant infrastructure.

“Our [incinerator] project will be the cleanest in the country, using emissions control technology which exceeds that [used] in any other facility in the country.”