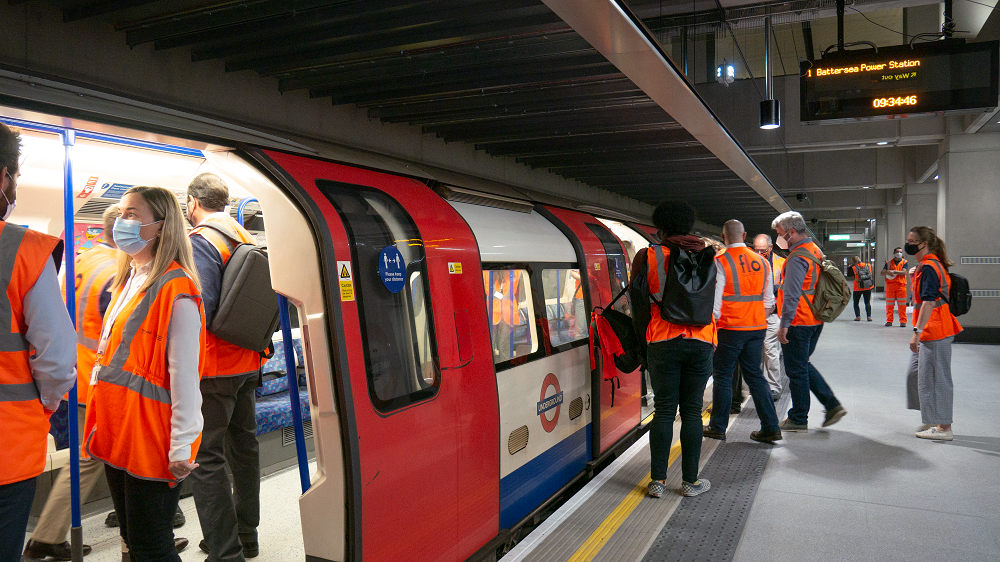 Residents have hailed the difference new Tube stations could make to their lives – and to their whole community.

The step-free stations of Nine Elms and Battersea Power Station, in Wandsworth, were launched on September 20 to connect South London to the centre of the capital.

Many residents said this could change the way they travel, like Svetla Chuktva, 40, and a mother of two girls, who lives near Battersea Power Station station.

She said: “I am so happy and it’s very practical for me, having two babies. I work in central London as a security guard and I always had to travel by car.

“Now I can stop taking the car and travel by train. I think it will also be cheaper, without having to pay for the petrol, the parking and the permit holder.”

Resident Paddy Rowe said: “The new Battersea Power Station underground station will make a huge difference to my husband and myself.

“We have not used our car much since we moved here and have now made the decision to take it off the road completely because of the new Tube station. We can visit our grandkids in South London really easily now, and vice-versa.”

Residents aren’t the only ones benefiting from the six trains-per-hour operating on the extension.

Guillermo Navarro, who works as an engineering surveyor at the Battersea Power Station development, believes that the new extension will change more than just his way of travel.

He said: “I live in Archway, so now I can arrive here without having to change the bus at Vauxhall and taking a longer route l to get to work.

“We worked all together for the past six years and it’s finally opened. I believe that as soon as the new residential area opens next year, the whole neighbourhood will look completely different.”

Connecting workers and residents is not the only purpose of the new Northern line extension.

According to the Battersea Power Station Development Company, this is the first step of a regeneration plan that will create 20,000 new jobs and inject £20bn into the UK economy.

The Mayor of London, Sadiq Khan, said during the opening day of the station: “This Northern line extension, it’s not just about travel. It will also help to support new jobs and homes as we move forward with London’s recovery from the pandemic.”

According to Transport for London project director Martin Gosling, some of the changes caused by the new Tube station are already visible.

He said: “The Battersea and Nine Elms area 10 years ago looked completely different.

“Even the new US Embassy is in Nine Elms now. All of this has really regenerated the area, and the Northern line extension is the facilitator of that.”

Carl Painter, the area manager for both stations, recalled how some of the residents back in 2015 couldn’t believe that kind of change was possible:

He said: “One of my guys used to work at the postal depot. A friend told him that they were going to knock down the area to put in a railway. He said ‘no chance, no way’. And then he ended up being one of the first people working for me on the Battersea site.”

Another positive aspect for Battersea and Nine Elms residents is the fact that many local people were employed to build the two stations.

Project director David Darcy said: “I am proud of what we have done for the community. We had more than 3,000 students involved in this project, with 1,700 days of work experience. We also employed many local people. They’ve suffered with us for seven years, but now they are saying that it’s great.”

This is also an historical moment for Wandsworth council, since this is the first extension to be added to the Northern line since Mill Hill East opened in 1941.

Pictured top: A train on the new section of the Northern line