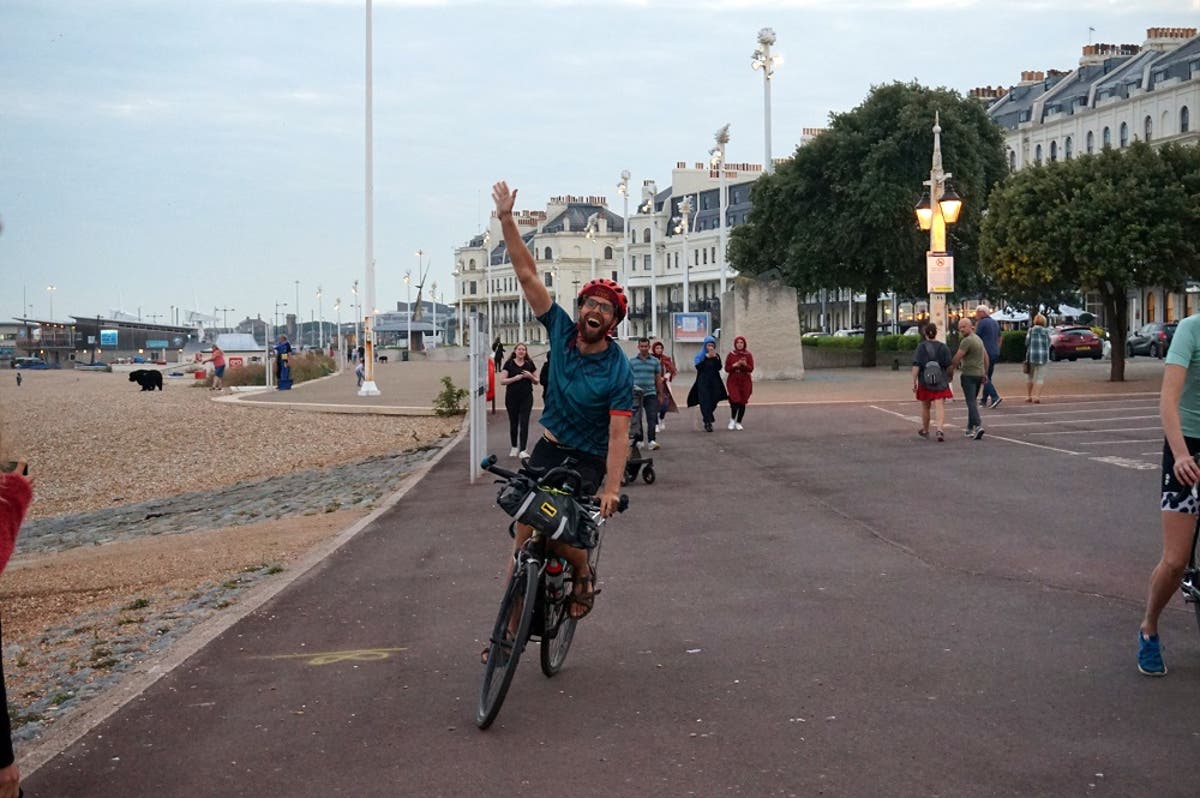 cycling duo who aimed to spell out “refugees welcome” via a tracking app have completed the mammoth challenge.

Georgie Cottle, 26, and David Charles, 39, from Thighs of Steel, a community of cyclists, set a Guinness World Record for the largest GPS drawing via bicycle (team) to raise funds for charity Choose Love.

The cycle began on August 17 in St Austell Cornwall and ended on September 18 at 7pm on Dover beach, Kent and they have raised close to £55,000 so far, with the pair thanking the British public for their generosity.

Mr Charles, from Bournemouth, told the PA news agency that he and Ms Cottle, from Glasgow, were both “pretty anxious about the final ‘e’” because it was the longest ride of the month (140km), and due to logistical challenges involved in completing a Guinness World Record.

He added: “The positivity of the 30-strong group of cyclists kept us going (and going) over the huge distance and the Kentish hills and through the unexpected heat.

“The people of Kent were fantastically generous to us, especially at the start point in Wye and at the finish line in Dover, where we were welcomed on to the beach by a group from Migrant Help, including a family of refugees recently arrived from Syria.

“It was a really meaningful conclusion to a month of hard cycling.”

Mr Charles said the success of the challenge was down to “hundreds of ordinary people doing a little something to help”.

He added: “Whether it’s a shopkeeper in South Brent giving us free snacks, a group of hikers on top of Ditchling Beacon emptying their purses into our collection bucket, or a cyclist collapsing in a puddle of sweat on Grateley station platform after riding further than they ever have before.

“These tiny acts of heroism add up to something a little bit special.

“We won’t ever forget that moment when we swooped down from the clifftops and into Dover, bike bells ringing, to be met by a cheering crowd.”

Despite the challenge being over, Mr Charles said that more can be done to help refugees and “remove the artificial barriers that are thrown up to prevent refugees from getting on with their lives”.

He said: “Refugees are banned from working. This means that they have to survive on poverty-line government support of £5.66 per day.

“It’s a lose-lose-lose situation because not only does the Government miss out on refugees’ income tax revenue, but our communities also miss out on the useful employment of builders, chefs, scientists, farmers, care workers and other essential professions.”

Donations can still be made, and once the fundraising has finished, Choose Love will decide what refugee projects will be helped thanks to the cyclists.

The link can be accessed at: https://donate.chooselove.org/supporters/lets-spell-it-out/1023/

Mr Charles added: “This bike ride hasn’t changed the world, but it will change lives”.

The Thighs of Steel team are now considering taking part in a London to Athens fundraising relay, which they have completed in the past.

The pair said that the 6,000km cycling adventure is dependent on Brexit and Covid, but even if it does not happen, they will come up with something “equally awesome”.