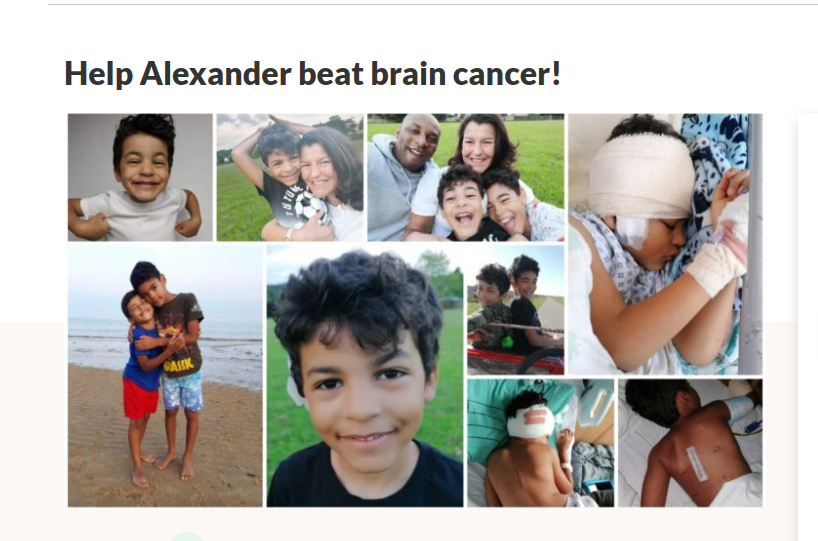 The family of a boy whose brain tumour surgery was delayed due to Covid have raised more than £69,000 of a half-a-million pound target for treatment abroad.

Parents of Alexander Josephs, aged seven, from south-east London, have been told he has a 20 per cent chance of beating his cancer.

But he might so easily have had a better chance if scans had not been delayed by wards being closed down by the Covid-19 pandemic.

An MRI scan revealing his tumour, initially thought to benign, got lost amid the chaos.

Then surgery to remove it was ­delayed three months because hospitals were overrun with Covid patients.

He was referred for a hospital scan in September following a seizure. But due to Covid pressure, it didn’t happen until mid-November and the results were then lost.

They were found in December when Alexander was rushed to A&E after another seizure. They showed a slow-growing tumour.  By Christmas, he was having up to three seizures a day.

His family have launched a crowdfunding campaign to raise more than £500,000 for the cost of his treatment.

His mother Rhonda said on the fundraiser: “The week before Christmas 2020 our hearts were broken and our little Alexander’s life was shattered.  I had rushed him to our local A&E after his second seizure where we were given the devastating news that he had a brain tumour.”

In March, the tumour was removed but a second was found growing in his spine. Five weeks later he was having seizures, as the tumour grew back.

In June he had spinal surgery, followed by a second brain operation.

Alexander has now had six weeks of intensive radiotherapy to his head and spine.

The couple, whose other son is nine, have found IOZK Immunotherapy, offered in Cologne, and, in Tübingen, a monthly individualised vaccine for patients.

Rhonda said: “Alexander loves life, family, school and is full of energy. He likes nothing more than playing with his big brother who loves him dearly. Just two years apart in age, they are brothers and best friends.

“Alexander has always been the very definition of healthy and this came as a huge shock. He has always been super strong, loves sports and throws himself into every challenge with 110 per cenr. He is the kindest and most generous little boy you could ever meet. A great sharer, always putting the wants of his big brother and friends before his own. He loves to laugh and has amazed us and the Dr’s and nurses with his ability to find comedy in some of his darkest moments.

“It is a highly aggressive high grade Glioma and within 8 weeks it had not only grown but also spread to his spine. By this point Alexander was having several seizures a day and on strong medication with terrible side effects. Our usually bright and bubbly little boy was becoming seriously ill.

“The surgeries took place in June and thanks to the care and outstanding skill of the surgical team, Alexander has bounced back again!   He is about to start an intensive 6 weeks of radiotherapy to the whole of his head and spine plus a year of chemotherapy.   We have been told that even with all of this gruelling treatment his chance of survival is only 20 per cent.

“We are terrified of what the future might hold but we are full of hope.   Alexander is a fighter!   His bravery and resilience throughout has been amazing and our love for him keeps us all going.  We want to give Alexander every chance to live so we have looked into all possible treatments all over the world and we have found something!”

The £500,000 is needed for the treatment and to travel regularly to Germany over two years. See gofundme.com/braincancerbattle to donate.