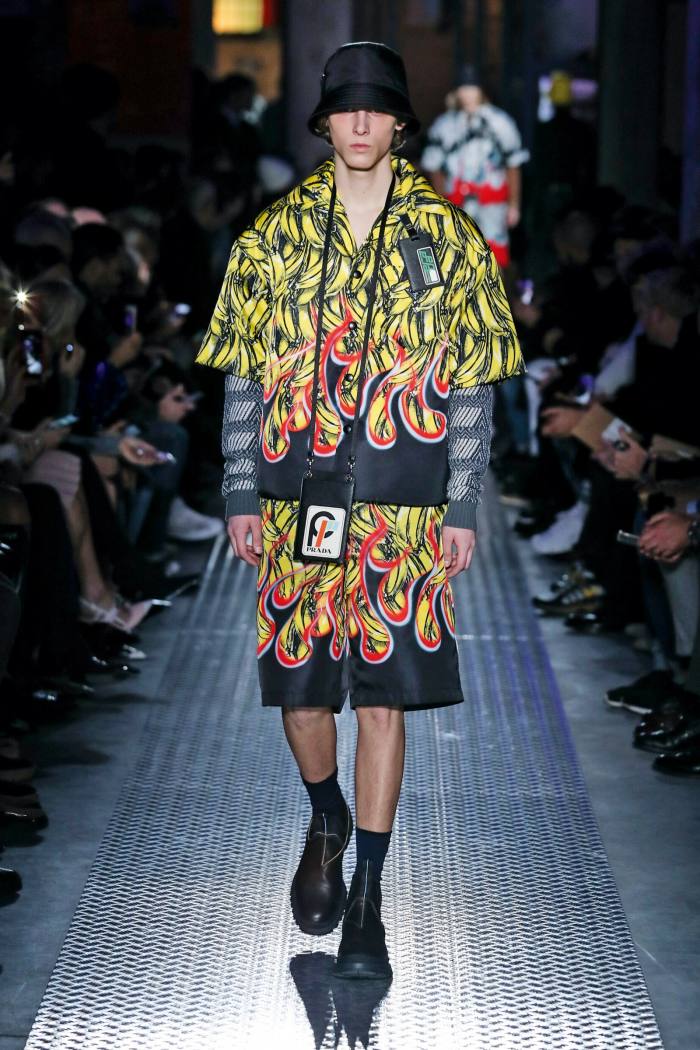 Get a shot of weekend inspiration with the best in life, arts and culture. Delivered every Saturday morning.

Sometimes a banana is just a banana. And sometimes a banana is a piece of fashion history. Rewind to Prada’s AW18 menswear show. The collection, in a bid to reinvigorate the brand, saw the return of Prada’s cult sportswear line, Linea Rossa, and various archival prints, including a hugely popular banana print first used by Miuccia Prada in her SS11 womenswear collection. Here, the bananas were decked across a men’s bowling shirt and shorts in a half-half clash with an equally garish flame print. “It was part of Mrs Prada’s use of fashion as provocation,” says writer Charlie Porter. “It was a purposely ugly print. To wear it now would be to understand the provocation and sense of ridiculousness. But also to show knowledge of Prada history. Because that print is very recognisable. It is very much a Prada banana.” 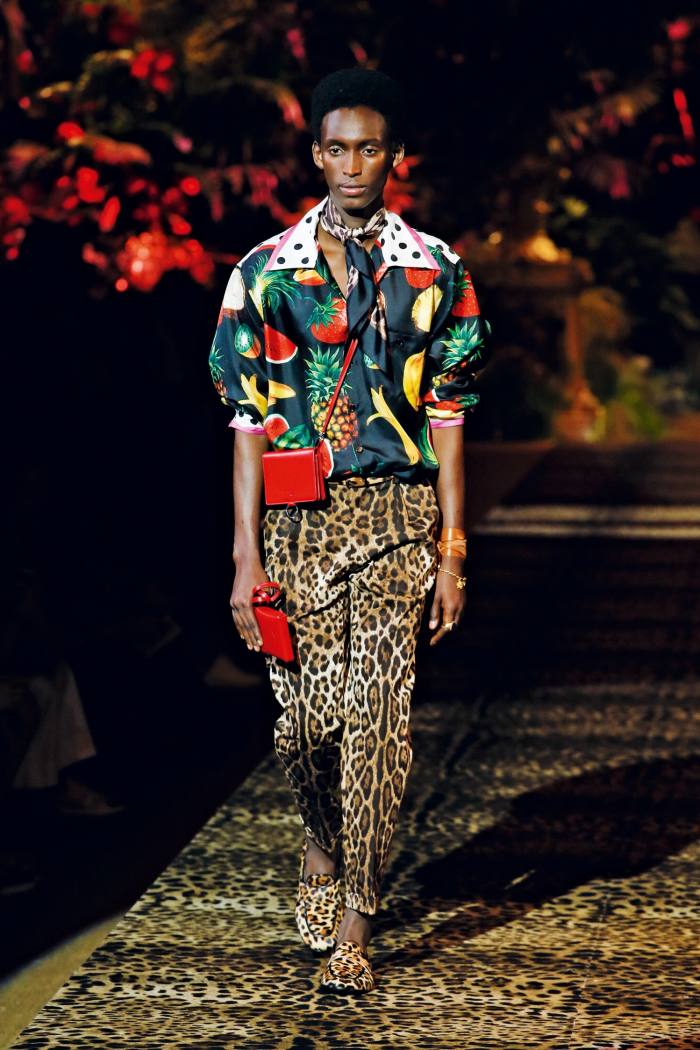 Food has long been a feature of men’s clothing. Fruit, especially. Chances are, if you hit the beach this summer, you donned a pair of swim shorts or a Hawaiian shirt with something juicy and edible on it. An orange. Some cherries. Maybe even a pineapple. But as menswear has branched out, so has its use of food. When Paul Smith put plates of spaghetti on shirts in the mid-1990s, inspired by the kitsch plastic displays he discovered in Tokyo, it spoke of his love of Japanese culture in a way that appealed to his design-conscious customers. When Sacai’s Japanese founder/creative director Chitose Abe included a T-shirt and hoodies in her AW19 menswear collection with the logo for Bar Italia on them, she was showing affection for a London institution that she visited as a student, which likewise chimed with her urbane clientele. Food communicates who we are better than almost anything. Its signifiers are potent symbols. 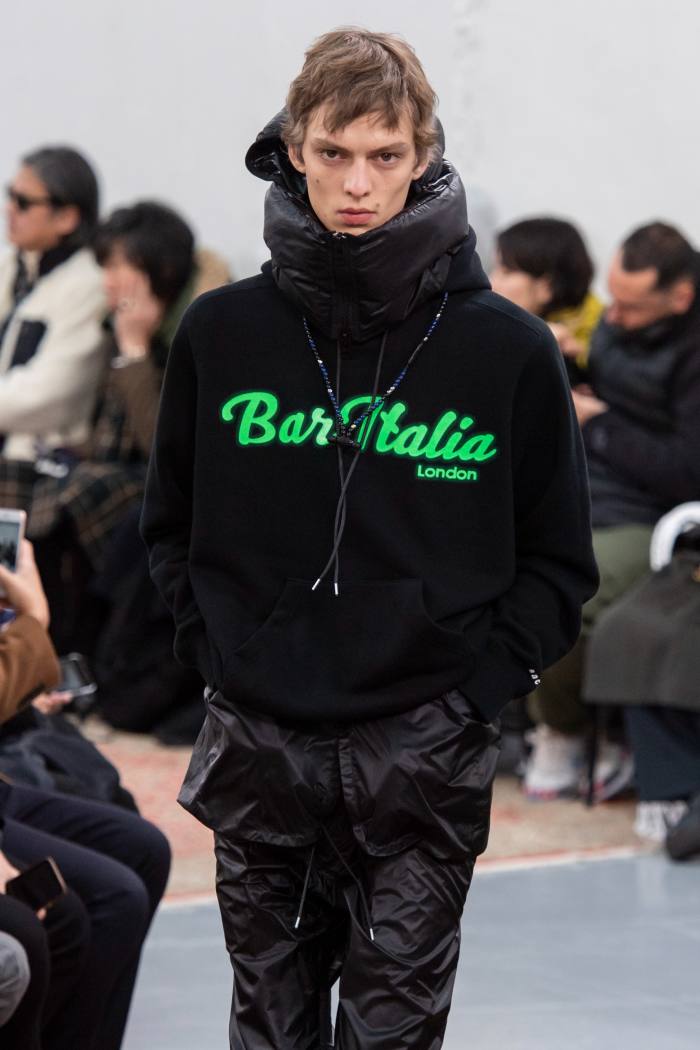 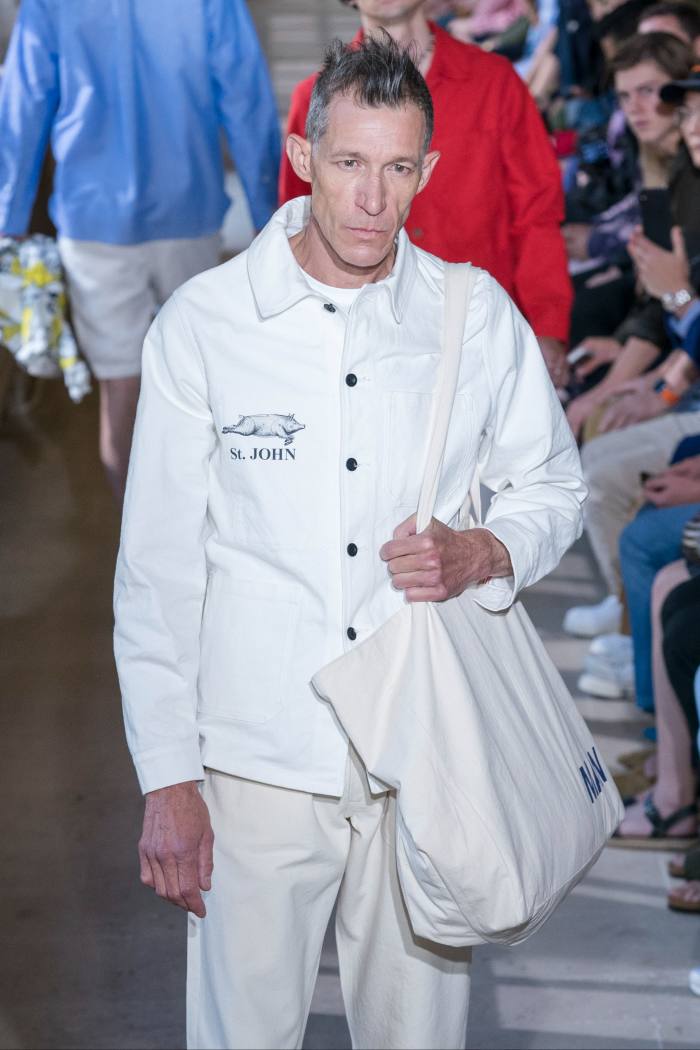 Junya Watanabe of Comme des Garçons has always been astute in understanding the hipster man who wears his clothes, including knowing where he eats. Hence the inclusion in his SS20 menswear collection of a white workwear jacket emblazoned with the insignia of London nose-to-tail restaurant St John. For Trevor Gulliver of St John, there was a “frisson of excitement” in seeing their pig logo on the catwalk. But the restaurant’s “sense of assurance and comfort” (or what his partner Fergus Henderson calls “our quiet longevity”) is precisely what made it a good match. Comme des Garçons embodies similar values. St John is now collaborating on a range with Drake’s (released next spring), which includes bleu de travail jackets inspired by those worn by Fergus.

Continuing the trend, Watanabe’s SS21 collection featured T-shirts printed with the covers of cookbooks by sandwich maestro Max Halley and Australian chef Josh Niland. Halley recalls seeing a teenage girl on a train to Cornwall wearing the “Max’s Sandwich Book” T-shirt. “Twenty years ago,” he notes, “it would have been a band T-shirt.” Now, a north London café can occupy the same territory, its imagery worn as a tribal badge of honour. 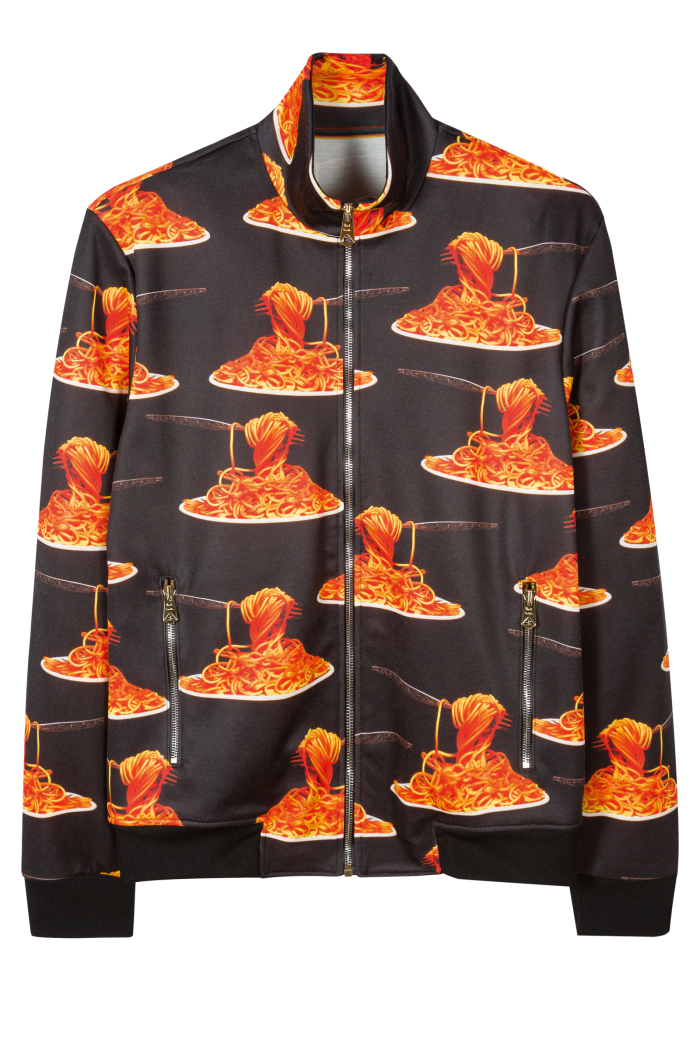 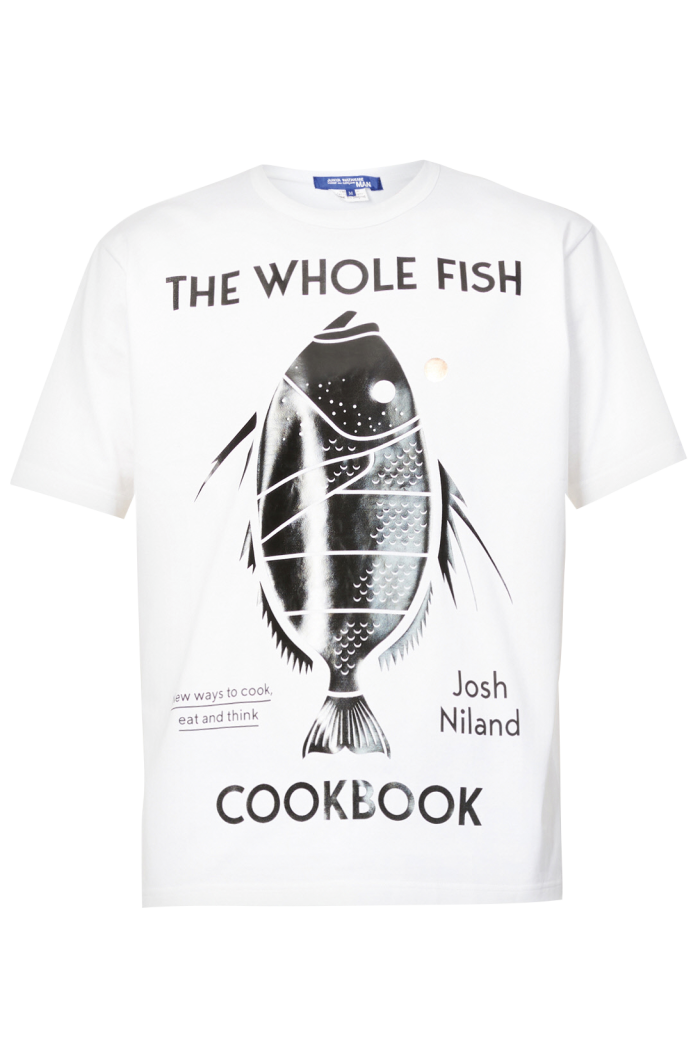 The pandemic saw an explosion in restaurant merchandise as owners sought to supplement their incomes with T-shirts and tote bags. Brands got involved. Carhartt WIP in Shoreditch collaborated on a range of T-shirts with Dom’s Subs, which opened last year, to help give the Hackney café exposure as a pandemic success story. “I guess the Carhartt guys liked our sandwiches,” says Dom’s Subs co-owner Greg Boyce, whose previous venture, Visions Canteen, had been around the corner from the Carhartt store. Championing local talent made sense. 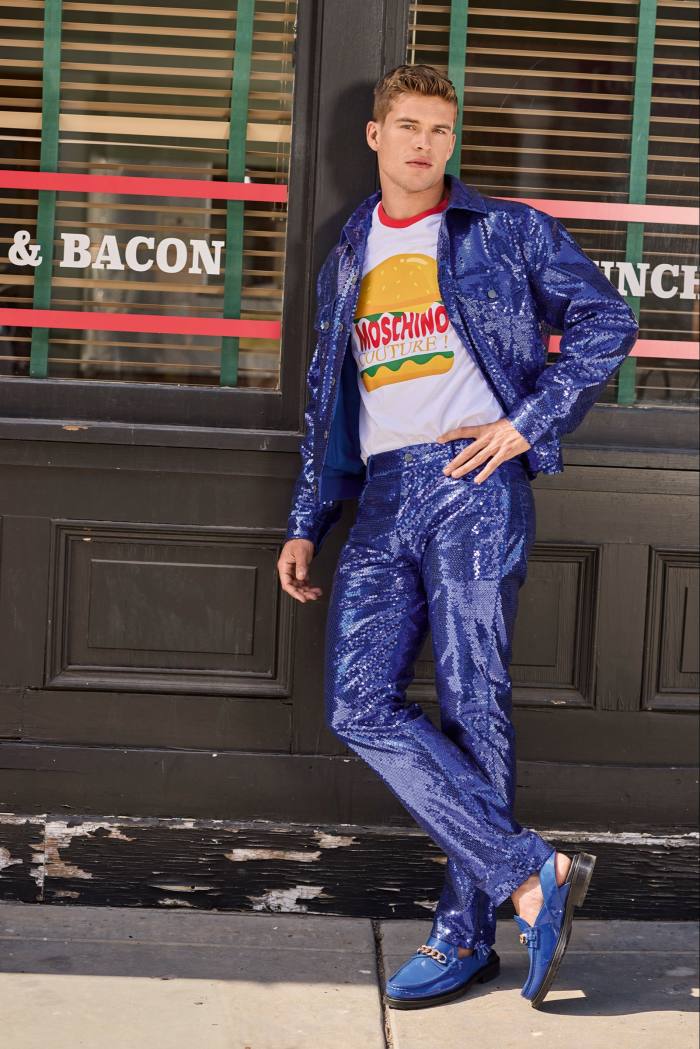 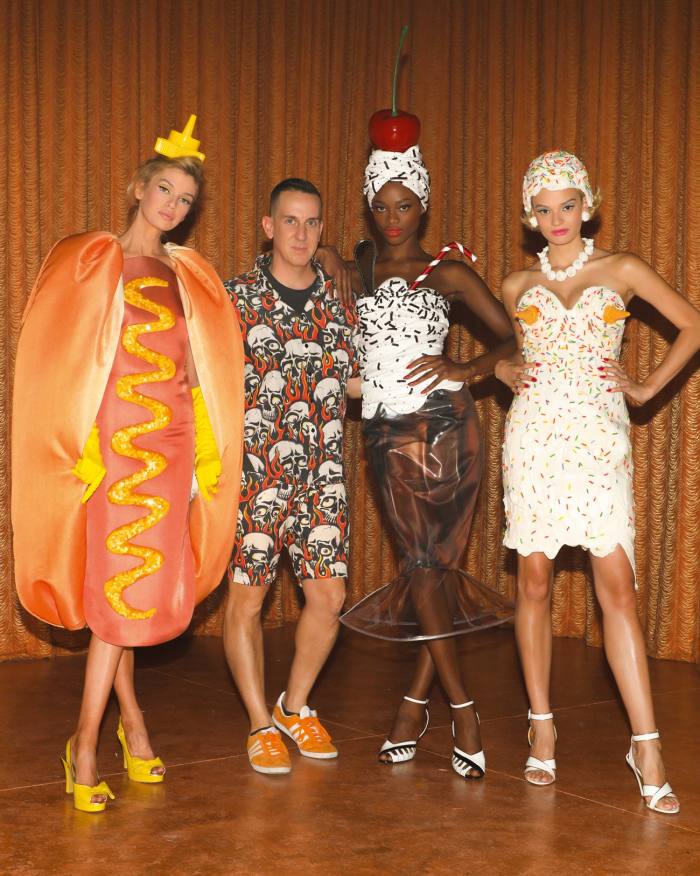 The pandemic changed our relationship with food – a shift explored by JW Anderson’s AW21 collection, with tops covered in humble radishes, butternut squash and peaches. Anderson says using vegetables was about “re-proposing the normality that surrounds us” and “the beauty you can find in everyday items”. I’ve become obsessed with one of the polo shirts. It features a massively enlarged radish across its front, its leaves like floppy Dumbo wings. I can’t decide if it’s awesome or absurd. I guess that’s fashion for you. Still, with strawberries deployed like rave symbols in Anderson’s menswear SS22 collection and every kind of junk food showing up in Moschino’s SS22 show, don’t expect edibles to go out of fashion any time soon.

Fruit and the loom 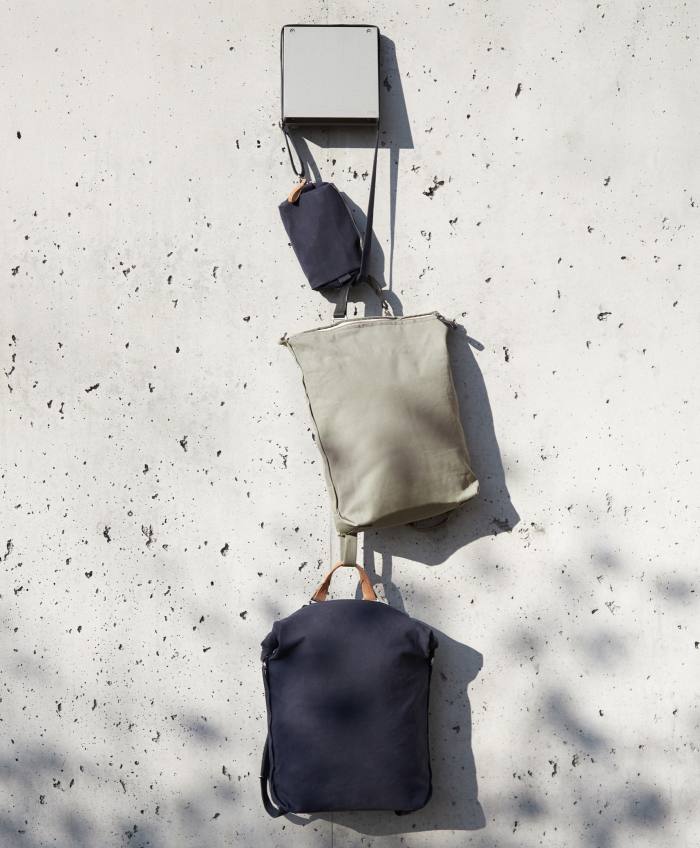 How do you solve a problem like agricultural waste? Materials-science company Pangaia has devised a good solution. In its mission to reduce the world’s reliance on water-intensive cotton, the brand has launched Frutfiber, a sustainable alternative made from banana, bamboo and pineapple leaves. These leftovers are typically burned or thrown in landfill, which harms local ecosystems by reducing the long-term fertility of soil. Pangaia proposes to flip this cycle on its head. “The goal is to promote bio-diversity and regenerative agricultural systems,” says chief innovation officer Dr Amanda Parkes. The resulting collection (from £75) consists of simple athleisure pieces for men and women: roomy T-shirts, easy dresses and lightweight shorts. Unlike scratchy, burlap-based natural fabrics, the Frutfiber collection is ultra-soft and comes in four vibrant colours. And the experimentation doesn’t stop with bananas. “We’re working to bring an entirely new material library into commercial reality,” adds Parkes. 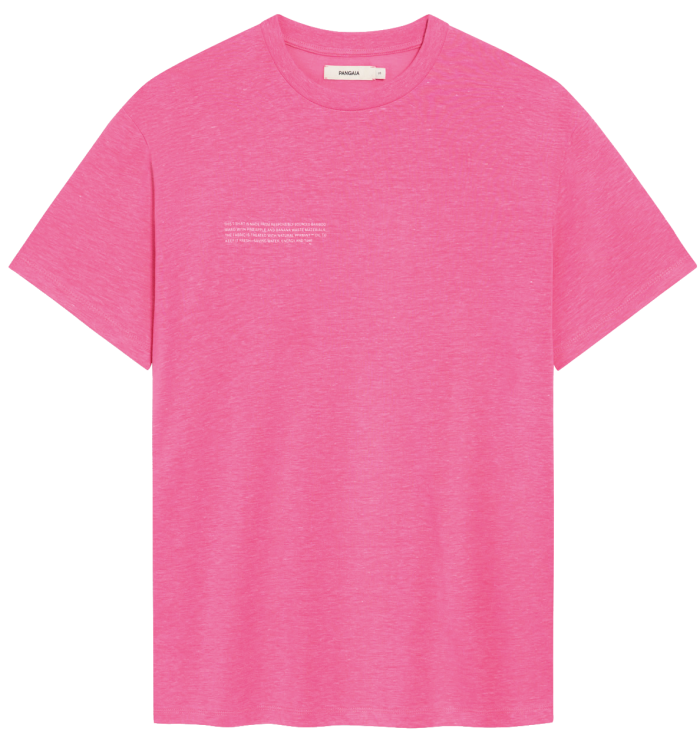 More fruity experiments come from Vegea, the Milan-based textiles hub creating imitation leather out of grapes. Pangaia has collaborated with it on a pair of monochrome sneakers (£153) in a bid to offset the 6.5 billion litres of waste (grape skins, seeds and stems) produced by the wine industry each year.

For the Swiss makers of Bananatex, the world’s first technical fabric made entirely from banana plants, using fruit fibre allows them to give small farming communities a stable income. It’s also incredibly durable. Minimalist accessories brand QWSTION uses Bananatex for laptop sleeves (from €110), rucksacks (€275) — and now a furniture collection with Dübendorf-based Lehni. “We believe the future of fashion will be based on a variety of alternatives,” says co-founder/CEO Hannes Schoenegger. “Bananatex can be one of them – and will continue to contribute to a smaller ecological footprint.”