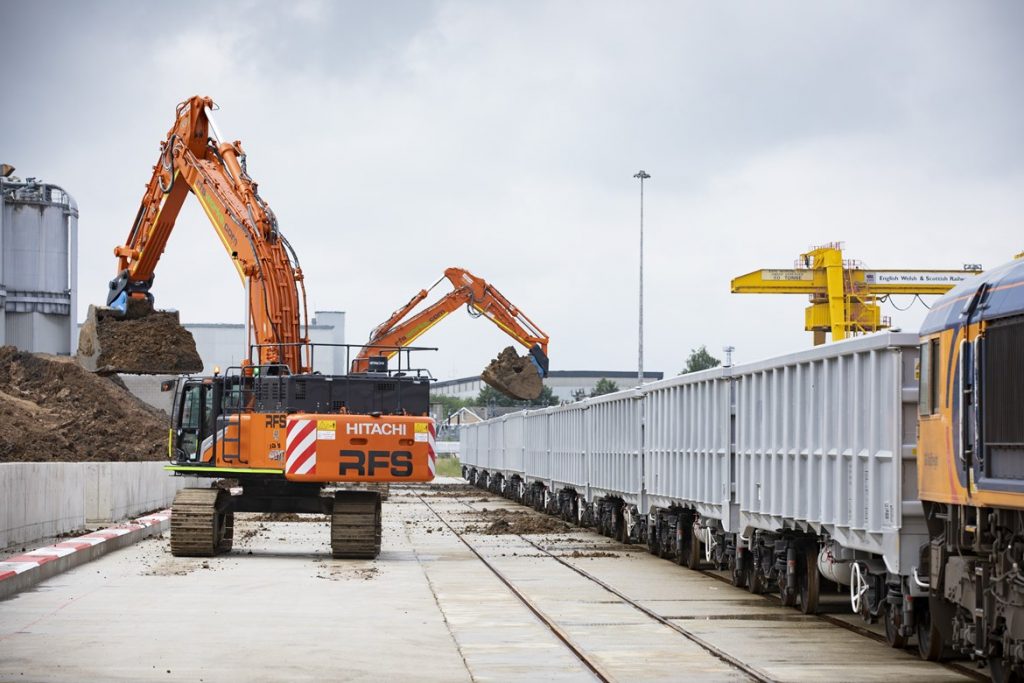 Undeterred by the unseasonal weather, a digger continues methodically depositing earth into nearby logistics train wagons; its bright orange arm a stark contrast to the day’s sombre skyline.

It is a taster of what is to come with work at the hub near Willesden Junction set to dramatically ramp up over the coming years.

Officially unveiled by HS2 Ltd yesterday, the 12ha North-West London site has been dubbed the “beating heart” of the logistics operation behind HS2.

It is here that earth from the 40km of tunnel will be processed and critical construction materials, such as pre-cast tunnel segment rings, will be delivered.

The logistics trains are operated by GB Railfreight, and the first departed the site at the end of June, taking 1,470t of spoil to Barrington in Cambridgeshire.

The hub has been constructed and will be operated by HS2’s main works civils contractor Skanska Costain Strabag joint venture (SCS JV), with SCS JV managing director James Richardson describing the start of operations as “a massive step for the project”.

“We’re very close to launching the first two TBMs in West Ruislip but the rest of the projects themselves through London are at that stage where they’re starting to produce materials and need materials in a much greater capacity,” he said.

“So having the logistics hub ready in front of those big tunnel drives is vital to make sure the site itself runs efficiently and we don’t get any issues with delays.”

All in all, construction of HS2’s London tunnels will require 5.6M.t of earth to be excavated. After being processed at the site near Willesden Junction, it will be taken by train to three locations across the UK – Barrington, Cliffe in Kent, and Rugby in Warwickshire.

It will then be put to reuse filling voids which will be used as a basis for redevelopment, such as house building.

In addition to this, the Willesden Junction site will also receive over 100,000 pre-cast tunnel segment rings which will be used to form the walls of the London tunnels, delivered by rail from UK manufacturing sites.

At peak operation, eight trains per day will depart and arrive at the logistics hub, removing one million lorry movements from UK roads.

“Everything we do here we’re trying to do in a greener way and reduce carbon,” Richardson said. “We’re also trying to do it in a safer way and make sure that our neighbours are not disturbed.

“Rail cuts out around 40% of the carbon emissions and with regard to safety it takes vehicles off the road. From an efficiency point of view it’s a cost effective way to remove this material.”

The whole operation is being coordinated from a refurbished building on the site. Sheffield based SME 3Squared has developed a bespoke rail logistics software solution to manage and track the railway materials movements in and out.

This takes the form of nine large screens in the middle of the building. On one screen, a graph forecasts material coming in to different construction sites. This enables train, asset and cost plans along with stockpile management.

Another screen shows orders placed electronically, while the next shows confirmed orders. The middle screen is a map of the Willesden Junction yard and wagons currently on site, and a GPS map beside it shows trains currently running between the logistics hub and other sites.

“There are several benefits to the logistics hub – not just the logistics around how we move the material through multi-modal forms, but also the big step we have is the capture of data,” Richardson said.

“We can track our vehicles and see how efficiently they’re being used. We can see where efficiencies need to be driven.”

The London Logistics Hub sits on the old Freightliner Terminal site that first opened in 1967. It went on to become one of nine regional freight terminals developed specifically to handle Channel Tunnel intermodal traffic but eventually went into disuse in 2005.

However, the site’s connections to the conventional railway make it an ideal location to coordinate HS2’s London logistics operation.

Overall, the main challenge in setting up the hub has been bringing the combination of the logistics teams, organisations like GB Railfreight, and the operations team together, while also embracing the hub’s “cutting edge” technology, Richardson said.

He added: “So it’s a matter of being able to fit all that together in a way that gets the maximum out of it for us.”