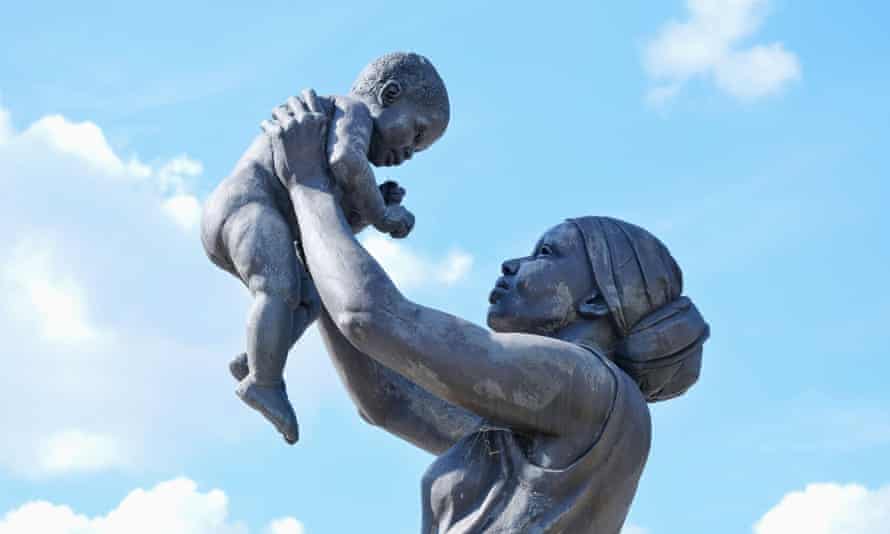 A statue commemorating the 40,000 Windrush and Commonwealth midwives and nurses who have answered the call to work for the NHS has been unveiled in London.

The granite sculpture of a woman holding a baby outside the Whittington hospital in Holloway was erected after a three-year campaign and crowdfunding effort by the Nubian Jak Community Trust and its founder, Jak Beula.

“We finally have something that symbolises their experience,” he said. “We needed a legacy – a monument that people can visit that’s quite healing and inspiring and will be a symbol of pride, courage and dedication.”

A shortage of nurses in the early days of the NHS led to recruitment campaigns in Commonwealth countries from 1948 until the mid-1970s, but the Windrush generation were seldom recognised for their efforts.

One of the midwives, Sherrill Gregory, who is 72 and worked in the NHS for 30 years, helped raise some of the £100,000 required to erect the statue. She said it was not until the Windrush scandal that she felt their role had been acknowledged.

“Until the evidence of the hostile environment came to light, I don’t think people considered what it really meant – the difficulties, the challenges and the triumphs,” she said. “I think only now are we beginning to get the full picture.”

Critics of campaigns such as Rhodes Must Fall have called on people to erect new statues, rather than remove ones of slave traders and colonialists such as Cecil Rhodes or the Bristol slave trader Edward Colston. “There are only two other statues dedicated to black women in the capital,” Beula said. “Taking the initiative to do it and put up a statue isn’t an easy job, not least the problem of finding a site and getting funding. It’s taken us three years. Crowdfunder were very helpful and gave us a lot of support.”

Rob Love, the co-founder of Crowdfunder, said: “Nubian Jak came to us because there wasn’t a charity or campaign that represented their interests. We’re proud to support groups like Nubian Jak that are looking to change society.”

The two other statues representing black women are of Mary Seacole, the Jamaican nurse who tended soldiers during the Crimean war, at St Thomas’ hospital in London, and “Bronze Woman” in Stockwell, south London, inspired by a poem by Cécile Nobrega.

“I know definitely with the Mary Seacole there were issues around where it should go and some people feel it’s too prominent,” said Gregory, who made significant contributions to research on sickle cell anaemia in her career. “There’s huge imbalance in every area. And it’s those with the loudest voices and the most powerful voices who get what they want.”

She added that progress on racial prejudice had been slower than she imagined it would be when she first arrived in Britain. “The sad thing is that although there have been some shifts, the shift has not been as drastic as we would like to see – it’s very slowly been chipped away.

“The racism that we experienced was not only in the workplace but everywhere, and it affected our families, our living conditions and even our health.”

The stories of some of the nurses and midwives whose experiences inspired the statue are also told in a book by Beula, Nursing a Nation, which includes contributions from Gregory and other nurses from the Whittington. The hospital helped with funding for the statue along with Islington council.