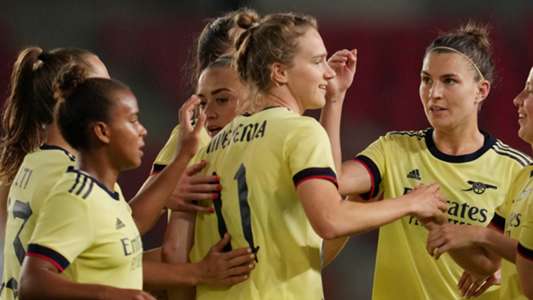 The 25-year-old, who now has a century of goals for the Gunners after a UWCL hat-trick, has a contract in north London until next summer

Arsenal head coach Jonas Eidevall spoke about the future of star striker Vivianne Miedema on Thursday night, after the 25-year-old scored her 100th goal for the club.

Miedema hit a 12-minute hat-trick in a 4-0 win over Slavia Prague, a result which, combined with the 3-0 victory in the first leg, helped the Gunners secure their place in the UEFA Women’s Champions League group stages.

The Dutch international’s contract in north London expires this coming summer and, as one of the best players in the planet, she will have plenty of options should she choose not to renew her current deal.

Speaking after the win over Slavia Prague, Eidevall told reporters: “Nobody is trying to hide that we would like Viv to stay on, but I understand from Viv’s perspective, what kind of player she is, it’s important for her to see what the direction the club is going [in]. For her, when the time is right to, [she will] take a decision about her future.

“I am of that opinion, when you see the squad that we have today, of course there can be external players coming in, making us a little bit better. But I think the most important thing will be to try and keep the foundation of this group of players that we have together, and keep on building with them.

“That’s sometimes [difficult] in women’s football, with a little bit shorter term contracts, if you would compare to men’s football. We need to do both – extend some contracts and get the best players possible from an external point.”

What is Miedema’s goal-scoring record?

Miedema’s 100th goal came in just her 110th game for the club, a record which incredibly includes no penalties.

“It’s not one in one, is it?” she joked, speaking to the club after the game. “It’s special. I’m happy that I reached that. Numbers are there for other people probably more. I’m trying to appreciate the 100 goals and the girls were really nice about it.”

The 25-year-old joined Arsenal in 2017 from Bayern Munich, winning the Continental Cup in her first season. The following year, she helped the Gunners win their first Women’s Super League title in seven years, scoring 22 goals in 20 league games, a single-season record.

It’s one of many records she has to her name, having become her country’s all-time top goalscorer at the age of just 22 later that year. She also smashed the record for the best ever tally at a single Olympic Games this summer, scoring 10 times in four matches.

When is the UEFA Women’s Champions League group stage draw?

Arsenal will find out their opponents in the next round of the Champions League on Monday 13 September.

The English side are in pot two, alongside seven-time champions Lyon, two-time winners Wolfsburg and Iceland’s Breidablik.

Barcelona, Paris Saint-Germain, Chelsea and Bayern Munich make up pot one, with the likes of Juventus and Real Madrid in pot three.