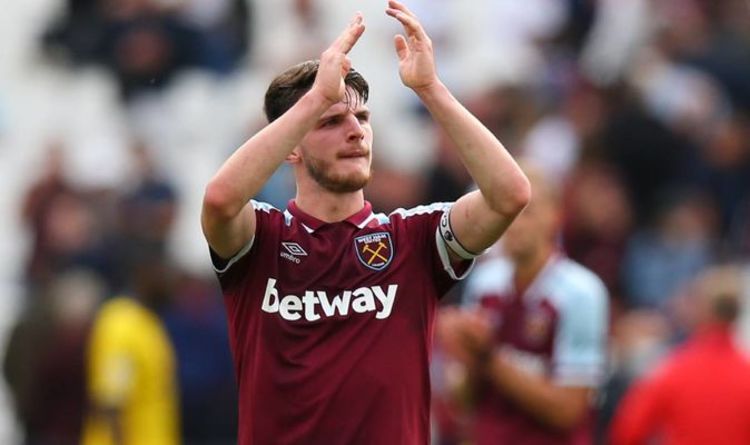 Chelsea may have missed out on Declan Rice in the summer transfer window after West Ham priced him at £100m but they are not giving up entirely. Nevertheless, there are plenty of other options on Thomas Tuchel’s wish list.

Chelsea have a three-man shortlist prepped in case a transfer for West Ham star Rice does not go through.

The Blues tried to prise the England international away from east London only to be told he would be worth £100m.

That put them off trying any further, instead gunning for Romelu Lukaku – who they did bring in for £97m.

Saul Niguez was brought in from Atletico Madrid on loan to appease Tuchel’s wishes for a midfielder.

But Rice remains a top target at Stamford Bridge – especially after the 22-year-old was left furious with West Ham’s off-putting price-tag.

Nevertheless, Chelsea will not wait around for eternity for a defensive midfielder with the future in mind despite the success of Jorginho and N’Golo Kante.

The former will turn 30 this December and has been talked up to return to Italy while the latter has also reached the big three-oh while incurring some injury problems as of late.

According to Eurosport, Chelsea have three options as back-up to Rice should the Englishman fail to return to west London, where he began his career before leaving as a 14-year-old.

The first option would be to snap up Saul from Atletico Madrid.

An agreement is already in place should the Blues prefer to do so after putting a clause that means the loan can be made permanent for around £30m.

That could be the cheapest option, especially should Saul impress during the season.

Tabs are also being kept on Borussia Dortmund star Jude Bellingham, who already looks the part despite being just 18.

But the German club are in no mood to sell – especially with a summer coming up where it looks likely they will lose Erling Haaland.

The third name on the list is Monaco ace Aurelien Tchouameni, who was also chased by Manchester United, but that name has been linked more tentatively as a last resort.