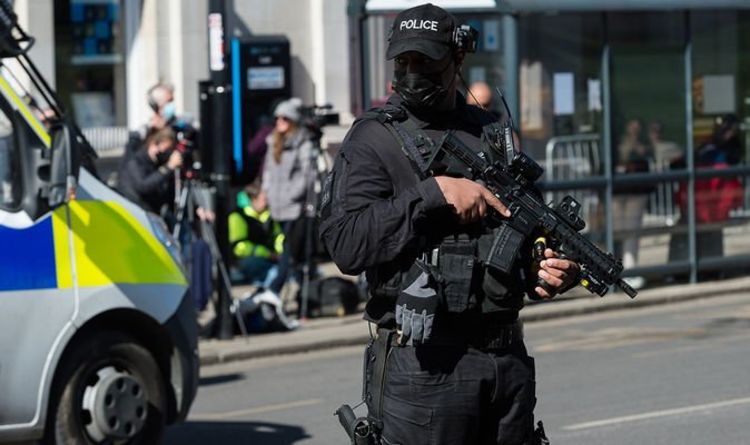 Pictures published online showed armed police taking cover around Clarence Gardens on the Regent’s Park Estate, including one female officer behind a tree. A Met Police statement issued today said officers arrested a 22-year-old man on suspicion of possession of a firearm with intent on Tuesday night. He remains in custody.

A 17-year-old boy was arrested on suspicion of possession with intent to supply and further arrested for possession of a firearm with intent. Both remain in custody.

The raids are related to an incident in which shots were fired into a crowd in Camden shortly before 10:10pm on Saturday.

A large group was enjoying a barbecue in a communal open space in Clarence Gardens when up to five unknown males began shooting into the crowd injuring four people.

Police, including firearms officers, attended together with paramedics from London Ambulance Service.

One of them has since been discharged, with the other three still in-patients – although their conditions are not believed to be life threatening.

JUST IN: EU single market sham – bloc has made £1.2trillion out of UK

The Specialist Crime North Reactive team is investigating the incident.

DS Val John-Baptiste, of Specialist Crime North, said: “I need to hear from anyone who witnessed the incident or saw anything suspicious in and around Clarence Gardens, NW1.

“We thoroughly investigate every shooting in London – every incident and every weapon on our streets is of great concern to us.

“We know that Londoners feel exactly the same, and that’s why it is vital that anyone with information shares with us what they know, either directly with police or anonymously via Crimestoppers.”

A police spokesman added: “Local residents can expect to see an increased police presence in the area while the investigation continues.

Police are asking anyone with footage of the incident and or any information to call police on 101 or tweet @MetCC quoting reference CAD 7619/14 August.

Information can also be provided anonymously to Crimestoppers, on 0800 555 111 or at https://crimestoppers-uk.org/.

“Anyone with concerns is encouraged to speak to the officers or to make police aware using the two contact options above.

The raids follow another shooting in Newham in east London last night which left two men injured – with one of them in critical condition.

Both victims were shot in the Upton Park area of Newham, with police receiving an emergency call at about 10.50pm.

Upon arrival, they found both suffering from gunshot wounds.

A Metropolitan Police statement said: “One man, aged 20, remains in a critical condition; the injuries for the second man, aged 18, are not life threatening.

“A crime scene remains in place.

“There have been no arrests; enquiries continue.”

Police have been actively targeting gun crime in the capital in recent weeks, and last month swooped on addresses across London, executing 35 warrants, making 21 arrests and seizing six illegal firearms as well as a large number of knives.