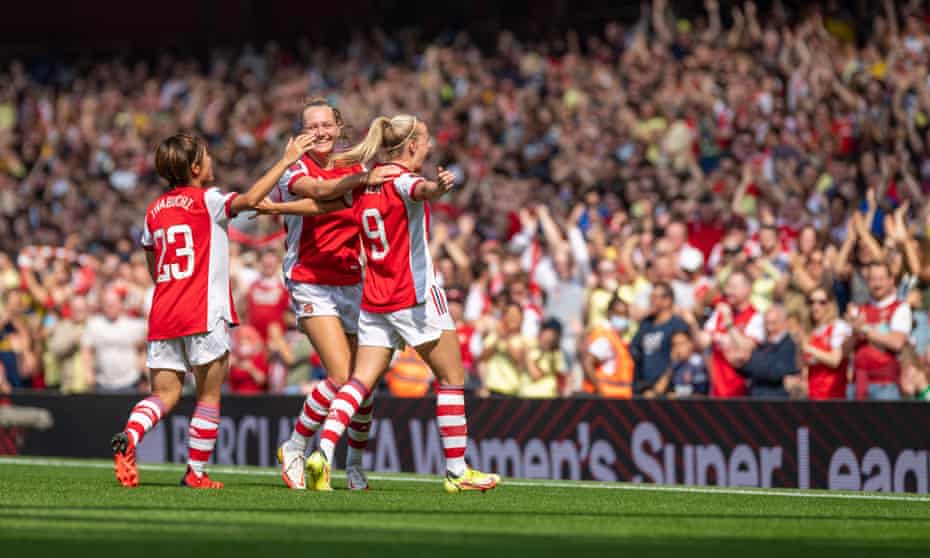 Jonas Eidevall, Arsenal’s new manager, cautioned that his side’s thrilling defeat of Chelsea for the first time in close to three years is “one game out of many”, after they beat their London rivals 3-2 at the Emirates Stadium.

The Women’s Super League record goalscorer Vivianne Miedema opened the scoring in style, wrong‑footing Jess Carter to squeeze the ball between the near post and a diving Ann-Katrin Berger. Beth Mead added two – the first lashed in from a tight angle, the second offside but not flagged – after Erin Cuthbert had levelled. A header from Pernille Harder closed the gap but a late surge could not prevent Arsenal from securing a first league win against Chelsea since their 5-0 defeat of the Blues at Kingsmeadow in October 2018.

Emma Hayes, Chelsea’s manager, was not happy with Arsenal’s third. “It was two yards offside,” she said.

“The positive is there’s goals, fans, a brilliant weekend for women’s football; there’s been good attendances. The negative thing is that by putting our product in such a good place, on Sky in particular, it means that everyone is asking the question: ‘Well why haven’t we got goalline technology and why haven’t we got VAR?’

“I heard before the game that there were conversations around it and it’s not a priority because it’s too expensive. Well I think we sell our game short, because we’ve all got used to VAR and goalline tech and not having it in the women’s game makes us feel like second-class citizens.”

Arsenal have struggled against Chelsea in recent years, winning only two of the past 15 games between the pair and none of the five most recent matches – a late own goal denying them victory in a 1-1 draw at Borehamwood in November last year.

Arsenal are a different force now, though. With Eidevall in and a clutch of world-class attacking talents added to the squad in Japan’s Mana Iwabuchi, England striker Nikita Parris and the United States’ World Cup winner Tobin Heath, they are a team intent on not slipping as far behind as they did last season when finishing nine points off top and seven behind Manchester City in second place.

Hayes is further into her cycle with her current Chelsea crop and this summer was relatively quiet, with young talent coming in; Aniek Nouwen recruited from PSV before last season ended and Lauren James added from Manchester United. The champions may not have strengthened to the same extent or had the benefit of competitive fixtures before this WSL opener (Arsenal have played three Champions League qualifiers), but they have the advantage of a settled and seasoned squad.

There was, however, some surprise that Hayes did not dip into the market to strengthen her full-back options with Carter and Niamh Charles having struggled in the Champions League final 4-0 defeat by Barcelona and Maren Mjelde still to return from a knee injury. “It’s not that we didn’t target players, we just didn’t get the ones that we wanted,” Hayes said after her defence was run ragged in north London.

It was “about time” Arsenal Women played a league fixture at the Emirates Stadium, according to Miedema before the game, and while the crowd did not live up to record-breaking numbers seen two seasons ago the mood was good. With 8,705 tickets sold, the fans were loud and the celebrations exuberant.

“I’m a passionate person,” Eidevall said of his own celebrations. “Football is about emotions, it’s about connecting people, the football club with the team and the team with the fans. We work so hard so if we don’t show emotions when we celebrate and win then when are we doing it?”