Five attackers showed up at the barbecue in Clarence Gardens and fired ‘indiscriminately’, police said

Three people have been arrested after a woman in her seventies was caught up in a shooting as she asked for music to be turned down at a barbecue.

Up to five attackers arrived at the gathering in Camden, north London on Saturday night and ‘indiscriminately discharged a firearm injuring four people’, police said.

Two women, aged 19 and 73, a 17-year-old girl, and a man, aged 28, were rushed to hospital. Their conditions are not thought to be life threatening and one has since been discharged.

This morning, the Metropolitan Police revealed a 22-year-old man was attested on Tuesday on suspicion of possessing a firearm with intent.

A 17-year-old boy was arrested on suspicion of possession with intent to supply. He was further arrested for possession of a firearm with intent. All suspects remain in custody. 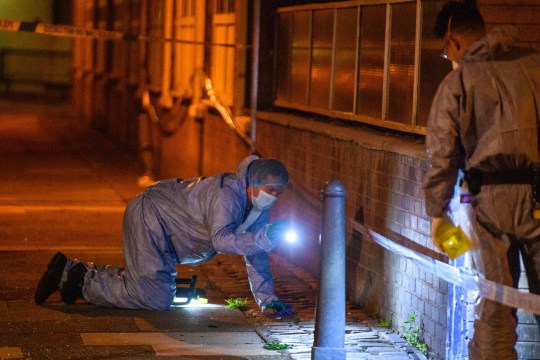 Witnesses say a woman in her seventies had only come over to ask people to turn the music down when she was caught up in the crossfire (Picture: LNP)

Detective Sergeant Val John-Baptiste said: ‘I need to hear from anyone who witnessed the incident or saw anything suspicious in and around Clarence Gardens, NW1.

‘We thoroughly investigate every shooting in London – every incident and every weapon on our streets is of great concern to us.

‘We know that Londoners feel exactly the same, and that’s why it is vital that anyone with information shares with us what they know, either directly with police or anonymously via Crimestoppers.’

24 Hours in Police Custody Murder on the Doorstep: What happened to Robert Parkins?

Boards on doors and windows create challenges for fire crews in London, Ont.