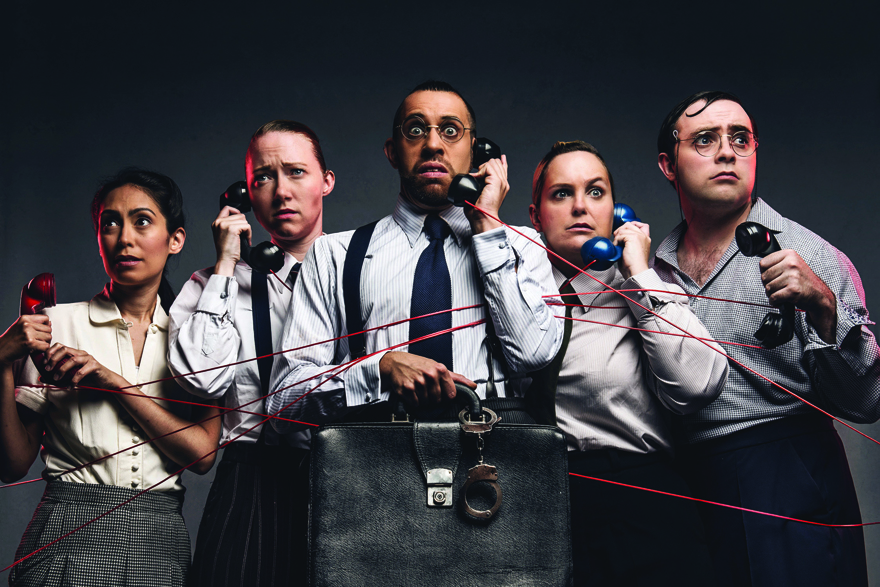 I haven’t laughed so much since 2019. Hilarious fringe comedy group Spitlip, who tell us they have spent lockdown “weeping and eating biscuits,” have bounced back on stage with a veritable smash hit, writes Christopher Walker.

The fast-paced show, a mixture of comedy and musical, is simply brimming with energy.

A little light relief is well overdue, and Operation Mincemeat at Southwark Playhouse delivers it.

There is a real plot line and it’s a good one. Though possibly the most unusual choice for a comedy musical in the history of London theatre.

Operation Mincemeat was a daring British intelligence operation which helped turn the tide of the Second World War.

A corpse was sealed in an air-tight canister and then taken by submarine to the south of Spain and dumped there, faking an aircraft crash.

MI5 had dressed the body as a British officer, and attached a briefcase containing falsified documents and details of a secret plan for a British invasion of Sardinia, launching the liberation of Europe.

The British knew the Spanish authorities would hand the papers over to the Germans and it was all a ruse, since the real plan was Sicily.

When the Nazis subsequently moved all their troops to Sardinia, MI5 cabled Churchill “Mincemeat swallowed rod, line and sinker by the right people.”

From this rich material, musical director Felix Hagan has churned out a string of lively numbers ranging from 1940s style show tunes to the most up-to-date hip-hop rap.

There is a wonderful show-stopping number at the beginning of the second Act, a Third Reich Rap, that brings the house down.

Felix Hagan is definitely one to watch.

The writing is first class, with plenty of wisecracks. The two central characters are two likeable, if apparently clueless, public-school eccentrics, Ewen Montagu and Charles Cholmondeley.

Monty meanwhile, is that kind of smooth ‘bluffer’ we all know only too well in British public life, and Natasha Hodgson’s quite top-class performance makes him totally believable.

The remaining three members of Spitlip are equally talented and portray a huge variety of roles.

Zoe Roberts is particularly wonderful as the hapless Haselden, the Sangria quaffing British agent in Spain. There is a brilliantly executed scene where the briefcase is swapped around.

She also gives us the young Ian Fleming, who was peripherally involved in the operation and already dreaming of his future James Bond novels.

As the bombs drop on London, Claire Marie-Hall gives a haunting rendition of “Let me Die in Velvet…” in a Mayfair nightclub.

She also plays Monty’s much put-upon secretary, Jean Leslie who’s under the strict tutelage of Miss Hester Leggett, the quite marvellous Jak Malone, the forgotten women behind the operation.

Jak Malone is so talented he seamlessly switches between that role, the submarine captain, and even the leading pathologist Sir Bernard Spilsbury.

He holds the audience in his hands throughout and brings tears to our eyes.

It’s all good fun, and the numbers are tightly choreographed by Jenny Arnold.

Though we should not perhaps lose sight of the serious point at the heart of this story.

The future of Europe was hanging in the balance, and Monty – in real life no bungler, but a brilliant barrister turned spy – understood the implications of what would happen if the Nazis won. He was himself Jewish.

Do go to this show, but maybe also raise a glass to Monty and thank God for his bluffing.