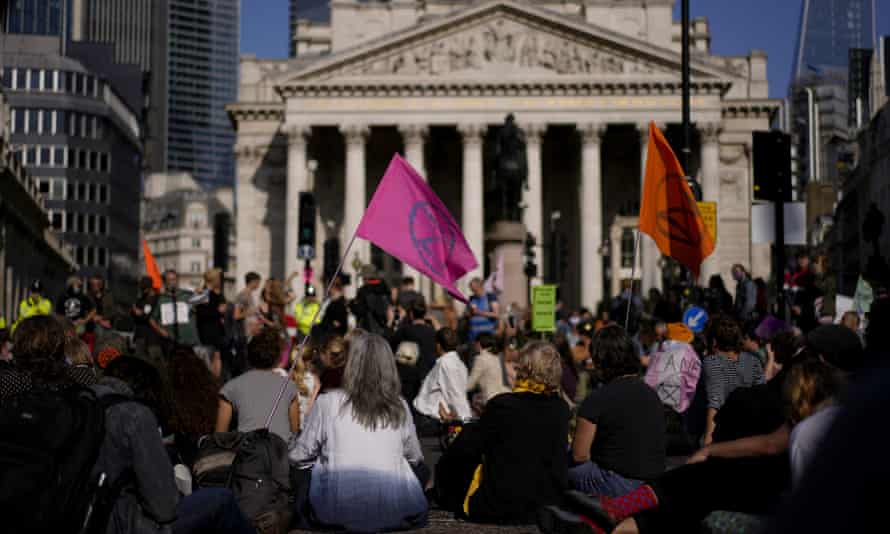 Dozens of Extinction Rebellion activists have carried out a mass act of non-violent civil disobedience by breaking bail conditions ordering them to stay away from the City of London financial district.

The activists joined with hundreds of supporters in a low-key rally outside the Bank of England on Thursday afternoon, listening to speeches from a mobile sound system.

XR said they had targeted the Bank because of its new remit to take environmental sustainability into account in its activities, and that protesters were willing to stay until its governor and the prime minister declared an end to all new fossil fuel funding.

Those breaking bail advertised their civil disobedience with signs bearing messages such as “arrested for sitting in a road”, “arrested for conspiracy to commit climate justice” and “arrested for caring about my grandchildren”.

Among them was Etienne Stott, who won gold in the canoe slalom for Britain in the 2012 London Olympics. He gave a speech publicly telling the crowd he was breaking the law by violating the conditions of his bail.

He told the Guardian: “I’m fed up of being criminalised for acting for the future of all life on Earth in a peaceful, disobedient and responsible way, and it feels quite wrong that I’ve been criminalised for doing what’s so logically and obviously the right thing, given the emergency situation that we are in.

“It seems to me completely sensible that our government stops its fossil fuel investments immediately, and yet I know they have got plans for a new oilfield in Shetland [and] a coalmine that’s in train.

Angie Zelter, 70, the veteran peace campaigner, sat outside the entrance to the Bank, which was guarded by eight Metropolitan police officers. She said she had told them she was not going to move until Andrew Bailey, the governor, came out to meet her.

Zelter, from Powys, Wales, said her bail conditions banning her from the City were unreasonable. “We are peacefully demonstrating for one of the most urgent issues that the globe has ever faced,” she said. “We are totally peaceful and non-violent and we need to be here, and the police should be on our side.”

Asked whether she was worried she would be arrested, Zelter said: “I’ve been arrested over 200 times in many different countries, I don’t think one more time is going to make much of a difference.”

Simon Milner-Edwards, 64, from Manchester, had already been arrested four times during XR protests in the past fortnight, and ordered to leave the M25 area. “I still find it stunning that they are still trying to stop us protesting about this catastrophic climate crisis that the planet and humanity are facing,” he said.

“It seems extraordinarily petty to arrest us for obstructing when we’ve just had a summer of fires and floods and a heat dome, all over the world, because of the climate crisis.”

Also at the protest was Gail Bradbrook, the XR co-founder. She said: “We have no other power than our own personal sacrifice – today people are breaking bail in desperation as nature’s life support systems are breaking down. This is a plea to those with power at the Bank of England to take the actions that are needed to sustain life.”

The City of London police said they were working with colleagues from the Metropolitan police to “minimise disruption”, and that all approaches to Bank junction were closed.

Elsewhere in the City, activists from the HS2 Rebellion group scaled the seven-storey Tower Place West building, which houses the offices of Marsh, the insurance company that covers subcontractors on the multibillion-pound rail project.

The two men locked themselves on to the first and second storeys of the building, with a banner saying: “Marsh Insurance Ditch HS2.” Another two activists who had been hoping to join the protest were foiled by police who stopped and searched them and found superglue, an HS2 Rebellion supporter told the news agency PA Media.

A spokesperson for the protest said: “Essentially, we’re targeting the profiteers, the moneymakers, the facilitators behind these ecocidal infrastructural projects because without insurers protecting subcontractors, they wouldn’t be able to work on this. It’s all of our money which is disappearing into the pockets of people in the City who we don’t usually see or hear from.”

XR has reached the penultimate day of its latest campaign of protest in the capital. As of Wednesday evening, 479 people had been arrested in connection with the protests for a variety of offences, according to the Metropolitan police.