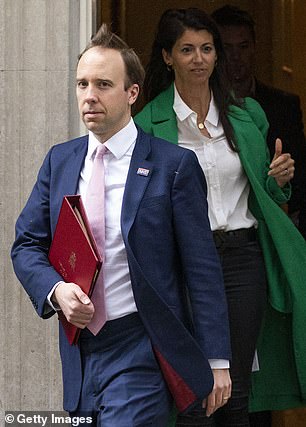 Unfaithful Matt Hancock was humiliated when his passionate clinch with his aide, Gina Coladangelo, was caught on camera in June.

Now the love rat former Health Secretary is taking on another risk.

The MP, who split from his wife and the mother of his children after his affair came to light, will run the London Marathon next month — despite the likelihood of getting heckled by angry spectators.

‘This is my first London Marathon and I’m really excited to raise money for St Nicholas Hospice Care,’ he says. ‘I have already started training.’

On his JustGiving fundraising page, someone by the name of ‘Dominic Cummings’ writes: ‘Hope you’re better at this than you are at sourcing PPE.’ 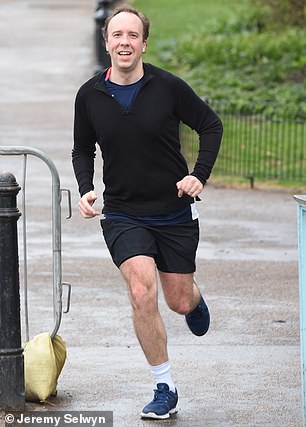 The MP, who split from his wife and the mother of his children after his affair came to light, will run the London Marathon next month — despite the likelihood of getting heckled by angry spectators 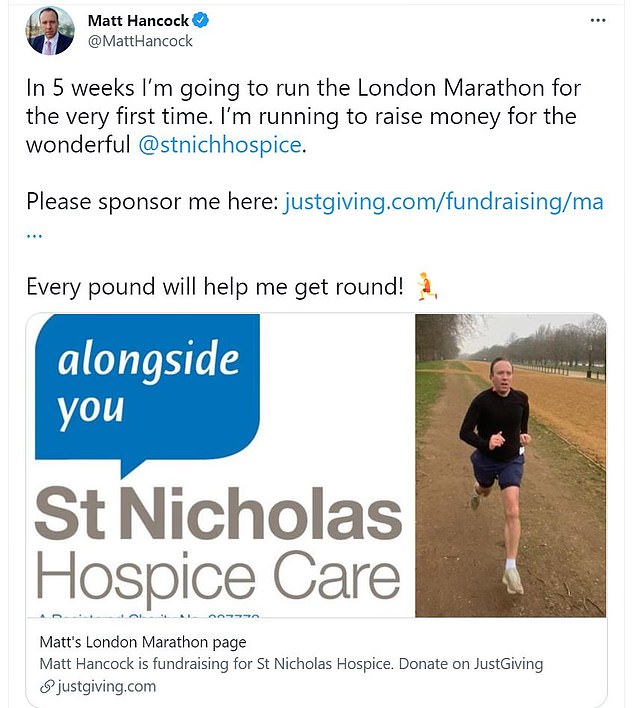 On his JustGiving fundraising page, someone by the name of ‘Dominic Cummings’ writes: ‘Hope you’re better at this than you are at sourcing PPE’

From Fleabag to moneybags! Phoebe earns £11m in a year

Parachuted in to save the new James Bond film by ‘spicing up’ the script, Phoebe Waller-Bridge has now discovered just how much her talent is worth.

I can reveal the star, who shot to fame writing and starring in the BBC quirky comedy Fleabag, has made more than £11 million in the past year — and a staggering £305,498 a week in just eight months.

That’s five times as much as the average Premier League footballer.

The 36-year-old from West London was brought in two years ago to help re-write the screenplay for No Time To Die on the request of its star, Daniel Craig, who believed she would add her famous wit and quirkiness to a script that otherwise lacked humour and panache.

‘They were just looking for tweaks across a few of the characters and a few of the storylines,’ Phoebe said somewhat modestly. She is now one of the four credited writers of the film, which gets its long-awaited release this month. Co-starring Ralph Fiennes and Ben Whishaw, it will be Craig’s fifth and final outing as 007.

Newly published accounts for her company, PMWB Ltd, show that in the space of less than two years, Phoebe has earned a total of £22,040,744.

The actress, who also wrote BBC’s Killing Eve starring Jodie Comer, has paid herself a dividend of £1.4 million, according to Companies House.

Keen to enjoy the fruits of her labour, Phoebe splashed out on a £5.2 million Victorian house in London last year, which has four bathrooms, a gym, a large bar area and a marble kitchen.

After the collapse of her four-year marriage to Irish documentary filmmaker Conor Woodman in 2018, she started dating playwright Martin McDonagh. Success in love may be harder to come by, though, as her relationship with McDonagh, 51, is reportedly taking a back seat while he’s busy working in New York.

Disgraced historian Dr David Starkey, who was stripped of lucrative book deals and top academic positions after his racist remarks last year, is still very much in the wilderness.

In a desperate attempt to crawl back into public life, the acerbic 76-year-old has started writing his autobiography.

‘I’ve always thought about doing my story. I’m well on the way,’ he tells me.

But he’ll be hard-pressed to find anyone brave enough to touch it.

Last summer, he was dropped by his long-standing publisher, HarperCollins, and his literary agency Rogers, Coleridge & White, owing to his incendiary remarks about slavery.

The 24-year-old daughter of the Earl Cawdor and Lady Isabella Stanhope, a former Vogue editor, reveals her agility was put to the test on a shoot this week.

Dressed in a black leotard and oversized hat, the Scottish mannequin also had to slip into black latex leggings attached to perilously high platform shoes.

At least stylist Fran Burns was on hand to ensure she didn’t take a tumble! 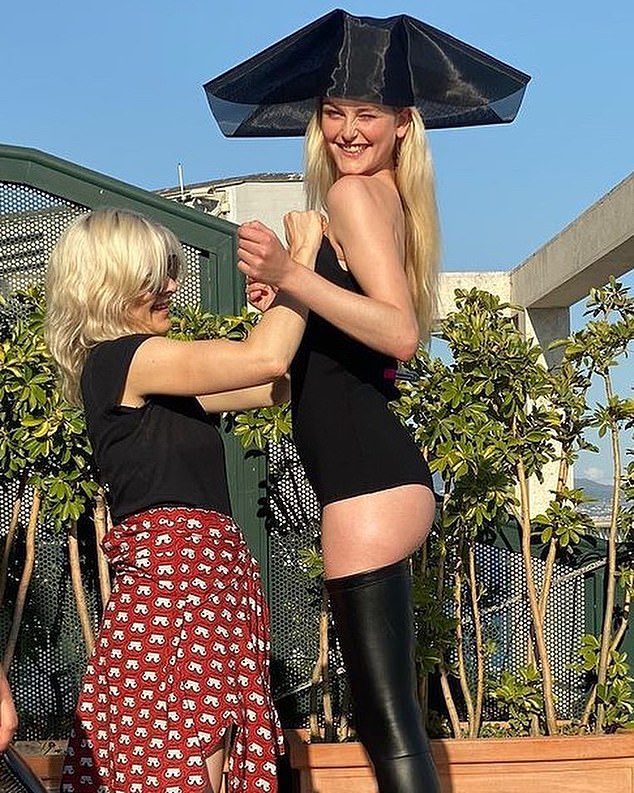 Despite winning a Turner Prize among numerous accolades, Tracey Emin worries she’s not taken seriously enough because of her celebrity status.

‘I always look at actors who have a new film coming out, and you see them everywhere. At first, I’m really interested in them, but by day six, I’ve had enough. I think it’s how the media exposes things,’ says Emin, the enfant terrible of the Young British Artists.

‘I think a lot of artists are taken far more seriously if they are just quiet and don’t have a visual profile.

‘Everyone seems to think that they are much more serious than, say, someone like me.’

Speaking to designer Hugo Huerta Marin for his new book, Portrait Of An Artist, which will be published next week, she adds: ‘But life is for living. You are only here once, and I’m certainly not going to be starving in my attic to have people take me seriously. I’m going to do what I want to do and enjoy my life to the fullest.’

One Show Alex shies away from parties

The One Show host Alex Jones is not the ebullient figure she appears to be on screen.

In fact, the mother-of-three is so shy she can barely leave the house without her insurance broker husband Charlie Thomson.

‘I have no problem speaking in front of lots of people — there’s a detachment there — but red carpet makes me feel sick. My top lip is stuck to my teeth because I just hate it so much.’ 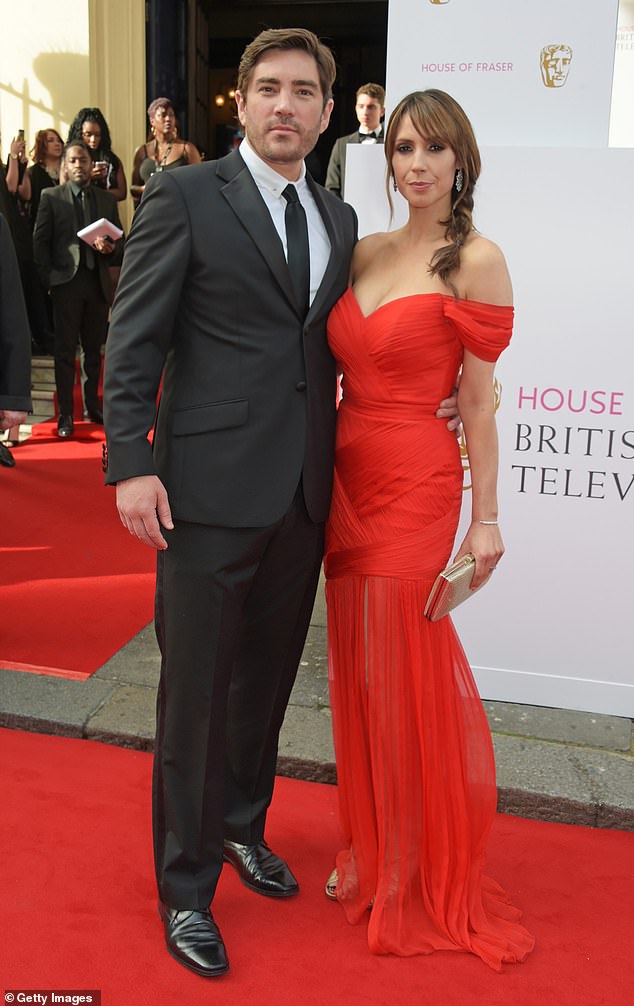 The One Show host Alex Jones is not the ebullient figure she appears to be on screen. In fact, the mother-of-three is so shy she can barely leave the house without her insurance broker husband Charlie Thomson