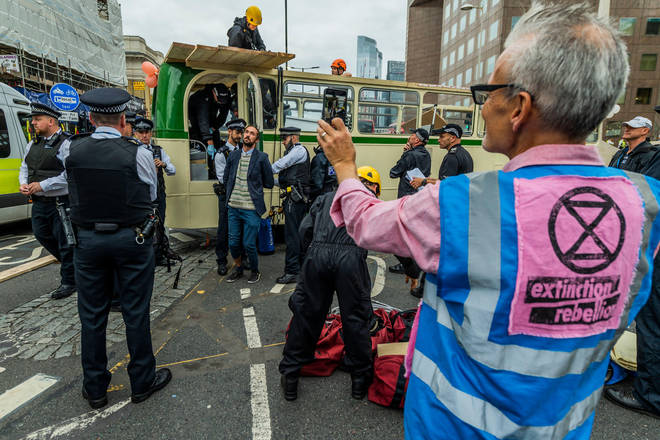 Police officers broke the windows of the bus while protesters attempted to stop them boarding.

Police have faced criticism over their use of batons after Extinction Rebellion blocked off the south end of London Bridge in its second week of protest.

The climate activists blocked part of the junction with a bus draped in the banner saying “invest in life”.

A photo published by the group shows police at the scene, with some people lying on the ground.

Police later ordered them to disperse from 4pm on Tuesday and could be seen trying to clear people from the bus.

A Metropolitan Police Twitter account said: “The Extinction Rebellion Assembly at London Bridge – A3 – Borough High Street junction with Duke Street Hill must finish before and not beyond 16:00 hours on Tuesday 31st August 2021.”

Extinction Rebellion are disrupting various parts of London – targeting landmarks and banks – in their fortnight of protests. Previously, the group shut down London Bridge with a demonstration there.

Video from the scene shows officers from the Met climb the sides of the bus parked across the junction at the south of the bridge, striking and pushing protesters in an attempt to gain access.

At one point officers can be seen breaking the windows of the bus in order to gain access to the vehicle as protesters attempt to push them off.

We are nonviolent. The @metpoliceuk have smashed windows for the second time with no thought for the safety of peaceful protesters in the vehicles. The #RightToProtest is at risk. We must stand together in the face of a gov. who silence protest rather than act on the crisis. pic.twitter.com/KunuGzaCes

The protests last week led to more than 300 arrests as Extinction Rebellion demonstrated across the capital in what they call the “Impossible Rebellion”.

Activists blocked a road in central London with a large pink table, spray painted the exterior of the HM Revenue and Customs building, and daubed the Guildhall in the City of London in red paint.

On Bank Holiday Monday, Tower Bridge was blocked with a van and a caravan, with 11 arrests made at that protest.

Normski’s best photograph: my mum breaking the rules with her passport | Art and design