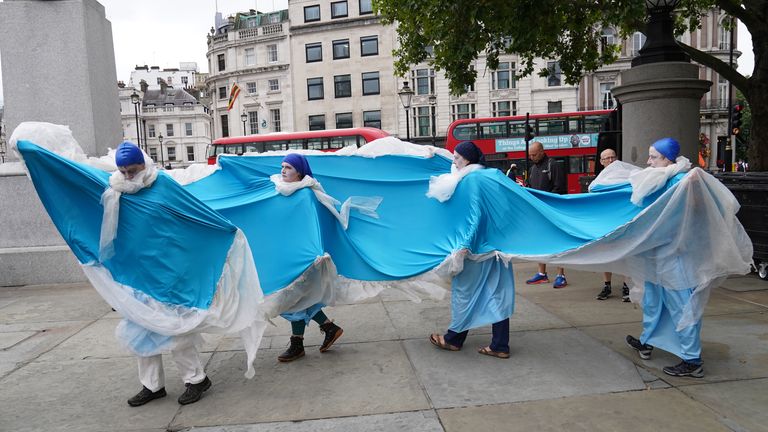 The campaign group expects thousands of people will take part in their “Impossible Rebellion”, which will “target the root cause of the climate and ecological crisis”.

The protests began on Monday morning, with activists gathering at Trafalgar Square, in what is its fifth mass demonstration.

Gail Bradbrook, the group’s co-founder, gave a speech expressing solidarity with nations that are disproportionately affected by climate change.

Image:
Four people were dressed as the sea in a warning over rising ocean levels

Campaigners held placards with messages including “Code red, where’s the action” while four people were dressed as the sea in a warning over rising ocean levels.

The Metropolitan Police said eight people were arrested in the capital on Monday as of 6pm, following 10 arrests on Sunday.

In a tweet, they added: “Our policing operation continues. Specialist teams remain on site at their protest site on Long Acre junction #Westminster.”

We have made eight arrests while policing Extinction Rebellion demonstrations in London today.

Activists have scheduled demonstrations at St James’ Park, and Piccadilly Circus – similar to those carried out in 2019.

More protests are expected to take place in north and south London.

The Metropolitan Police will put in place a “significant” operation to manage the demonstrations over the bank holiday weekend, but acknowledged the activists are tackling an “important cause”. In a statement, Extinction Rebellion said it will “take to the streets again, with plans to disrupt the City of London to target the root cause of the climate and ecological crisis – the political economy”.

The disruption will continue until the government agrees to stop all new fossil fuel investment, it said.

Bring a table, bring a chair, bring your rage, bring your love, bring your hope and despair and get yourself to Trafalgar Square. There’s Rebellion in the air.

Fry praised the group on Twitter for attempting to “make politicians really recalibrate, realign, revolutionise politics” through their “mucky” and “disruptive” demonstrations.

And Flynn, who played Bronn in Game Of Thrones, attended a protest on Sunday at the Guildhall building in central London, where three activists scaled the entrance of the building. 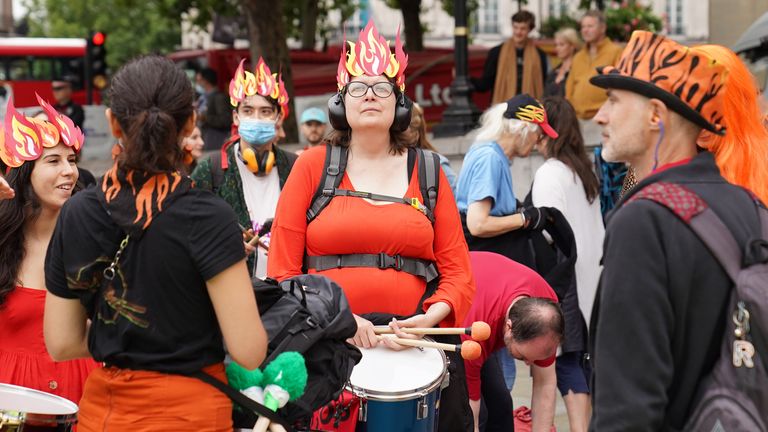 Image:
The disruption will continue until the government agrees to stop all new fossil fuel investment, the group said

Around 200 people were there, as the trio sprayed red spray over the walls of the building and unfurled a banner reading “co-liberation freedom together”.

The Game Of Thrones actors said it was “more urgent than ever” for people to take a stand.

“We’ve got used to certain systems that are life destructive, we created them, we’ve become addicted to them and we know the world is burning as a result,” he said. 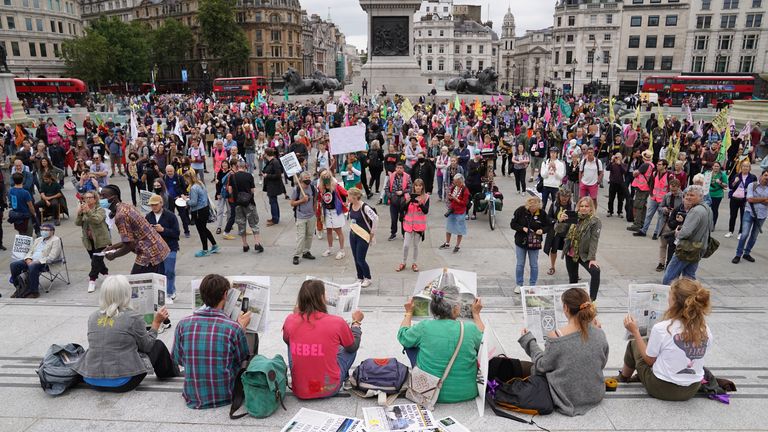 “It feels needed and more poignant and more urgent than ever to come together.

“It’s time to collaborate, there are so many things that are trying to polarise us and pull us apart.” 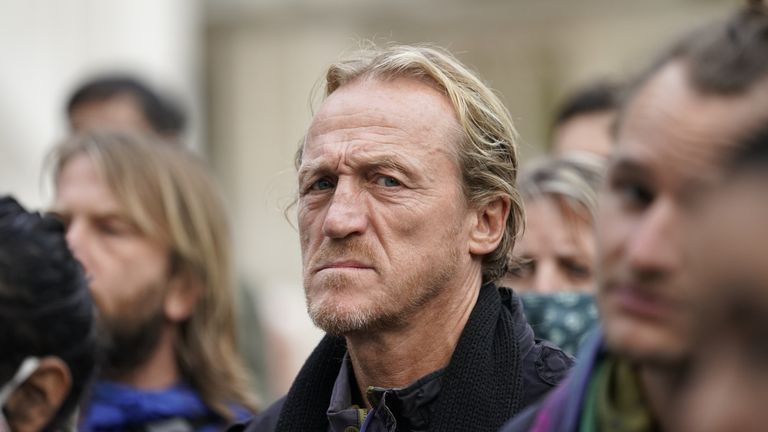 Image:
Actor Jerome Flynn has praised the group and was seen at a protest on Sunday

Another person was detained for going equipped to cause criminal damage. 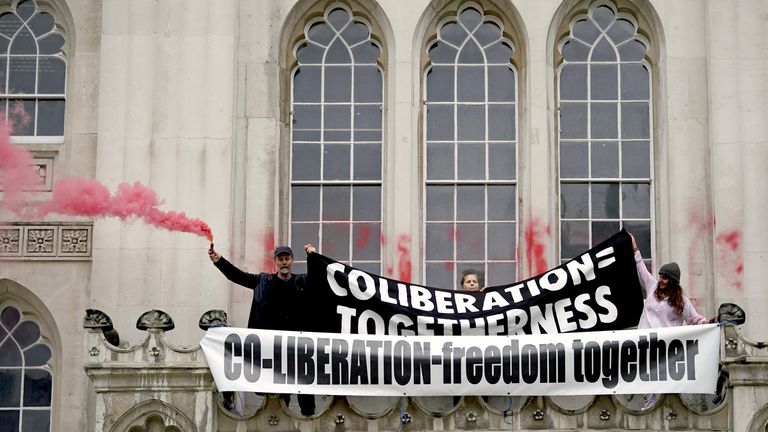 Image:
Around 200 people attended a protest at the Guildhall building in London on Sunday – with police making nine arrests

On the upcoming protests, the Met’s deputy assistant commissioner Matt Twist said: “We’ve got a significant operation in place lead by an experienced command team to effectively provide a proportionate response to what is going to be a protracted demonstration over two weeks.

“We understand why this is such an important cause, no one is oblivious to that, what we don’t want is for people who are protesting to impact on the rights of others.

“We don’t want serious disruption caused to London – the August bank holiday is one of the busiest of the year and we know this will mean officers are extracted from their local boroughs and brought into the centre of London to deal with this protest.”