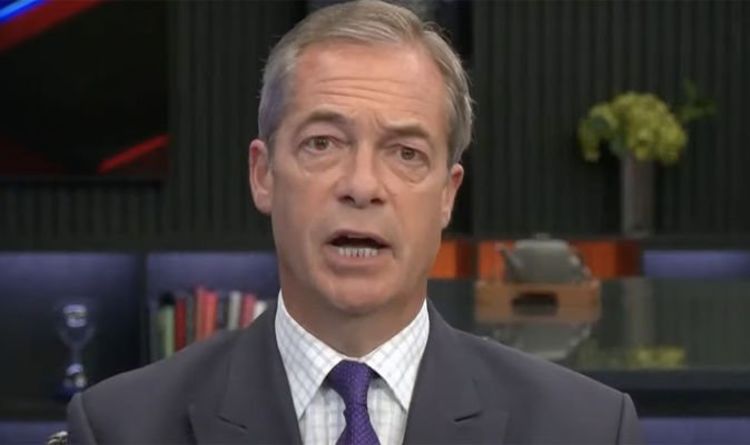 Nigel Farage praised the Archbishop of York for speaking out about the importance of cherishing English identity. During GB News’ Political Correction programme, Mr Farage questioned why Scottish, Welsh and Irish patriotism is fine but English patriotism is seen as almost racist. The former Brexit Party MEP savaged the idea that not all patriotisms are considered equal.

He suggested that these patronising attitudes towards many people in England are behind the most recent political earthquakes such as Brexit.

Mr Farage said: “This week the Archbishop of York said many people in England feel left behind by the metropolitan elite in London and the south-east and are patronised.

“When I read this, I just couldn’t believe it.

“He called for an expansive vision of what it means to be English.”

JUST IN: Nigel Farage warns about ‘the biggest crisis facing the Government’

The new GB news host added: “I think what he said was absolutely right, and it was terrific to see it coming from the Church of England.

“He put his finger on the out-of-touch elite by saying anyone who feels English is seen as backwards and xenophobic.”

Paul Embrey, a Brexiteer left-leaning activist, said it was “quite refreshing” this sentiment came from a senior Anglican clergy member.

He told Mr Farage: “There is a liberal and cultural elite, people who come from these fashionable cities and university towns who are completely contemptuous of small-town Britain, of provincial Britain and post-industrial Britain.

He pointed to the infamous 2014 tweet from Labour MP Emily Thornberry, who was accused of snobbery when she posted a picture of a house decked out in St George’s flags.

Mr Farage claimed that Ms Thornberry’s message was that “the cross of St George was this most awful, terrible thing”.

Mr Embrey agreed: “All these other patriotisms are regarded as benign but any expression of English nationalism is seen as bigoted and reactionary.”

In his article for Daily Telegraph, the Archbishop of York, the Most Reverend Stephen Cottrell, criticised the London “metropolitan elite” for treating people who are proud to be English as “backwardly xenophobic”.

Archbishop Cottrell, the most senior figure in the Church of England, said: “Many English people feel left behind by metropolitan elites in London and the South East, and by devolved governments and strengthened regional identities in Scotland and Wales.

“Their heartfelt cry to be heard is often disregarded, wilfully misunderstood or patronised as being backwardly xenophobic.”