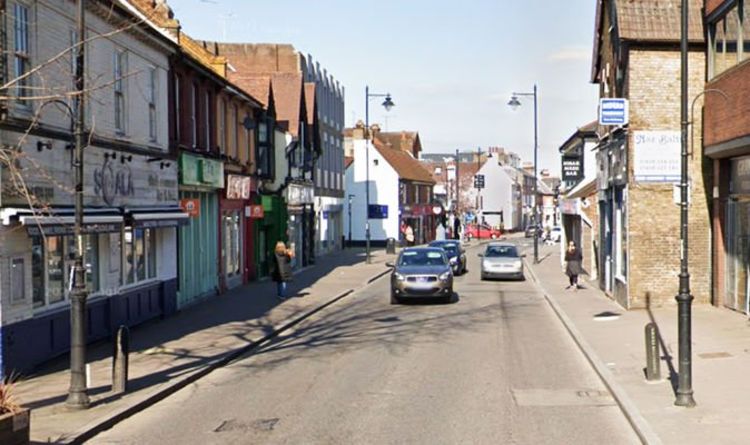 The 23-year-old was attacked alongside a 56-year-old man shortly before 2am in Orpington High Street, the Met Police said. Officers provided first aid at the scene before both casualties were taken to hospital by the London Ambulance Service.

It is not believed that their injuries were critical, police said.

They also confirmed that an 18-year-old man had been arrested at the scene on suspicion of grievous bodily harm, robbery and possession of an offensive weapon.

He remains in police custody.

A spokeswoman for the force said that a crime scene “remains in place” while investigations are carried out.

“What do you do? So sad! Can not go out no more in case you get stabbed.”

Others hoped that the victims were OK and the perpetrator was caught.

One wrote: “Terrible news! Thoughts with the person hope they make a speedy recovery.”

A spokeswoman for the police also appealed for information.

She said: “Anyone with information is asked to call police on 101, providing the reference 679/07AUG.

“Information can also be provided to Crimestoppers, anonymously, by calling 0800 555 111.”

The news emerged as the Met announced that a police dog stabbed while apprehending a suspect in Orpington in June had returned to service.

Kaiser was stabbed up to five times on the top of his head and once below his eye when he tried to subdue a suspect.

The police dog was on patrol with his handler, Pc Mark Woolcott, when they were called to a report of an intruder in the back garden of a house in the town.

At the time Superintendent Emma Richards, from the Met’s Taskforce, which includes the Dog Support Unit, said Kaiser was “lucky to be alive”.

Sharing news of his return to duty yesterday, the Sutton Police Facebook page said: “After being brutally stabbed in June, PD Kaiser and his handler PC Woolcott were welcomed back by our Borough Commander Dave Stringer and The Mayor & Mayoress of Bromley this morning.

“Kaiser was absolutely delighted upon receiving a new toy which was gifted to him by The Mayor for his bravery.”