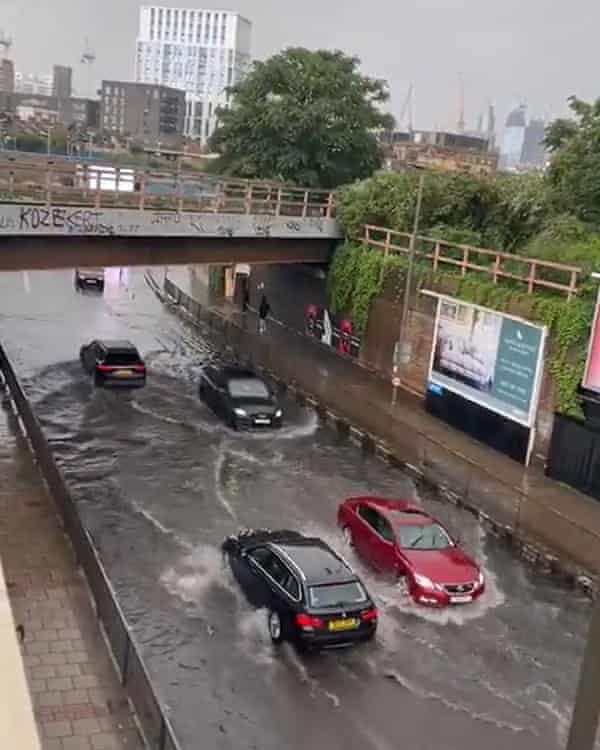 Parts of the UK have faced rain and localised flooding this weekend, but forecasters have said drier and sunnier weather could be possible by the end of the month.

Heavy downpours caused flooding in areas of London on Saturday, and the Met Office warned that torrential rain would continue to affect the south-east of England throughout the day.

There are also warnings of heavy rain, thunderstorms, flooding, lightning strikes, cold winds and hail in central and southern Scotland, northern England and Northern Ireland over the weekend.

Videos and photos of heavy flooding on the roads, and drains full of water, were posted on social media by people in Walthamstow, east London, and Battersea in south London. Two London underground stations – Stepney Green and Holborn – were closed as a result of flooding, as well as a platform at Liverpool Street station.

However, it is likely the weather will clear up for a chance of a drier summer towards the end of August.

The Met Office meteorologist Becky Mitchell said: “It’s going to stay quite changeable, at least for the next week, but as we head towards the end of August, there’s a likelihood we’ll see a hotter spell of weather and drier, more settled weather across the whole of the UK.”

While it is too early to predict temperatures at this stage, she said, it could “potentially be in the high 20s”.

Mitchell said that even though it may not seem like it, this summer has been “warmer and drier than average”.

She explained that the only exception has been the south-east of England, which has been wetter than usual and has already had 111% of its average rainfall for the summer.

The worst-hit places so far are the City of London, which has had 143% of its average rainfall this summer; the Isle of Wight, with 174% of its average summer rainfall; and Surrey with 126%.

By comparison, Scotland has only had 38% of its average rainfall, and Mitchell said: “A few northern areas have been much, much drier.”

The Met Office had issued a yellow thunderstorm warning from 4am until midnight on Saturday, covering Northern Ireland, north Wales, northern England and up into central Scotland.

Forecasters said 20mm to 30mm of rain could fall in some areas over the space of an hour on Saturday, after 40mm to 60mm of rain fell in parts on Friday.