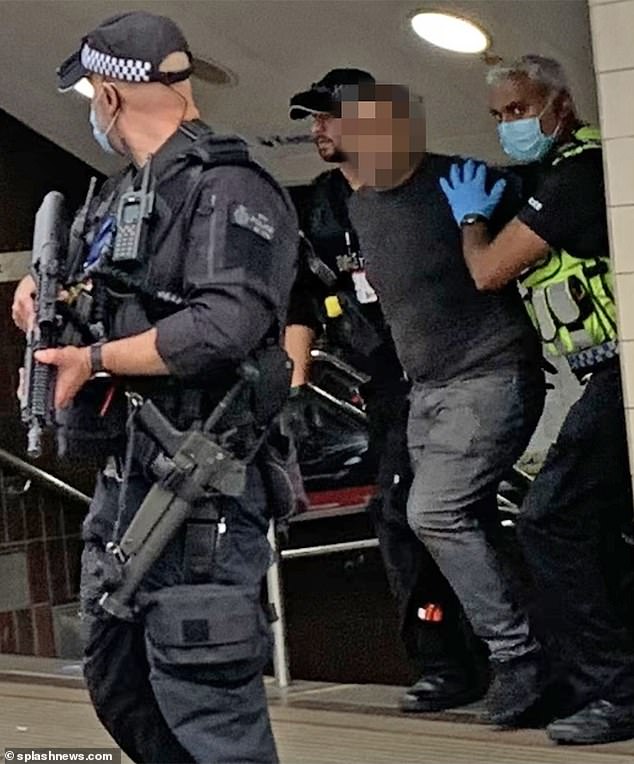 The man who was arrested by police after a horrific machete attack on a Tube last night that left a victim with ‘half his head hanging off’ has been pictured.

British Transport Police were called to Bond Street and Green Park Tube stations in central London last night to reports of a stabbing, and the victim is in a stable condition in hospital.

The suspect was led away in handcuffs from Bond Street station while flanked by armed police officers.

Shocking pictures show a man with a bandaged head and leg being taken to an ambulance in a wheelchair by a paramedic outside the same tube station.

Witnesses broke down in tears and embraced outside the stations after the attack last night.

A passenger in his 30s, who was among those trapped in a carriage with the attacker, said he feared he would be ‘hacked to death underground’. 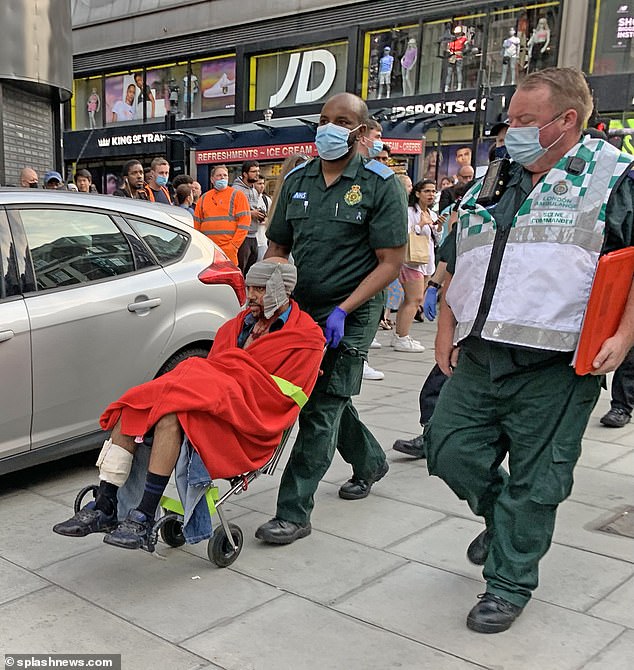 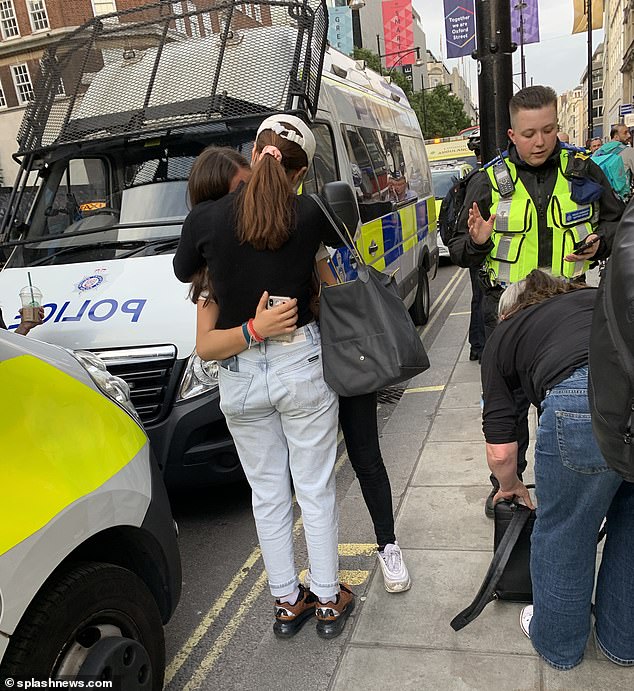 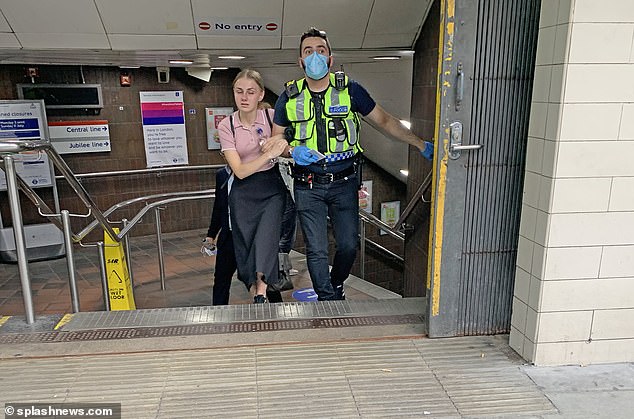 One of the terrified witnesses, who did not want to be named, said: ‘All of a sudden there was a huge commotion.

‘A man stood in the middle of the carriage and brandished a foot-long black machete.

‘People started screaming, there was a stampede to the front carriage — people got trampled on and pushed into the plastic and stuff.’

The witness said he moved into the next carriage away from the attacker, adding that the victim had a wound on his head which he described as ‘a deep gash meaning the side of his head was hanging off’.

He added that the driver was unaware of anything happening for 10 minutes because the intercom was not working, and passengers were left defenceless on the moving Tube as the attacker ‘taunted’ them.

‘The attacker went back down the train. We heard screaming but we don’t know what happened,’ he said. 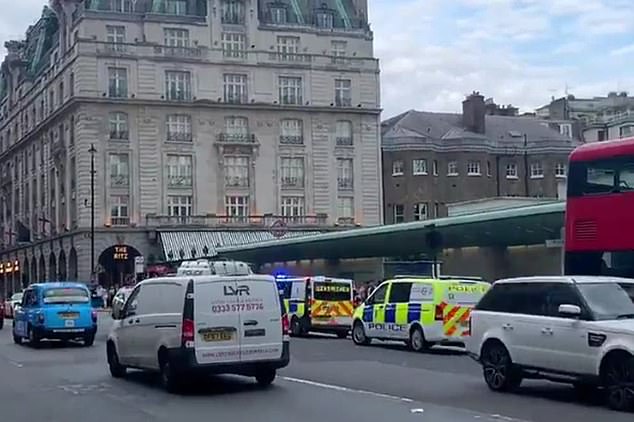 Officers were called to the tube station at 6.47pm amid reports a person had been stabbed on-board a Jubilee Line service train 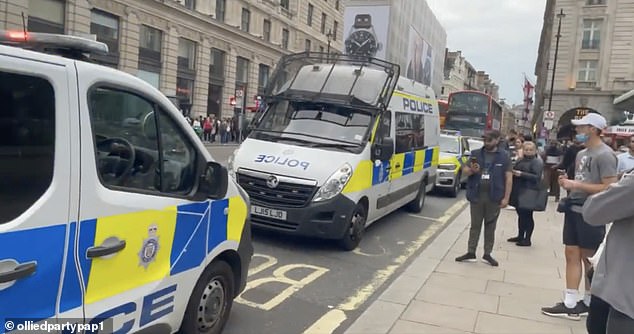 The victim was rushed to hospital and a weapon was retrieved, British Transport Police said. Pictured: Heavy police presence at Green Park 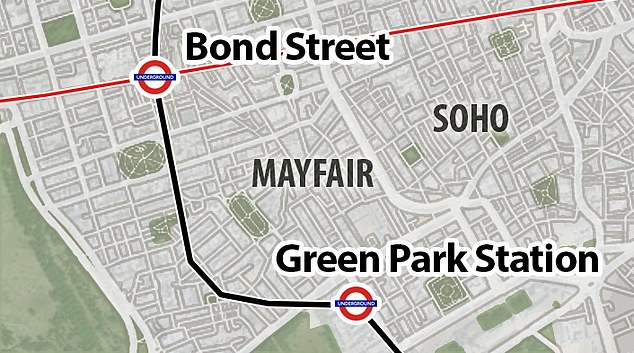 British Transport Police said they were called to both Bond Street and Green Park tube stations in central London on Friday night to reports of a stabbing, and the victim is in a stable condition in hospital

‘It was completely and utterly terrifying. For about 10 minutes I genuinely thought I would be hacked to death underground.

‘However, people showed compassion and care to each other – people held other’s hands, and a teenage boy saved his mum from being trampled.’

The witness said the Tube train eventually stopped and armed police arrested the attacker, who did not resist them. 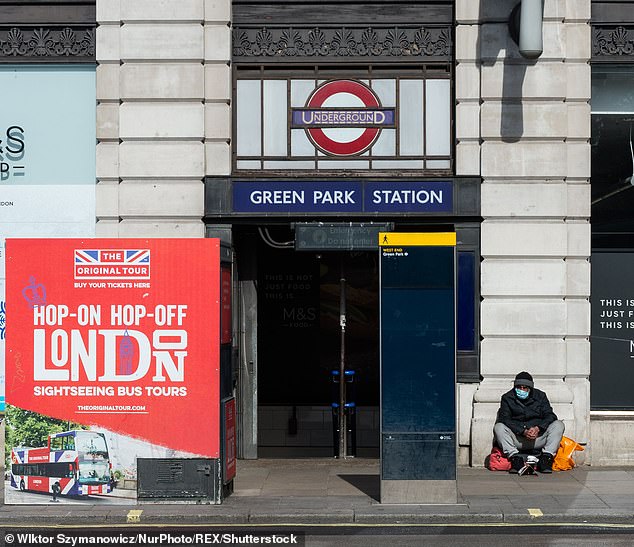 BTP told Mail Online that the stabbing took place on the Jubilee Line between Green Park and Bond street stations.

Officers were deployed to both stations and managed to meet the train at Bond Street station, where they arrested the man on suspicion of grievous bodily harm.

Paramedics also attended the scene and took the victim to a nearby hospital.

Video footage emerged showing a man being held by a police officer and another person in plain clothes while the man is handcuffed inside the station. A man was arrested on suspicion of grievous bodily harm, police said.

The tube station, which is less than a mile away from Buckingham Palace, was evacuated by police, according to witnesses. 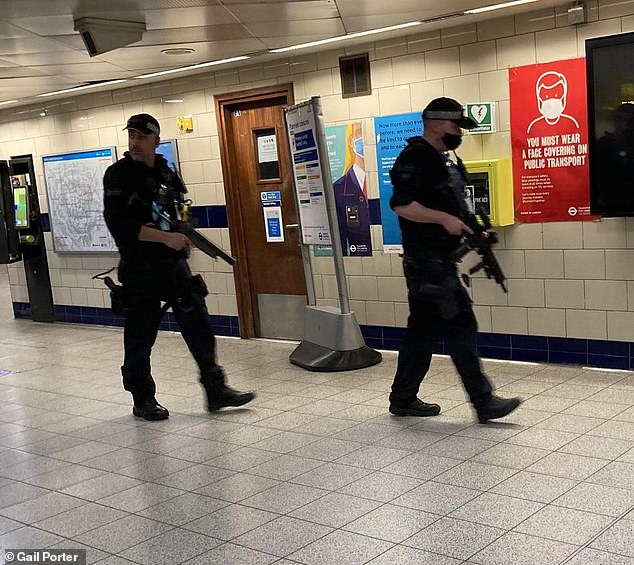 Superintendent for Operations and Crime in London and the South East Mark Lawrie tweeted: ‘Due to an incident at Green Park the station was closed but will be reopened imminently.

‘Victim being cared for at hospital. No officers injured, weapon recovered.’

A spokesperson for the BTP told MailOnline:  ‘British Transport Police were called to Green Park Underground station at 6.47pm on July 9 following reports of a stabbing on-board a Jubilee Line service.

‘Specialist armed response units were deployed, and a man was arrested on suspicion of grievous bodily harm and conveyed to police custody.

‘Paramedics also attended, and a man has been taken to a local hospital. He is currently in a stable condition.’

Manchester is England’s top city outside of London to start a business, major report reveals