Lewis Hughes was charged after footage of Prof Whitty being accosted in a park went viral (Picture: PA)

An ‘yobbish’ estate agent ‘humiliated’ Professor Chris Whitty when he put him in headlock during an altercation in a park, a court has heard.

Lewis Hughes, 24, has been given a suspended sentence after he pleaded guilty to assaulting England’s Chief Medical Officer during ‘ten seconds of madness’ in central London last month.

Hughes, 24, and Jonathan Chew, 24, were both charged after 20 second footage showing Prof Whitty being accosted in a St James’ Park went viral.

Both men appeared at Westminster Magistrates Court on Friday, with Chew denying the charges against him.

Hughes, from Romford, east London, admitted assault by beating and was handed an eight-week prison sentence, suspended for two years. He was also ordered to pay £100 in compensation to Prof Whitty.

Wearing a dark pinstripe suit, Hughes, who lost his job after the incident, smiled at photographers as he made his way into court.

Senior district judge Paul Goldspring told him he had put his future at risk, adding: ‘He (Prof Whitty) goes about his very difficult job without the expectation of yobs like you accosting him, assaulting him.

‘And to compound it all, he was further humiliated by that video being posted.’ 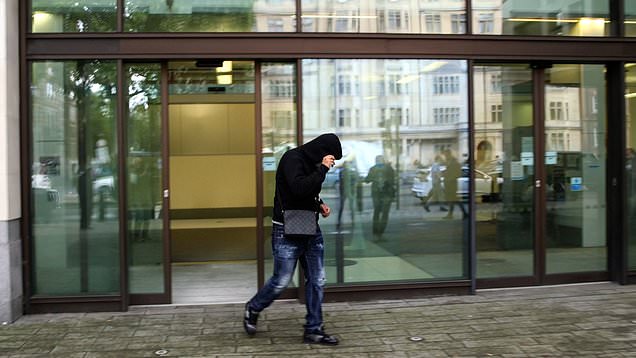 Prosecutor Luke Staton said Prof Whitty had just left his office and was heading to a meeting with the Prime Minister at Downing Street when he was approached at around 7.20pm on June 27.

Mr Staton said: ‘One of the men then said to him “can we have a photo”. He politely declined – his routine answer to this question is always no. 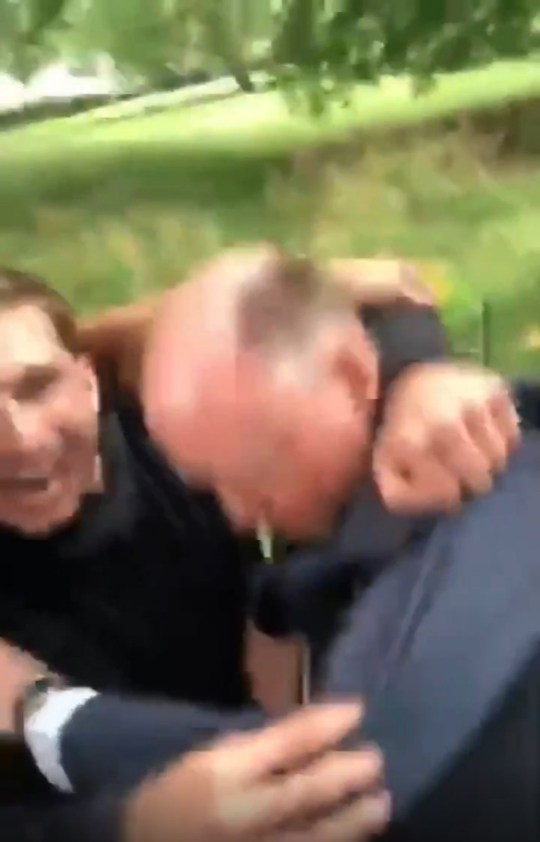 Chris Whitty declined to have a photo with the men (Picture: PA) 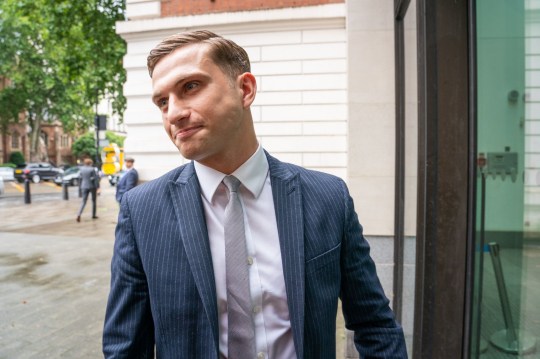 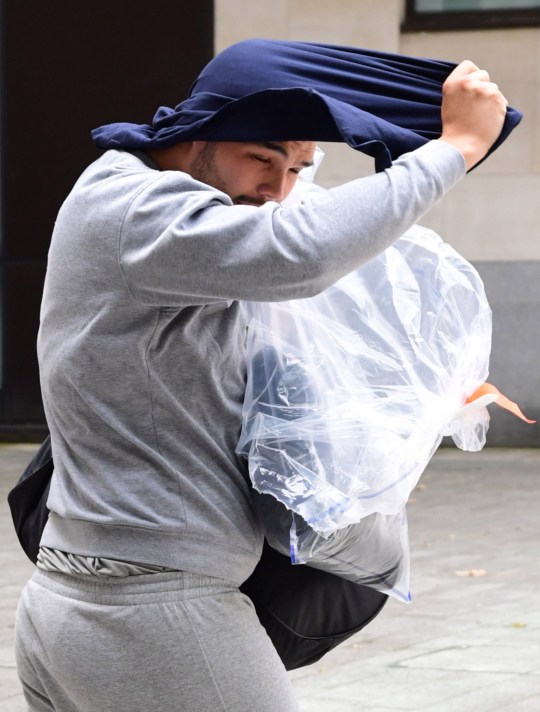 ‘Professor Whitty was trying to break free from both of the men who were grabbing him.

‘He saw that there were police officers nearby.

‘He managed to break free and moved towards the officers at which point officers then approached Mr Chew and Mr Hughes to stop and engage with them.’ 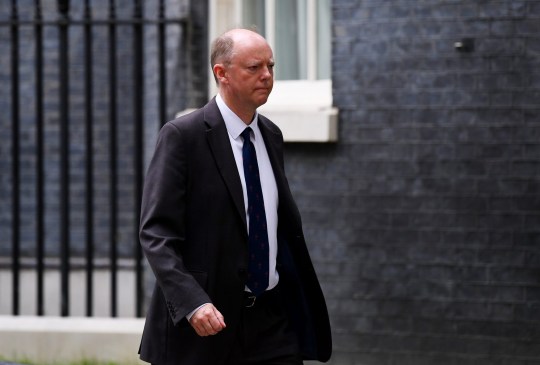 The court heard Prof Whitty was heading in the direction of Downing Street (Picture: James Veysey/Shutterstock) 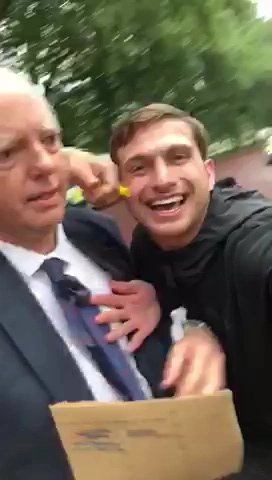 The prosecutor added: ‘At the time Professor Whitty was not willing to make a complaint.

‘But once it had been posted online Professor Whitty at that stage decided he would make a complaint and pursue the matter.

‘He said normalising this kind of behaviour to medical staff and civil servants is not acceptable.’

The court heard Hughes later told police in his interview that he had not deliberately targeted the professor, but had recognised him from television.

Mr Staton said: ‘He told officers he simply said he did what he would do if he saw Justin Bieber in the park.’

Police officers spoke to Prof Whitty, who did not suffer any injuries, and checked his welfare.

The footage of the incident sparked outrage, with Prime Minister Boris Johnson labelling the men as ‘despicable thugs’. 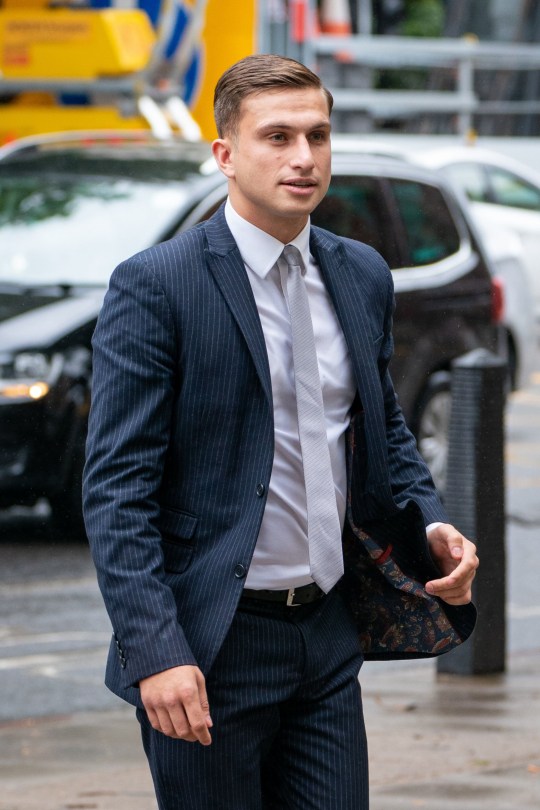 The court heard Hughes told police he ‘simply said he did what he would do if he saw Justin Bieber in the park’ (Picture: PA)

Hughes was sacked from his job with Caplen Estates Agents after his boss saw the footage and later issued an apology for his actions, telling the Sun: ‘If I made him feel uncomfortable, which it does look like I did, then I am sorry to him for that.

‘He is quite a timid, shy person and I think that is why he didn’t say, “Get off me”. If he had said that and I had realised how he felt, I wouldn’t have put my arm round him.’

Defending, Laurie-Anne Power told the court Hughes ‘accepts that Mr Whitty didn’t give consent to be touched in the way that is seen on video’

She said: ‘Ten seconds of complete madness has cost this young and ambitious defendant a very bright future.

‘He is unreservedly unapologetic about the distress he caused to Professor Whitty.

‘He has brought shame on his family and upon himself. He offers sincere and genuine remorse to both the court and to Professor Whitty.’ 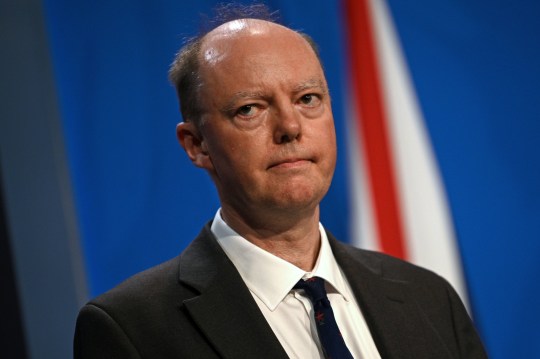 An investigation was launched after Prof Whitty was approached in St James’ Park (Picture: PA)

‘Some people choose to do that, politicians perhaps. Professor Whitty, who has worked hard to get that title, did not choose to become front and centre in a world pandemic.

‘In the last 18 months, he has been on television – if not daily, weekly.

‘He has led – whether you agree or disagree with the science – the battle against the disease that has claimed thousands of lives with great professionalism.’

Mr Goldspring went on to say: ‘The act itself is not the most serious but there are very few cases that are more serious in my view.’

The judge said he believed Prof Whitty would donate the £100 compensation awarded to him to charity, saying it would be the ‘mark of the man’.

He told Hughes: ‘Let it be a lesson to you, yobbish behaviour and drinking alcohol has consequences.’

Kalsoom Shah, from the CPS, said: ‘This was a completely unacceptable act of targeting and assaulting Professor Chris Whitty.

‘Lewis Hughes showed little regard for him or relevant social distancing rules when he accosted the Government’s Chief Medical Officer in the street. His behaviour was both shocking and disgraceful.

‘Like everyone else, public figures should be free to go about their day to day work without fear of being targeted and assaulted. The CPS will always work with the police to bring to justice those who break the law in this way.’

During the same hearing, Chew, of no fixed address, denied the same charge, as well as an additional offence of wilfully obstructing police constable Steven Ozden on the same day.

Chew, who wore a navy hoodie in court, was granted bail and was asked to appear at the same court on November 23 for a trial. Prof Whitty is expected to be called as a witness.

London Underground: Londoner sparks fiery debate about Tube etiquette but not everyone agrees