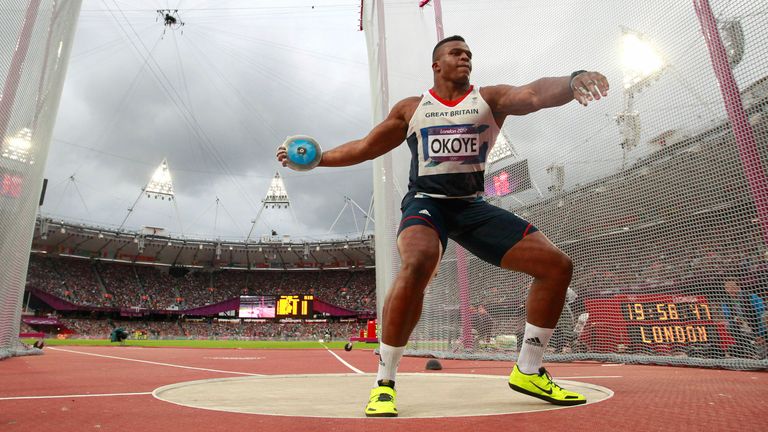 Lawrence Okoye could have been one of Britain’s biggest stars of the London 2012 Olympics.

The athlete was just 20 years old when he competed in the final of the men’s discus, on the same day that Sir Chris Hoy, Laura Trott and Alistair Brownlee won golds for Team GB.

But Okoye – who had only taken up the sport in 2010 – came out at London’s Olympic Stadium “as tight as a drum”, according to his veteran coach.

“He tightened up, he admits it,” John Hillier tells Sky News. “He attacked it like a maniac.

“He came across to me and I said: ‘Just relax mate, just relax’. When you’re up to your a*** in alligators, you forget the reason you’re there is to drain the swamp.

“That was really sad because on that day, he was physically good enough to win a medal in London – and he knows it.”

Okoye finished 12th in the final and the disappointing result took its toll on the athlete from Croydon, south London.

“It really did hurt him,” says Mr Hillier.

“He’d not done what he’d wanted to do. It knocked him back.”

Now, Okoye is hoping to avenge his disappointment from London 2012 as he prepares to compete at the Tokyo Olympics on Friday. Image:
Okoye in action during the 2021 British Athletics Championship

And the 29-year-old British record-holder admits he’s had an “interesting journey” to this summer’s Games after nine years away from Team GB.

Before trying discus, Okoye was considered a potential rugby union star, playing at the academies of London Irish and Wasps and alongside future England players Elliot Daly and Marland Yarde in a school team that saw him likened to New Zealand great Jonah Lomu.

He scored a try in an under-18s final at Twickenham with “about four people on his back,” says Chris Wilkins, his rugby coach at the private school Whitgift in Croydon.

Okoye, who had a scholarship to attend the school due to his academic ability, would later defer a place he was offered at Oxford University to study law, according to Mr Hillier.

After the 2012 Olympics, Okoye ditched discus and decided to try to forge a career in a completely different sport – American football.

But despite spells at several high-profile teams in the US over four-and-a-half-years, he never played a competitive game during his time in the NFL.

Mr Hillier, who was known Okoye since he was a teenager, says the athlete was “seduced” by the “razzmatazz” of the American sport. 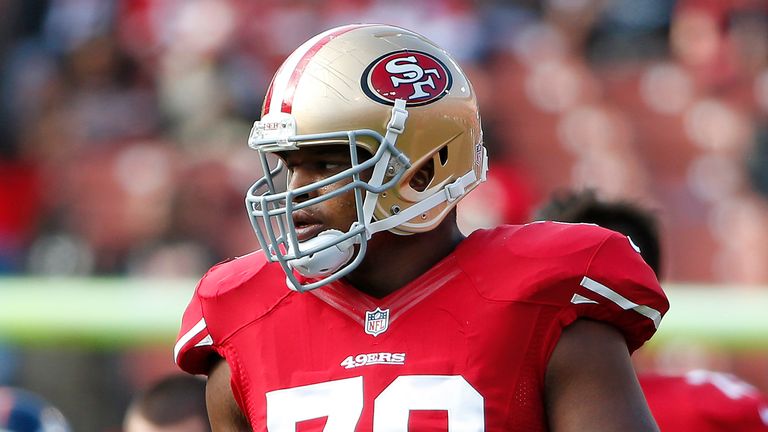 “He was living with his mum… in a two-up, two-down council house in Croydon,” the 76-year-old coach says.

“Suddenly the San Francisco 49ers are offering him the earth.

“It seduced him. The dollar does.”

Okoye, who is 6ft 6in tall and weighs more than 20 stone, was signed by the 49ers in 2013 despite the fact he’d never previously played American football.

The team’s then-head coach Jim Harbaugh was gushing with praise for the British athlete, saying: “He’s just an Adonis. Just a great physical specimen of a man. Our creator created a beautiful man.”

Cam Inman, a US newspaper journalist who cover the 49ers, says Okoye’s lack of experience was “evident from the jump”. 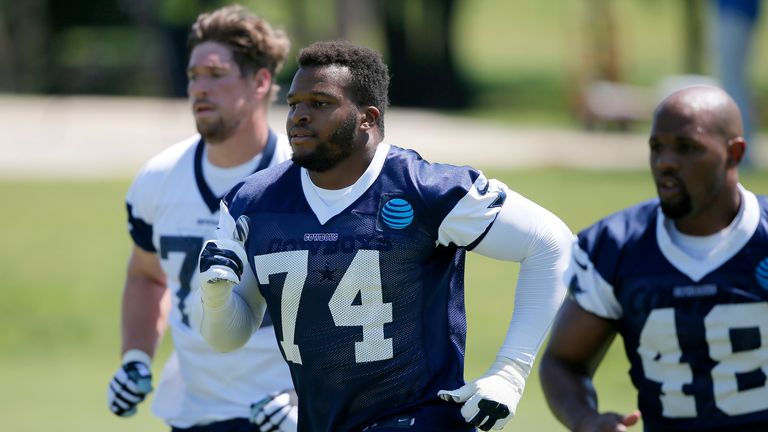 “That 6ft 6 body was not exactly limber when he needed to get low and stay low for leverage purposes as a defensive lineman,” he tells Sky News.

“He wanted to excel with the odds against him.”

Okoye left the 49ers in 2015 and joined the Arizona Cardinals but his time there was short-lived after a parking row with head coach Bruce Arians.

The coach said one of the major reasons Okoye was released was that the player had parked in his parking spot, according to Sky Sports’ NFL presenter Neil Reynolds. 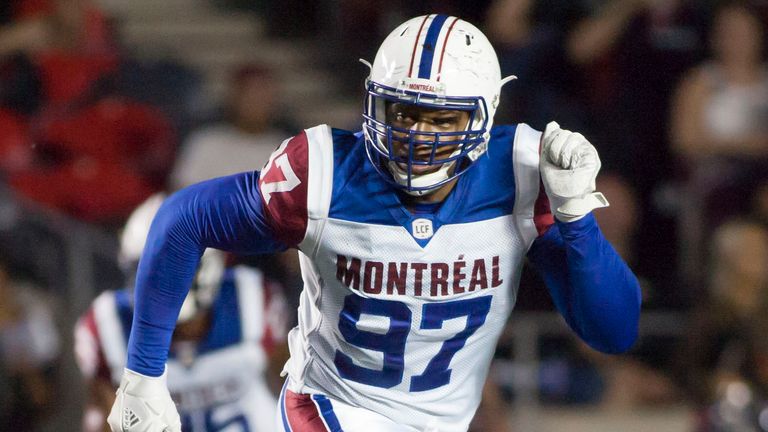 Image:
Okoye playing for the Montreal Alouettes in 2018. Pic: AP

“That may seem petty but Arians felt it spoke to Okoye’s character,” Reynolds tells Sky News.

“I have been in many NFL car parks and it is clearly signed when it comes to the bay reserved for the head coach.

“There was no excuse for Lawrence to park in Arians’ spot. That may seem like a trivial thing but it certainly became a factor.”

After leaving the Cardinals, Okoye had spells with the New York Jets, Dallas Cowboys, Chicago Bears and Miami Dolphins but failed to break into any of their first teams.

Mr Hillier says he would regularly text Okoye during his time in the NFL asking him: “Why aren’t you throwing (the discus)?'”

“It saddened me that he given up the opportunity to win a medal, if not the medal, in Rio,” he adds. 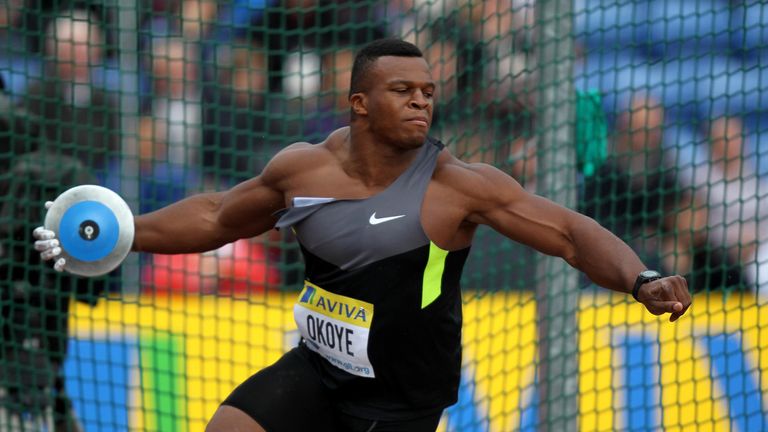 Image:
Okoye’s discus coach wanted him to return to the sport while he was in the NFL

“(American football) is a very complicated game. It’s almost like soccer. You start playing soccer when you’re 20 or 21, you’re not going to make it.

“To start to learn the intricacies of a sport like that… it’s almost impossible.”

• Returning to discus – and being a potential world-record breaker

Okoye decided to return to compete in discus in 2019 and was adamant that he wanted Hillier, who is 47 years his senior, and his former training partner and roommate Zane Duquemin to coach him.

But the coronavirus pandemic brought challenges in getting Okoye ready for the Tokyo Games.

Hillier, who fell seriously ill with COVID in December but has since recovered, says he had to coach the athlete remotely on FaceTime during the UK’s lockdown. 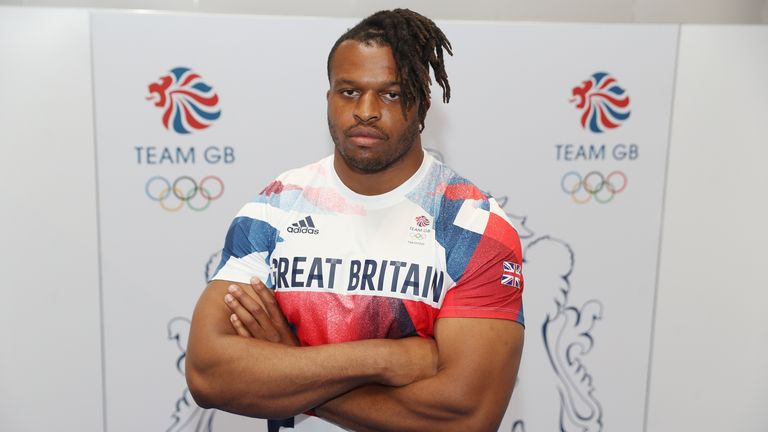 Image:
Okoye is representing Britain in the discus at the Tokyo Olympics

“He used to prop his phone up on a chair so I could watch him,” the coach says.

“He’s in fantastic physical shape. He’s in better shape than he was in 2012.”

“I know if he does the right thing and we get the technique right, he could possibly break the world record,” he says.

“I believe the Olympics has come a little bit early for him but I believe he’ll go out there with all guns blazing and if he catches one, it’s going to go a long way.”

But Mr Hillier is also hopeful that Okoye takes up his place to study law at Oxford in the not-to-distant future.

“An Olympic athlete with a degree from Oxford – wow, the world’s his oyster isn’t it?

The men’s Olympic discus qualifying round takes place on Friday, with the final on Saturday.