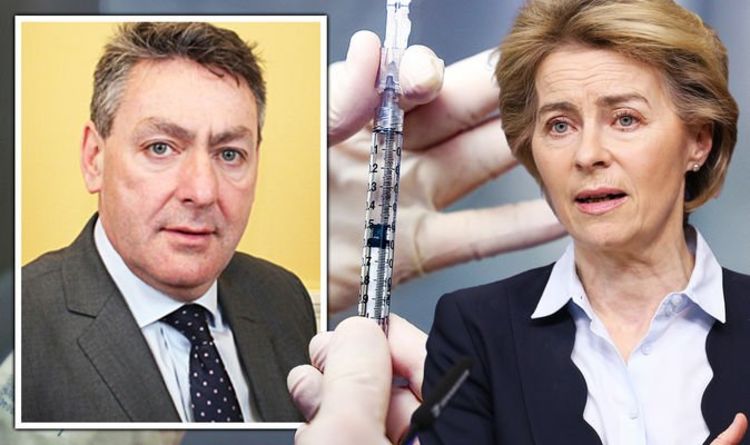 The European Commission is in a celebratory mood as it announces 70 percent of adults have had at least one jab. President Ursula von der Leyen said: “The EU has kept its word and delivered. Our target was to protect 70 percent of adults in the European Union with at least one vaccination in July. Today we have achieved this target. The proportion of people aged 18 and over having been fully inoculated in the bloc now stands at 57 percent.

Ms Von der Leyen urged Europe to be cautious however given the looming threat of the Delta Variant.

She added: “These figures put Europe among the world leaders. The catch-up process has been very successful — but we need to keep up the effort…the Delta variant is very dangerous.”

Currently, 60 percent of American adults have been fully vaccinated with 69 percent having been administered at least one dose. In the UK, these figures stand at 70.5 percent and 88.1 percent.

Irish MEP Billy Kelleher tells Express.co.uk that despite a rocky start, the EU’s vaccination programme is “surpassing the UK’s”.

He said: “There’s an acknowledgement that the EU, despite the difficulties with the vaccine at the start, has done incredibly well.

“It is now surpassing the UK, the US and many others. The EU is the only large entity in the world actually sharing vaccines with other countries. It is doing what it can with the capacity that it has.

“This has seen in Ireland, I think we are in the top two percent in the world in terms of vaccine performance per head of population.

“That is the result of a centralised purchase system and the fact we could move vaccines from countries that weren’t using them effectively elsewhere.”

Brussels and London haven’t always seen eye to eye on the vaccine rollout, with the two falling out earlier this year.

This even resulted in the Commission launching two legal assaults on AstraZeneca for the shortages in vaccine delivery.

Shortly after Express.co.uk’s interview with Mr Kelleher, the UK announced it will give Kenya 817,000 doses of the Oxford-AstraZeneca coronavirus vaccine.

Ministers said the offer would help the nation – which has a population of around 52 million – to combat the COVID pandemic, with the first 400,000 doses due to be sent this week.

There have been growing concerns that supply shortages in some African countries have held back the continuing rollout of their vaccination programmes.

Back in Europe, the threat of the Delta Variant is causing concern.

European affairs expert at the London School of Economics, Kevin Featherstone, told Express.co.uk last week that figures in Europe are ready to blame the UK if the recovery in the EU is affected.

He said: He said: “In the EU, they don’t have the same vaccination rate as the UK, they are concerned about the Delta variant increasing rapidly in the UK, and they think Boris is a bit of a chancer.

“They think that he might become unstuck. In the UK, we feel at some stage you have to balance these interests and make a call for what is the best compromise.”

Mr Featherstone, an academic at the London School of Economics, believes UK tourists could be blocked from entering some European countries.

He also added Brussels may fume at Prime Minister Johnson for “stupid risk-taking.”

He continued: “Either it works in the UK and this third wave is managed ‒ the darker scenario, is that it doesn’t work, we have over 100,000 infections a day and the NHS doesn’t cope, and from the European point of view the problem will be what to do with British tourists.

“Mediterranean states depend on our tourism, so we could then see pressure from Paris and Berlin together to say ‘stop travellers from Britain’ whatever those in Madrid or Rome say.

“So we could easily have a political flare-up in August on the basis that the UK’s strategy of easing up hasn’t worked, and there’s a sense that British travellers must be stopped.

“We are going to see political conflict within the EU, but also between the EU and London. ‘What the hell have you been doing? That’s the stupidest risk taking’.”