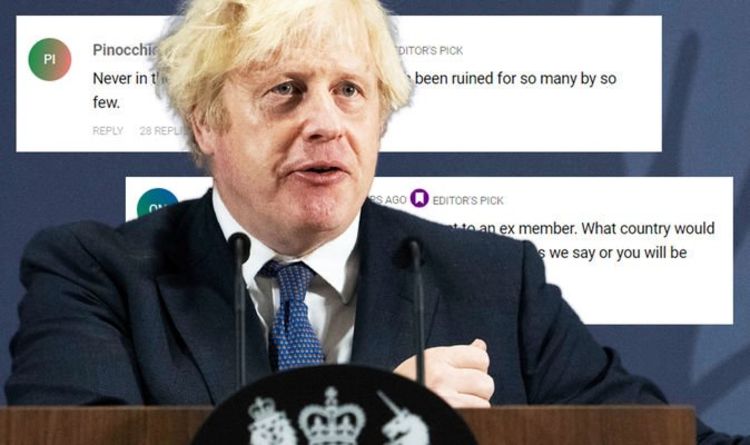 The UK left the Lugano Convention – an international treaty negotiated by the bloc which attempts to clarify which national courts have jurisdiction in disputes – because of Brexit. Boris Johnson then reapplied to join last April, but it has since emerged that the European Commission has recommended the EU deny the request, stating the bloc is “not in a position” to give its consent to UK accession.

News of Brussels’ petulant actions were instantly slammed by many Express.co.uk readers – angry at the perceived attempt to punish the country for leaving.

One raged: “Never in the field of British politics has so much been ruined for so many by so few.”

Another wrote: “Every day a new vindictive punishment to an ex member.

“What country would ever in their right minds want to join the EU? ‘Do as we say or you will be punished!’ What a bunch they are…”

But there are now growing fears that failure to rejoin the international treaty and the continued diminishing relations between the UK and EU following Brexit could make a major dent in this crucial sector.

Former Attorney General Dominic Grieve said his concern is the long-term “viability of London as a centre for dispute resolution.”

He added the longer this continues, “the more potentially damaging it may become because there’s no doubt that the UK when it was in the EU, was seen as the place of dispute resolution of choice for EU litigation of every conceivable kind.”

Mr Johnson will also be concerned by the fact that with the UK outside of the convention, EU nations can directly compete with London for business in the sector.

Former Spanish judge Josep Galvez said: “The alternatives are slowly becoming clear for international companies that want to operate in the EU and don’t want any blockages.

“This Lugano limbo the UK finds itself in is the worst situation possible as lawyers on both sides have no clarity on what will happen in the long term.

“I think the EU wants to make the UK suffer and give EU jurisdictions the opportunity to take business from England.”