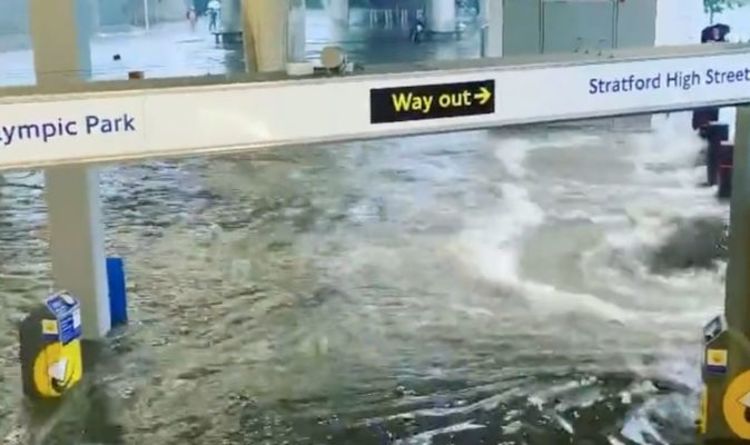 The East London station appeared to be under at least a foot of water with a strong current. Torrential rain has lashed down on the capital, causing havoc for motorists and commuters.

Cars were pictured abandoned underneath a bridge in Worcester Park, submerged in deep water.

London’s Fire Brigade service said that they received more than 300 calls before 4.30pm, while the police were forced to remind people that their cars “aren’t submarines”.

Part of the M11 was shut for a while on Sunday when it started to overflow with rainfall.

A month’s worth of rain battered down in London in just three hours, causing chaos to erupt in the city.

“Torrential showers and #thunderstorms will continue to affect parts of southeast England for the next few hours,” the Met Office tweeted.

“There are already reports of localised flooding.”

“Take care and allow extra time if you have to travel.”

“Our Emergency Department has flooded in some areas. We’re still here if you need us but to help us while we fix things please attend a neighbouring hospital if possible,” Newham Hospital tweeted.