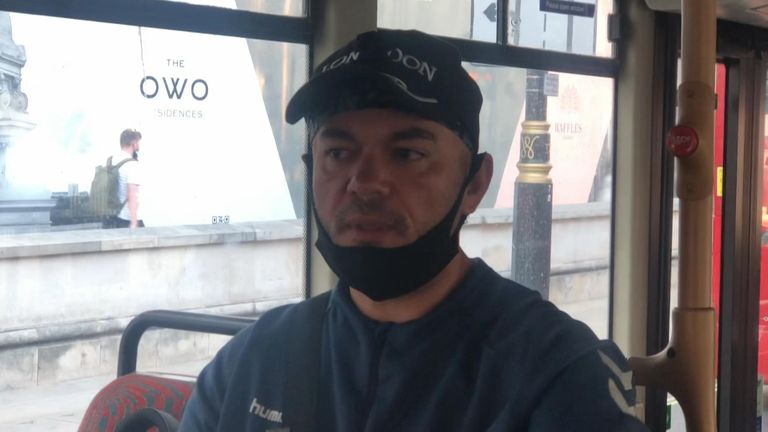 Florian Hasalla wakes up at 6:45am – the first in a line of sleeping bags alongside a building near to the Savoy Hotel in London.

He packs up the cardboard box he’s been using as a mattress – hides his sleeping bag in a wheelie bin and goes to Charing Cross station to use the bathroom to make himself respectable for work.

By 8am he is on a construction site next to Buckingham Palace where he lugs rubble down scaffolding; a homeless man helping renovate some of London’s most expensive properties.

With the numbers of rough sleepers expected to rise following the pandemic, charities say Florian is part of a sub-sector of our economy that is set to grow – the working homeless – the cardboard economy.

“I wouldn’t wish it on anybody,” says Florian. “It is hard. Because you’re battling. You’re battling with the wind, and early morning it’s so cold that this sleeping bag cannot save you.

“And if it’s raining, the rain could come any time. Drunk people at night time, bad people could come and kick you.”

No one at Florian’s building site knows his situation.

He said: “The lockdown came and then everything got cancelled and from there I ended homeless because I wasn’t getting enough money.

“I messed up the rent. And to be very honest I started a bit of drinking, which I’m not really a drinker but because I was staying home a lot, depression started and everything and I lost the place and I came to London for a fresh start and, even with the work now, I can’t get a fresh start.”

The latest figures show that around 75,000, or a quarter of households in England who are either homeless or at risk of becoming homeless are also managing to work.

Rough sleepers, people in tents or temporary accommodation are trying to cling on to normality by holding on to their job.

But charities fear this figure is set to rise as people fall on hard times post-pandemic and the furlough scheme comes to an end. 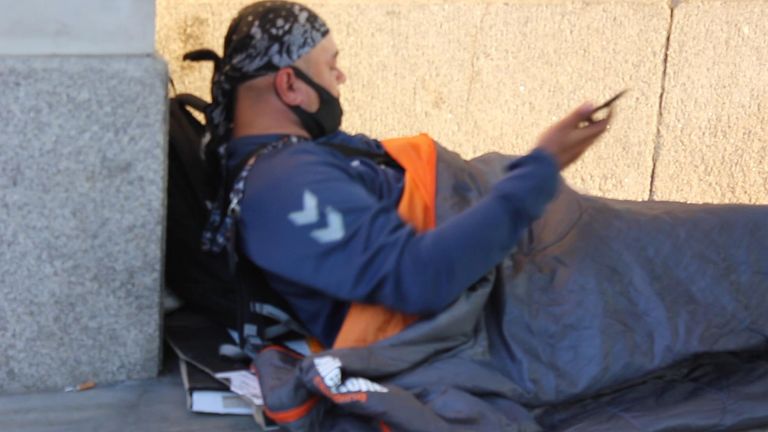 Image:
Florian works on a construction site but is living on the streets

The gig economy means that while there is work available, it’s not secure work, and sometimes doesn’t pay enough to cover the rent.

At a food bank on the Strand in central London we met bar staff, builders and even a former civil servant who became homeless but managed to maintain employment at a bank while sleeping on the street.

Steven Stuart, co-founder of Friends of Essex and London Homeless who are running the food bank, says the demographic using it is changing.

He said: “I don’t think it’s the archetypal homeless person that we once knew. It’s people finding themselves on hard times that may not be used to being in that position.

“We’re talking about hard-working ordinary people these days that are falling off the ladder and finding nowhere to live.

“We’re seeing people who’ve got a job, people are still trying to hold on to that job and they won’t tell their employer I’ve no doubt because imagine their employer may look down on that.” 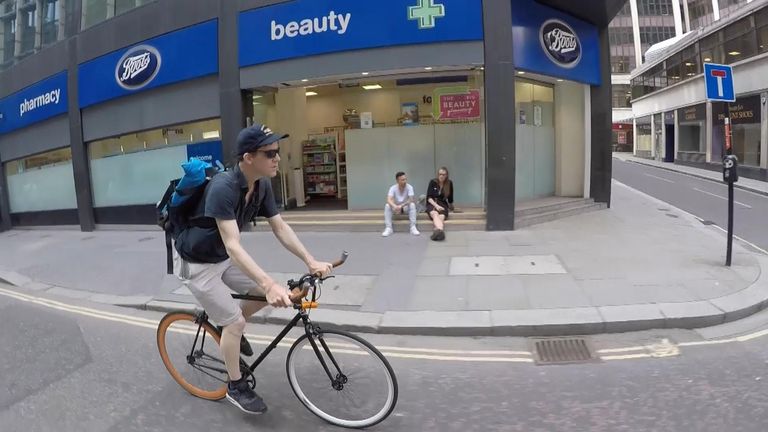 Image:
Nick Rose ended up living in a churchyard after he couldn’t afford to pay his rent

Alan Ellis is a volunteer at the food bank but was homeless three years ago and spent four and a half months living on the streets.

He said: “You sleep holding on to your trainers. I take my hat off to anyone who can work, get up at 6 o’clock in the morning, go to work and come and sleep out here. But there are people who are able to do it.

“I wasn’t one of them. That four and a half months was some of the hardest of my life. It just destroys your soul you know.”

Nick Rose works in the courier business. He says the market became over-saturated in recent years with too many workers and not enough shifts. After a while he wasn’t earning enough to pay the rent – so he went out and bought his new home.

“I bought a ten pound tent from Decathlon and a ten pound sleeping bag and moved into the nearest churchyard,” he said.

He found there was no way to bring up his problems with the courier company he works for.

He says: “A lot of times we’re not even dealing with humans, we are just dealing with an app, and mostly it’s just an algorithm on an app, which is even divvying out the work and deciding who gets to do what. It’s faceless.” 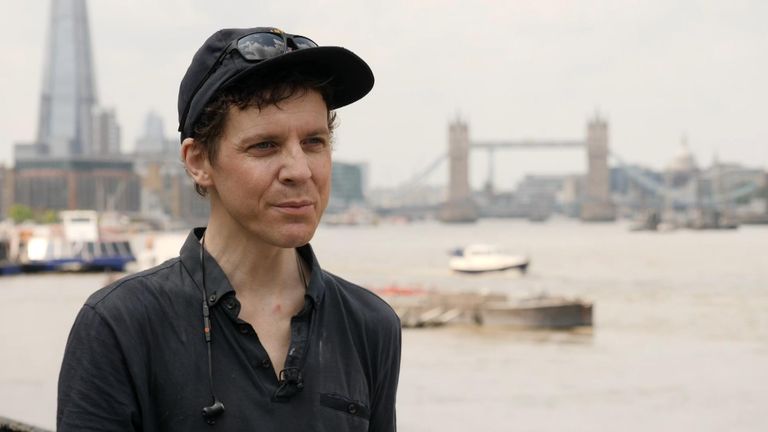 Image:
Nick Rose is a delivery worker who said life is now ‘bleak’

Nick now lives in a hostel but says he still knows people who carry their possessions on their backs along with their deliveries.

He said: “I’ve got friends that have spent long periods of time homeless. I found myself drinking more. You want to drink yourself to sleep because it’s a really unfriendly and threatening-looking world you know?

“It’s very bleak and keeping your spirits up is next to impossible.”

Jon Sparkes, chief executive of the Crisis homeless charity, said: “The fact that tens of thousands of people across England cannot afford a safe and secure home despite working all the hours that they can, throws into sharp focus how dire our housing situation has become.

“We know that the pandemic has caused untold damage to people’s lives and livelihoods, but low wages and high rents were trapping people in poverty and homelessness long before coronavirus shut down entire industries. This simply can’t go on.

“If we are to truly build back better the government must get to grips with the root causes that are pushing people into homelessness – this means building the social homes we desperately need and ensuring housing benefit continues to cover the true cost of rents.”

At the end of the working day Florian returns from the construction site exhausted.

He reaches behind the back of a bin to find his flattened cardboard boxes.

He lays them on the ground then, from inside the refuse container, retrieves his hidden sleeping bag.

His phone is charged from being at work. He might watch the news on it before getting some food and going to sleep.

Two months more of this and he thinks he may have saved enough to get himself off the streets.

Although, only if he manages to get a second evening job he’s just applied for as a cleaner.

One day, maybe next year, he hopes to open a fruit stall. For now he clings to his dreams.