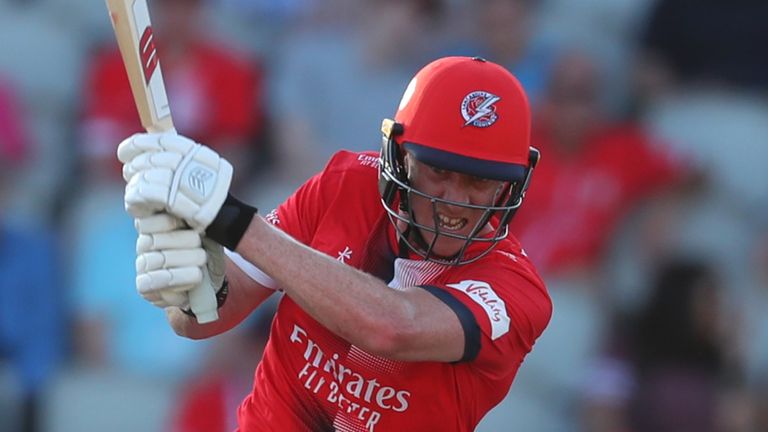 Lancashire slip to 115-7 in chasing Sussex’s target of 271, but then Danny Lamb (68no) and Tom Bailey (45) share in a record-breaking 112-run partnership as the Red Rose county pull off remarkable two-wicket win

A stunning, career-best 68 not out from Danny Lamb saw Lancashire secure a thrilling, two-wicket comeback win over Sussex in the Royal London One-Day Cup on Friday.

At the picturesque setting of Sedbergh School, Lancashire fielded just two List A debutants to Sussex’s nine in this Group A opener, but the hosts slipped to 115-7 in chasing their inexperienced opponents’ target of 271.

Lancashire produced a stunning comeback, though, as allrounder Lamb and seam bowler Tom Bailey (45) shared a record-breaking 112-run partnership for the eighth wicket in 18 overs.

When Bailey departed, one of four wickets to fall to legspinner Archie Lenham (4-59) on his 17th birthday, Lancashire were again struggling at 227-8 in the 46th over, still needing 45 runs.

But 25-year-old Lamb, playing in only his third career one-day game, hit the bulk of the 16 scored off Henry Crocombe’s 48th over and sealed the win with six balls remaining.

Earlier, Australian Travis Head top-scored for Sussex with 56, while wicketkeeper Oli Carter contributed 55, 16-year-old Danial Ibrahim a measured 46 not out and Will Beer a brisk 40.

Similarly, Lancashire then fell to 19-3 inside six overs of their chase. Joe Sarro (2-41) struck twice with the new ball, while Crocombe had former Sussex left-hander Luke Wells (5) caught at slip.

Lancashire stumbled further, to 115-7 in the 28th over, only for Lamb and Bailey to then engineer a remarkable escape act.

So much for red! Reckless London cyclists are slammed for turning a ‘blind eye to the law’