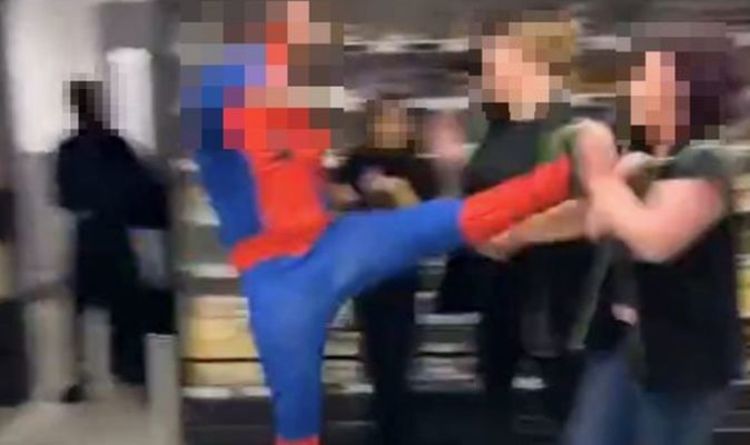 In footage widely shared on social media, the man can be seen kicking and then punching the female member of staff to the ground as the brawl erupted at the supermarket in Clapham Junction. Police were alerted to the incident at 10.40pm on Thursday.

Six people were injured, with one woman taken to hospital with minor injuries.

The other five people were treated at the scene.

Five people have been arrested and remain in custody.

In a statement, the Met Police said: “Police were called at 10.40pm on Thursday 22 July to reports of a group of people involved in a disturbance at a supermarket on Lavender Hill, SW11.

“A woman in her 20s was taken to hospital with a minor injury.

“A further five people were treated at the scene.

“Five people were arrested in connection with the incident.

“They remain in custody at a south London police station.

“Enquiries into the circumstances are ongoing.”

A 31-year-old man has been arrested on suspicion of actual bodily harm, grievous bodily harm, affray and violent disorder.

An 18-year-old woman and a 17-year-old girl have been arrested on suspicion of affray and violent disorder. In a tweet, Wandsworth Police added: “We are aware of videos on social media appearing to show a disturbance at a supermarket in #Clapham last night.

“Five people have been arrested and remain in custody.

“Enquiries are ongoing and we ask anyone with footage to share it with @MetCC.”

A spokesperson for Asda said: ‘’We are aware of an incident which occurred at our Clapham Junction store late last night.

“We do not tolerate any form of violence or abuse towards colleague or customers and we are working closely with the police in their enquiries.’’

Anyone with information about the incident is asked to call police on 101 or tweet @MetCC quoting CAD 7883/22Jul.