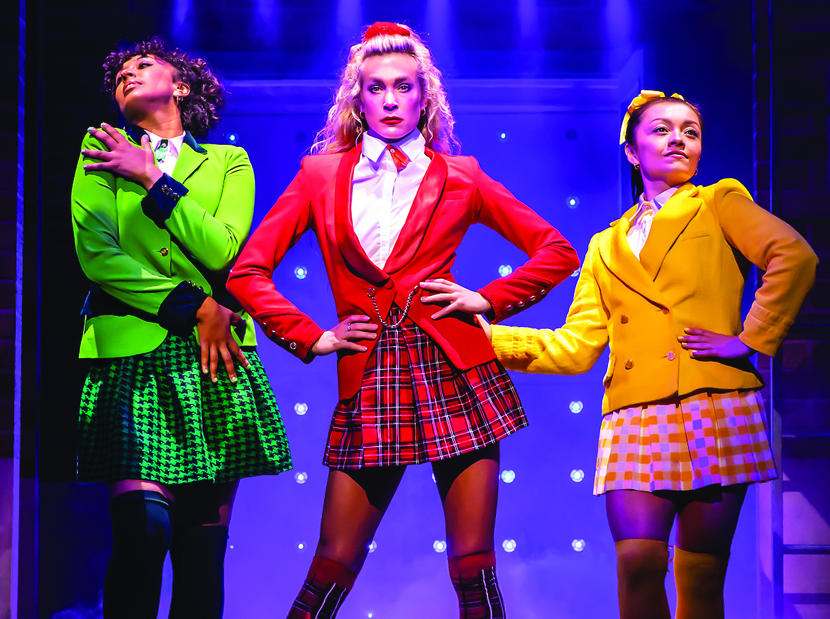 It pulls no punches, is packed with expletives, and is not for the easily shocked.

But the performers are simply electric on stage, and I defy you not to be swept up in their enthusiasm.

“Welcome to the Thunderdome” sings heroine Veronica at the beginning of this cult musical.

She’s got that right. Over the next two hours the young cast romp through deliberately shocking themes (date rape, high school shootings, homophobia, suicide, murder et cetera), via a series of cheeky songs.

All pounded out at high volume. The plot concerns Veronica’s desire to fit into her high school which is under the thrall of three domineering school bullies.

These girls, all rather improbably called Heather (hence the title), are like the Furies from a classical Greek tragedy. Except more lethal.

While the rest of the school seem to be dressed in jumble sale cast offs, they prance around the stage in brightly coloured, sexualized, outfits, boozing, schmoozing, and doing bad.

The trio is led by the fabulously talented Jodie Steele as Heather Chandler “the demon Queen of high school.”

She engages the audience with knowing looks and belts out the hit Candy Store, putting real menace into lyrics like “I like lookin’ hot, buyin’ stuff they cannot.”

Jodie starred in the musical Six, and together with the equally talented Bobbie Little (from Jesus Christ Superstar) as Heather Duke, and Frances Mayli McCann (Evita) as Heather McNamara, we are shown what musical royalty can do.

As the girls sing to Veronica to ditch Sesame Street and come and drink rum and coke with a quarterback in Heather C’s Porshe, some of the front row look like leaving their seats.

Inevitably, this trio somewhat steal the show. Except, they are up against plenty of other top-knotch performances.

Not least from the wonderful Christina Bennington as Veronica, who proves she can act, dance and sing, and the love interest the wonderful Jordan Luke Gage as ‘JD.’ Jordan was the dim-witted but hunky Romeo in &Juliet pre-Pandemic.

Here he plays a hero with a much darker side, as he encourages Veronica to put weed killer in Heather Chandler’s morning coffee (don’t worry – she stays on stage as a ghost).

At one point these two have a duet Our love is God where they sing to each other at such volume that they sound like they’re taking off to the moon. They then agree to become revenging angels themselves “let’s go hunt some jocks.”

There are quite a few showstopping numbers – not least a spirited performance of Never Shut up Again by Bobbie Little.

Many of these are given to the first-rate cameos.

Lauren Ward as one of Westerberg High’s teachers stands out. As do Simon Bailey and Steven Sirlin who take on a variety of roles, and Madison Swan as Veronica’s hopelessly uncool friend Martha.

The writing by Laurence O’Keefe and Kevin Murphy contains a lot of the elements of Greek drama, and has a lot to say about the distractions and temptations of adolescence.

Veronica goes through her rites of passage – discovering sex, alcohol, and what really matters in life. It also has a lot to say about the privileged, and yet bitterly divided, society that is contemporary America.

All this with plenty of gags and dance routines.

Stick your tongue well up into your cheek and go see for yourself. Just don’t tell your parents.

For tickets, go to www.heathersthemusical.com/london

Bexley the most affordable London borough for new homes