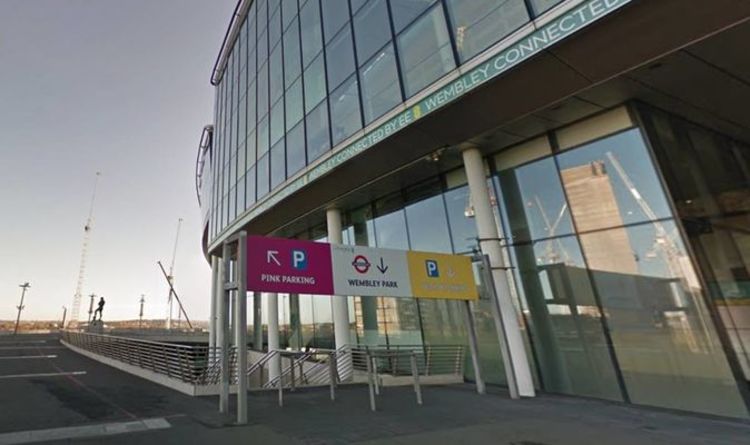 The Met Police said they were called at 5.49pm to reports of a person being hit by a bus in High Road, Wembley, on Sunday. This took place just a couple of hours before the final of the Euro 2020 between England and Italy kicked off at 8pm.

The police added the man’s injuries were assessed as “non-life threatening”.

They said in a statement: “Police were called at 5.49pm on Sunday, July 11 to reports of a collision involving a pedestrian and a bus in High Road, Wembley.

“The pedestrian – a man – was taken to hospital where his condition was assessed as non-life threatening.

“The driver of the bus stopped at the scene.

“No arrests were made. Enquiries are ongoing.”

It comes after police also said early on Monday that 19 of its officers were injured as they confronted volatile crowds while policing the Euro 2020 final between Italy and England on Sunday.

Fans clashed with each other and officials near Wembley stadium after England lost on penalties to Italy.

Beer bottles were thrown and police looked to be on high alert as chants against Italy continued.

Liam Pinnock, 18, described the game as “awful” outside Wembley.

He said: “Italy sort of deserved it, they did play pretty good but I really did think we were going to win for a lot of the game.”

The stadium did release fireworks to celebrate Italy’s win, using the colours of the Italian flag but they were largely ignored by the crowd.

Ticketless fans managed to breach security at Wembley Stadium to get into England’s historic Euro 2020 final.

Security and police are working to remove anyone who made it inside without a ticket, for a match which saw England take an early lead in their bid to be crowned champions of Europe.

The security breach was confirmed by officials shortly before half-time in the match against Italy, which is being attended by Duke and Duchess of Cambridge and their son Prince George.

The Italians fired back midway through the second half with a goal, drawing the sides level, but the 1-1 scoreline took the game to extra time.

A Wembley Stadium spokesman had earlier confirmed there had been “an incident” at the outer security perimeter area, after footage showed a crowd of supporters making a mad dash to get inside, but they said there had been no security breaches.

In an updated statement they said: “There was a breach of security and a small group of people got into the stadium.

“We are now working closely with stadium stewards and security to remove these people.

“Anyone inside the stadium without a ticket will be instantly ejected.”