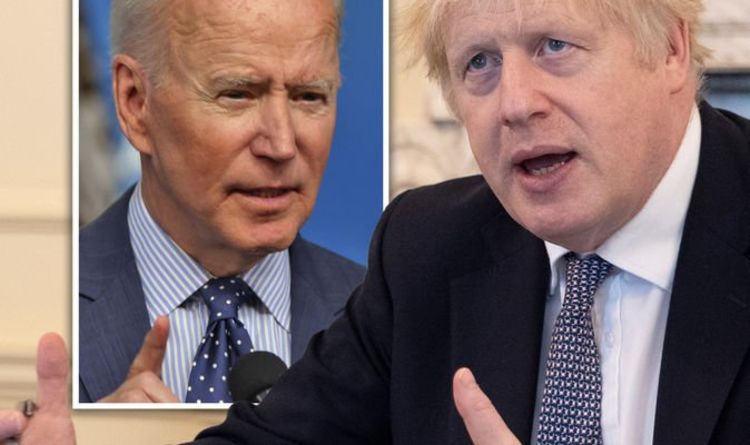 The International Trade Secretary met Katherine Tai, the US trade representative, during a five-day visit from Sunday to Thursday, July 15. A future UK-US free trade agreement was on the agenda and it is understood US officials were impressed by Ms Truss’ diplomatic approach.

However, Washington has urged caution over the timescale of a deal that is not expected to be signed immediately and could take at least 12 months to complete.

“We certainly commit to strengthening the trade relationship between US and UK in line with the Biden administration’s global agenda.

“But be in doubt this will take time and cooperative working, trade deals do not happen overnight and not straight away.”

The Department for International Trade said the meetings also focussed on how the two countries can combat market-distorting trade practices such as industrial subsidies and dumping.

The pair also want to defend workers and companies that play by the rules against unfair trading practices in the global trading system, by combatting forced labour and strengthening supply-chain resilience.

FOR THE LATEST BREXIT NEWS, PLEASE SEE BELOW:

8.30 pm update: The EU has issued a Brexit warning to Lord Frost ahead of crucial statement

Brussels has issued a stark warning to Lord Frost, Boris Johnson and the UK Government as ministers prepare to unveil their strategy on tackling the Northern Ireland Protocol.

The Brexit minister in the Cabinet Office is due to make a Parliamentary Statement outlining the way forward on the Protocol next week.

But the impending announcement has ruffled diplomatic feathers in Brussels who fear the UK will be pushy over finding a long-term solution to implementing the Protocol.

The SNP’s independence dream would hit the Scottish economy “two to three times” harder than Brexit, according to economists.

The leader of the Scottish National Party (SNP) has reignited attempts to gain a second vote on independence from the UK after securing a fourth consecutive victory in the Scottish election in May.

She claimed it “is the will of the country” and warned Prime Minister Boris Johnson against “picking a fight with the democratic wishes of the Scottish people”.

But should she be successful, Scotland faces turmoil in the future, according to a report from the London School of Economics and Political Science (LSE).

A farmer in the UK has sparked fury after claiming Brexit red tape has left him unable to recruit enough workers to pick his crops.

Gerrard Vonk runs a farm in West Sussex and has relied on seasonal labourers from EU countries to pick his crops for the past 33 years.

Journalist Luke Hanrahan spoke to Mr Vonk who said post-Brexit red tape has made it more difficult for seasonal pickers from Eastern Europe to come over.

5.20 pm update: Nigel Farage has joined GB News, with his own primetime show

Mr Farage has announced a primetime show on GB News.

Speaking to the Sunday Express, Executive Producer Christian Mitchell who previously worked with Nigel Farage at LBC, said it was important for the channel to “to stay true to the British spirit of grit, honesty and bravery.”

He said: “Because we’re small, we’re able to listen to our viewers and respond quickly. When they suggest improvements and changes, we hear them and we do it. People know we are listening.”

4.20 pm update: The UK was forced to reopen its Ukraine trade pact after errors in text were found

The UK has been forced to reopen its trade deal with Ukraine.

A report by The Independent discovered that there were errors in the original text.

The trade deal with Ukraine was signed by Prime Minister Boris Johnson in October last year.

The agreement covers the commercial relationship between Britain and Ukraine and also details a defence cooperation to support Ukraine’s sovereignty.

Shadow Chancellor, Labour’s Rachel Reeves has said that Labour will “make, sell and buy more in Britain” as she unveiled a plan in early July to raise standards, award more public contracts to British businesses and create “jobs of the future” in the UK.

Reinforcing the plan, Bridget Phillipson, Shadow Chief Secretary to the Treasury and Labour MP for Houghton and Sunderland South, said: “The next Labour government will have a mission to bring security and resilience back to our economy and public services, and to help our high streets thrive again.

“But visions don’t happen without a plan, and Labour has a three-point plan to start making this a reality.”

Irish fishermen have asked the Government to pay them not to fish due to a reduction in fishing quotas after Brexit.

Plans for a Temporary Cessation Scheme by the Irish Fish Producers Organisation (IFPO) and Killybegs Fishermen’s Organisation have been submitted to ministers.

It comes as Ireland is set to suffer a 15 percent overall reduction in fishing quotas between 2021 and 2026, worth £36million.

Britain is in talks with the US over siting a powerful new radar system in the UK to track objects in deep space.

The Ministry of Defence said the discussions with the Americans had been “positive” with a number of locations under consideration.

The US Space Force is developing a global system to monitor objects up to 22,000 miles from Earth amid concerns about a new arms race developing space.

Northern Ireland’s leading supermarkets have issued a call for urgent action to avoid trade disruption under the terms of the Brexit Protocol.

Six of the UK’s leading retailers, representing over 75 percent of the region’s grocery market, have written to Brexit minister Lord Frost and European Commission vice president Maros Sefcovic, calling for urgent action over trade between Great Britain and Northern Ireland.

11am update: EU waging fishing war as fly-shooting could put UK industry on brink of collapse

The EU has sparked fury among campaigners over its latest fishing method to plunder the UK’s waters after Brexit, as practices employed by the bloc’s fishermen could cripple the British market.

Such is the devastation caused by the practice of so-called ‘fly-shooting’, UK fishermen have warned it is now putting them out of business.

Chris Thorne, Greenpeace’s Ocean Manager claimed the practice is an existential threat to small-scale fishers in the UK.

Scottish ministers have been accused of “playing political games” after pledging to challenge any attempts by the UK Government to impose a post-Brexit trade concept in Scotland without consent.

Boris Johnson wants to bring forward plans for freeports, areas with different customs rules in a bid to turbocharge the UK economy after Britain left the EU.

They are designed to be innovation clusters that boost the economy by offering tax breaks for investment in jobs and infrastructure.

Brexit has put Germany on a collision course with Norway – with Norwegian fishermen poised to increase their quota as a result of Britain quitting the bloc.

And Germany’s fishing industry has branded Norway “self-serving” – while appealing to Brussels to intervene, with one expert saying: “You cannot accept this.”

The UK’s departure has prompted Oslo to unilaterally cut the EU’s fishing quota for cod and is aiming to do likewise with mackerel in a move which Norway’s Fiskeribladet website estimates could be worth an additional £100million.

Owen Paterson has warned of “anger, concern and bewilderment” from Northern Ireland residents because of the Protocol.

The former Secretary of State for Northern Ireland says a better and more permanent solution should be delivered soon over fears that further confusion may lead to anger among people living in Northern Ireland.

The North Shropshire MP said: “My concern is that this sense of bewilderment is turning into anger, and I think that is justified.”