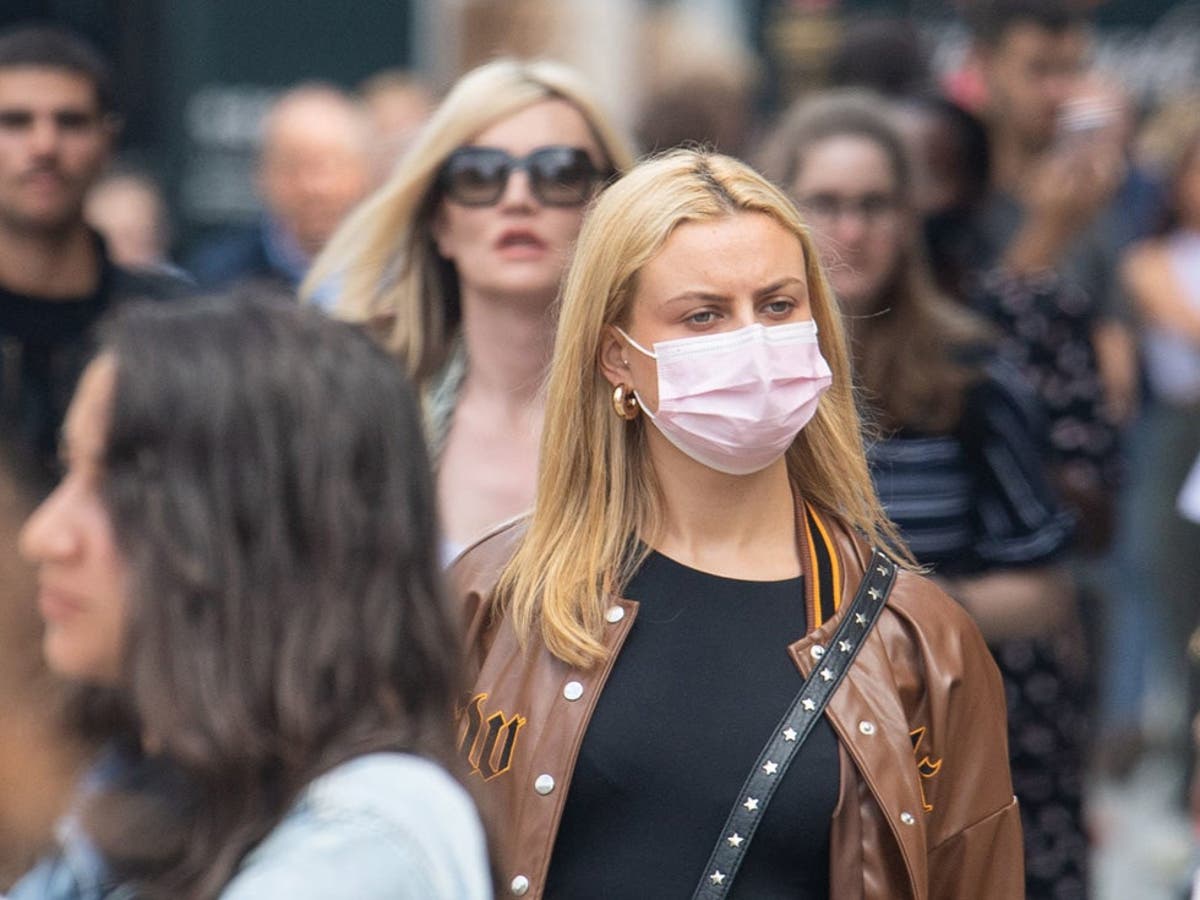 Whitty coronavirus warning: ‘We could get into trouble again surprisingly fast’

The UK’s decision to end most Covid restrictions on 19 July poses “a danger to the world”, an international group of scientists has warned.

The group, which includes official government advisers to countries including Italy and Australia, says the government is pursuing herd immunity by mass infection.

The warning comes as the UK records its highest number of daily cases since the height of the winter second wave.

Some 51, 870 people tested positive for coronavirus in the past 24 hours, the highest daily figure since 15 January.

The international scientists condemned the “reckless” plan by Boris Johnson to press ahead with “freedom day” despite surging infections and rising hospitalisations and deaths.

He urged people to approach the end of lockdown with caution as the number of Covid patients in hospital is currently doubling every three weeks.

Prof Whitty said the key on 19 July – when mask-wearing will no longer be compulsory – was “to take things incredibly slowly”, adding that he fully expected most people to continue to take precautions.

Bulgaria has announced it will not let anyone travelling from the UK enter, as Covid cases surge in Britain.

The country’s health ministry said Britain would be added to its red list, which also includes Cyprus, Spain, Fiji and Kuwait.

When the ban is implemented on Monday, the only people able to fly into Bulgaria from the UK will be Bulgarian nationals or long-term residents.

Paradoxically, from Monday the British government will add Bulgaria to its own green list, meaning anyone flying back into the UK from Bulgaria will not need to quarantine at home on their return.

Some hospitals now at third of winter peak

The number of Covid patients at some hospital trusts in England has risen to a third of the winter peak during the second wave of the pandemic, new figures have shown.

Trusts in places including South Tyneside and Sunderland, Gateshead, Bolton, Manchester and Newcastle have reported numbers of current patients which are 30 per cent of more of their local records hit during the winter.

Figures compiled from NHS England data, show the worst-affected hospitals now have up to 38% of their winter peak already.

At the worst of the second wave, there were 34,336 people being treated for coronavirus infection on January 18 across England.

Although no English hospitals are yet close to hitting those kind of numbers, there has been a steady increase in admissions since the third wave of the pandemic began in May, mostly fuelled by the more infectious Delta variant.

Although vaccinations have meant fewer people catching Covid are being hospitalised by a severe case of the disease, numbers in wards are still increasing ahead of Monday, when all remaining lockdown restrictions will be lifted.

North-east England is currently the regional hotspot of the third wave and is recording its highest rate of new Covid-19 cases since comparable figures began in summer 2020, when mass testing was first introduced across the UK.

Public Health England figures also show the North East had the highest admission rate of any region in the week to July 11, at 10.5 per 100,000 people.

Uber has announced it will still make everyone travelling in one of its taxis carry on wearing a face covering even after the law enforcing this is abolished on Monday.

The company’s UK general manager Ash Kebriti said: “There is nothing more important than the safety of our drivers and the riders who use the Uber app.

“As cities continue to open up, we will ensure that face coverings or masks continue to be a mandatory requirement, unless exempt, when travelling with Uber across the UK.”

There has been vigorous debate over whether the government is wise to scrap legal rules forcing people to wear masks in shops, trains and other enclosed public spaces on Monday.

Some ministers have said the public should carry on masking up even though they will no longer be forced to, and several mayors, including London’s Sadiq Khan, have said they will continue making face coverings mandatory on their own local transport networks.

The Eiffel Tower finally welcomed back visitors on Friday, after its longest closure since World War Two.

Following the announcement of new anti-Covid measures in France, the Paris landmark has reopened under restrictions, with 13,000 daily visitors allowed – about half of its usual capacity – to enforce social distancing rules.

Masks must also be worn, while those aged 18 and above will need an EU Covid certificate or proof of a negative test to visit.

The tower was shut down for a nine-month period between 2020 and 2021, with management suggesting it had lost around 120 million euros during that time.

The Eiffel Tower finally welcomed back visitors on Friday, after its longest closure since World War Two.Following the announcement of new anti-Covid measures in France, the Paris landmark has reopened under restrictions, with 13,000 daily visitors allowed – about half of its usual capacity – to enforce social distancing rules. Masks must also be worn, while those aged 18 and above will need an EU Covid certificate or proof of a negative test to visit.The tower was shut down for a nine-month period between 2020 and 2021, with management suggesting it had lost around 120 million euros during that time.

The government has just released its latest vaccine statistics, revealing a total of 263,574 jabs were doled out on Thursday.

It means in total there have been 46.2m Britons have received their first dose of a coronavirus vaccine. Of those, 35.5m have been fully vaccinated, meaning 87.6 per cent of the adult population has had at least one jab, and 67.5 per cent are doubly vaccinated.

New infections in UK hit 50,000 for the first time since January

More than 50,000 people have tested positive for coronavirus in the last 24 hours, the highest figure since mid January in the height of the second wave.

As of 9am on Friday morning, a further 51,870 cases of Covid were recorded by the government.

This is not far off the highest number of daily cases ever recorded, which stands at 68,053, reported on 8 January.

In addition, there were also 49 new deaths of people within 28 days of testing positive for coronavirus.

This new data brings the total of people confirmed to have caught Covid in the past week to 277,995, an increase of 35 per cent compared to the previous seven days.

There have also been 277 deaths now in the last seven days, an increase of 57 per cent.

The leader of a head teachers’ union has urged parents not to take their children out of school in the final weeks of term just to avoid being “pinged” by the Covid app.

With rising case numbers, more and more people are being told by NHS Test and Trace or the app they must self-isolate for ten days because they are a close contact of someone who has tested positive.

In response, there are fears parents will pre-emptively remove their children before school term ends to ensure they do not get notified by the app and forced to cancel summer holidays.

But Geoff Barton, general secretary of the Association of School and College Leaders, said parents must resist the urge to interfere with their children’s already disrupted schooling just to safeguard their summer break.

“We are concerned about parents keeping children at home over the last days of the summer term to avoid the risk of them being asked to self-isolate and this interfering with family holidays,” he said.

“We are not casting blame on parents because we understand the importance of holidays after such a torrid year, but we would encourage attendance where children are not ill or self-isolating.”

Just one week before the delayed 2020 Olympics begin in Tokyo, fears have been raised the sporting extravaganza could lead to a already record numbers of new Covid cases doubling.

Tokyo has entered another state of emergency as new daily infections have topped 1,000 for the second day in a row, the highest rate for more than six months.

But despite the worsening situation, health experts advising the Tokyo Metropolitan government have reportedly warned the city could see more than 2400 new cases a day by August 11 if the virus continues to spread at the same pace.

Athletes, coaches and officials have already begun streaming into Tokyo from around the world for the games which start on 23 July and continue until 8 August.

As many as a fifth of workers in some firms are having to self-isolate because they were notified by the NHS Covid-19 app they were a close contact of someone who has tested positive for the virus.

Business groups have warned the problem of quarantining employees was soaring out of control and have urged the government to ease self-isolation rules.

More than 500,000 people were “pinged” by the app in England Wales last week, a new record.

Those who are double-vaccinated will not be freed from self-isolation requirements should they be a close contact of a positive case until 19 August, but many companies are asking for this to be brought forward.

Stephen Phipson, chief executive of manufacturing organisation Make UK, said: “This is a problem that has escalated significantly over the last week with more and more companies being affected by isolation, with not just an impact on production but a hit to actual shipments of goods going overseas.

“This is an increasingly serious issue affecting companies of all sizes and sectors. There is now an urgent priority for Government to bring forward the August date given the likely impact of restrictions being lifted next week.”

Some small and large companies are being hit by staff shortages of up to 20%, the PA news agency has reported.

World leaders said in a statement issued after a virtual meeting of the Asia-Pacific trade group APEC that extensive COVID-19 immunization is a global public good and accelerating access to vaccines is essential to overcoming the health emergency.

In a statement posted on the APEC website after a virtual meeting hosted by New Zealand, the leaders of the 21-member grouping vowed to redouble efforts to expand vaccine manufacture and supply and said they would continue to support economies for as long as necessary.