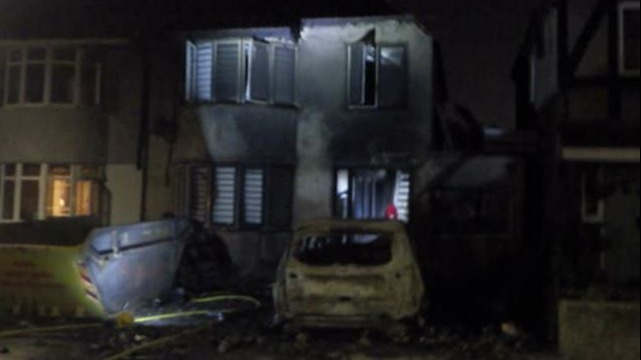 The London home of a family who shot to fame on TikTok has been targeted in a suspected arson attack.

Videos posted online show the burnt out remains of a car parked outside the scorched property.

More than two million people follow the antics of The Smithy Family who became so successful dad Nick gave up the day job to focus on social media.

Speaking after the fire broke out Nick said: “We all got out the house OK, the kids are fine… the dogs are OK. The house is not OK. The kids are at a safe place.

“To the people who have done this, you could have killed our family and not only our family, my neighbours, my friends. It’s unforgivable.”

London Fire Brigade said the flames appeared to spread to the house from a burning car on the driveway.

“We were called to reports of a car alight that had spread up the outside of the house. There were a number of mobility scooters parked outside which had caught alight and were producing a large amount of smoke and flames.

“Everyone was out of the building before we arrived, and crews worked incredibly hard to prevent further damage to the inside of the property and to neighbouring properties.”

The Smithy Family’s TikTok videos began with dad Nick posting pranks and sketches of family life in lockdown which captured the attention on millions of followers.

“It’s crazy really. I’m not going out to work anymore, stressing, worrying. We’re having fun, it involves the kids and it’s made life so much better.”

More than 20 firefighters were called to the scene on Wednesday night and the cause of the fire is being investigated.

A hot sauce festival is coming to south London