The scene of the crash on Kilburn High Road in north west London (Picture: UKNIP)

A driver has crashed into a bus stop in north London, reportedly during a police chase.

The incident took place on Kilburn High Road in the early hours of yesterday morning.

The Metropolitan Police confirmed no one was injured and a man was arrested at the scene on suspicion of theft of a motor vehicle, failing to stop for police and dangerous driving.

Witness Kate Gleeson said she heard ‘lots of loud bangs’ and thought something had hit her building.

Filming the scene just after 2am, she saw a car smashed against a bus stop and police vehicles next to it.

Sharing images and footage of the scene online, she said the back of the car appeared to be gone, and that witnesses had said it had spun a few times during the collision. 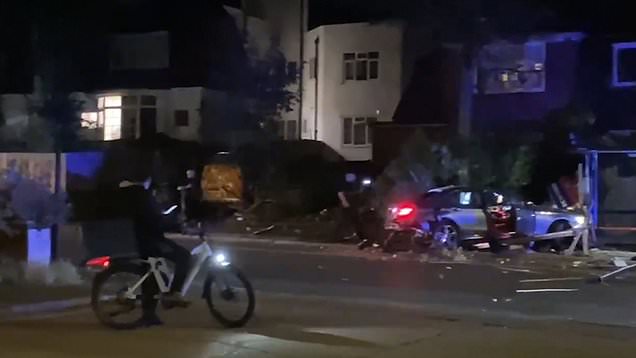 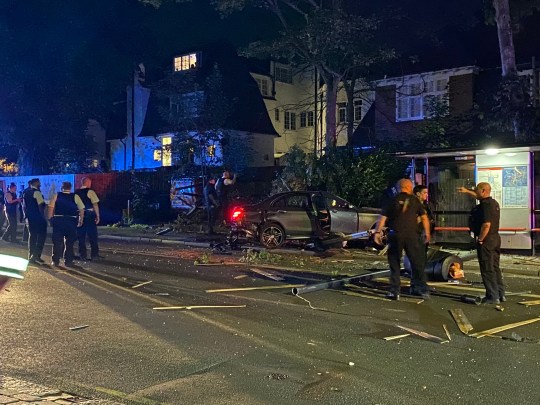 The scene of the crash yesterday (Picture: Jam Press/@KateGleeson1)

One viewer called it one of the ‘joys of living in London’ while another witness said they had heard the crash from their bedroom.

A spokesperson for the Metropolitan Police said: ‘Police were called at approximately 2.04am on July 14 to reports of the theft of a motor vehicle.

‘Police engaged in pursuit of the vehicle and a short time after it collided with a bus stop on Kilburn High Road.

‘A man was detained and arrested at the scene on suspicion of theft of motor vehicle, failing to stop for police and dangerous driving.

‘He sustained no injuries.

‘A bus lane closure was put into place which has since been reopened. Enquiries continue.’

Janis Winehouse: I feel Amy’s presence with me always

Zoopla asks is your home ‘earning’ more than your salary?