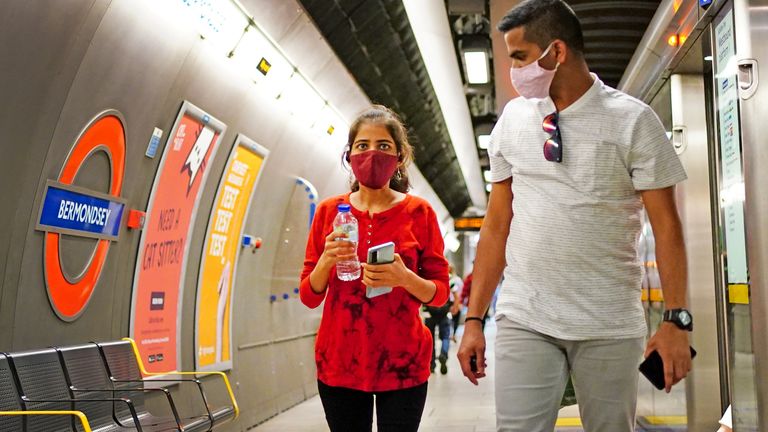 Elected regional mayors across England have urged the government to continue making face coverings compulsory on public transport when most COVID restrictions are lifted on Monday.

The Labour metro mayors for West Yorkshire, Greater Manchester, Liverpool City Region, North of Tyne, West of England and South Yorkshire said they would take steps to require or encourage mask wearing on local networks where their limited powers allowed it.

But they warned that without a continued national mandate there would be a “ridiculous mismatch” of rules across the country which will be “confusing” for passengers next week.

Image:
Sadiq Khan has asked TfL to make mask wearing a ‘condition of carriage’ after 19 July

It comes as Sadiq Khan has warned commuters and tourists that “hundreds” of Transport for London (TfL) enforcement officers will continue to impose the wearing of face masks on services in the capital beyond 19 July – and those caught breaking the rule will be thrown off trains, Tubes and buses.

The mayor of London said he was also exploring making this a by-law – which would require the Metropolitan Police and British Transport Police to enforce the measure too.

He said TfL was arguably one of the “safest and cleanest” transport authorities in the world, but maintaining mandatory mask-wearing offered “an additional layer of protection and reassurance” where people cannot often maintain social distancing.

People in West Yorkshire and South Yorkshire will have to continue wearing face masks in bus stations operated by the combined authorities.

And passengers using the Metro in the North East will also be required to wear a face covering after restrictions are lifted on Monday.

Mr Khan pointed to evidence from the government’s own scientific advisers and the World Health Organization (WHO) which he said showed wearing a face covering reduced virus transmission in indoor settings, while new research from the US Centers for Disease Control and Prevention suggested it may also reduce the chances of mask-wearers catching COVID-19.

“It is the most unselfish thing you can do,” he told Sky News.

“We have got hundreds of TfL enforcement officers – they will be there to make sure people are following the rules.

“If you get on one of our trains, tubes, buses, Docklands Light Railway, overground trains, TfL rail, and you are seen not to have a face mask and you’ve not got a good reason, you aren’t exempt, you’ll be asked to leave.”

From Monday in England the legal requirement for mask-wearing will be dropped, but Mr Khan said the coronavirus rule will remain in force on public transport in and around the capital.

He said from the evidence he had seen Londoners and those visiting the city “have done the right thing… making the right choice to wear a face mask without the need for enforcement to take place”.

“But if there is a need for greater enforcement, a need for more TfL enforcement officers, we’ll look into that, and at the same time we are exploring making this a by-law which means we could use both the police service in London but also British Transport Police,” he added.

The transport secretary has said the government expected – and wanted – different companies and travel networks to adopt their own COVID rules on masks after 19 July.

Grant Shapps told Sky News there was no issue with rules differing in various places, and that he had expected TfL, “which tends to have crowded commuter trains” to keep the requirement as a condition of travel.

“On the other hand, if you are on a long distance train and you are the only person in a carriage, it’s late in the evening or something, there is clearly no real point in wearing a mask,” he said.

Speaking about services outside of London, Katy Taylor, chief customer officer at the Go Ahead transport group, told Sky’s Ian King Live the operator was not going to make masks mandatory on its bus and rail services.

She said: “If they [the government] deem that [not wearing masks is] appropriate, we will absolutely follow that, but we’re not going to insist upon it [wearing masks] for our own customers outside of government advice.”

Face masks will remain mandatory in Scotland from next week when restrictions are eased, First Minister Nicola Sturgeon has said, while the position in Wales is expected to be outlined later on Wednesday by First Minister Mark Drakeford.

The latest Covid lockdown rules that will change from July 19