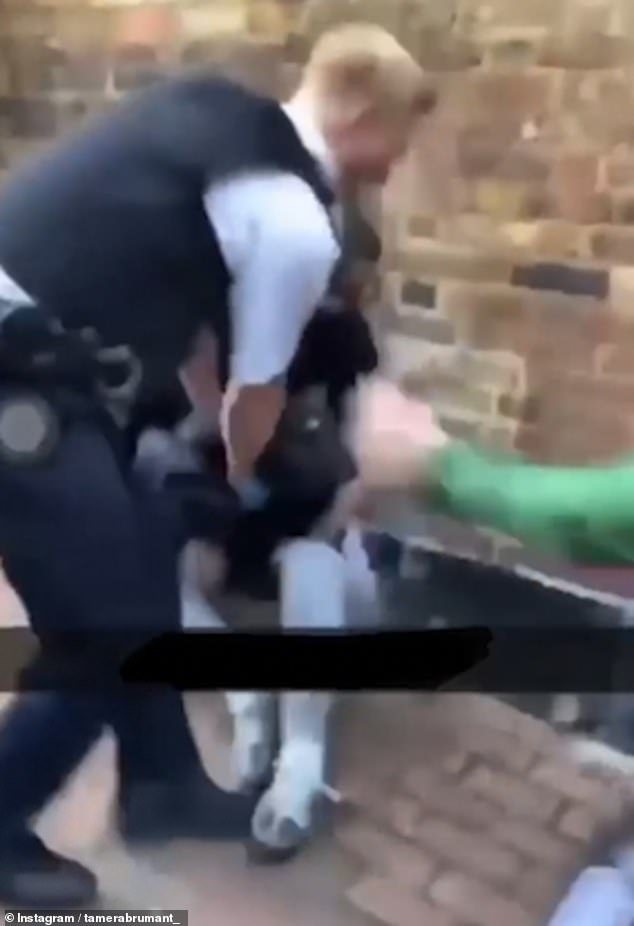 By Laurence Dollimore For Mailonline

Shocking footage shows an officer kneeing a youth in the face as he arrested him on a west London street.

Police said the incident, in Uxbridge on July 9, is being investigated by the Met’s Directorate of Professional Standards following a complaint.

The footage was shared online on July 11, by a woman who said the youth was 15 and her cousin.

In the clip, the officer can be seen grappling with the teen before kneeing him twice in the face.

The teen’s friends can be heard screaming: ‘Get off him!’ as one girl in a green jacket tries to pull the policeman away.

The boy’s ‘cousin’ said the teen had to be hospitalised after being left with concussion.

The clip posted online starts with a man – believed to be a security guard – throwing the boy to the ground and sitting on him.

The teen then manages to half stand up as the same man keeps him in a chokehold.

A Met police officer is filmed kneeing a boy, believed to be aged 15, in the face in Uxbridge, west London on July 9

It is then that a police officer, who had been talking to a witness nearby, approaches the pair.

Footage taken from both sides shows him grappling the teen before kneeing him twice in the face.

The footage was shared on Instagram with the caption: ‘My fifteen-year-old cousin was stopped and searched with nothing on him, but was still assaulted by a big security guard in Uxbridge who slammed and man handled him.’

She said the teenager was left with a concussion and multiple injuries in which he was hospitalised for six hours.

She added: ‘They need to be held accountable. Having a badge shouldn’t make you untouchable.’

Witnesses told Mail Online the incident happened on Friday down an alleyway off the busy central Windsor Street. 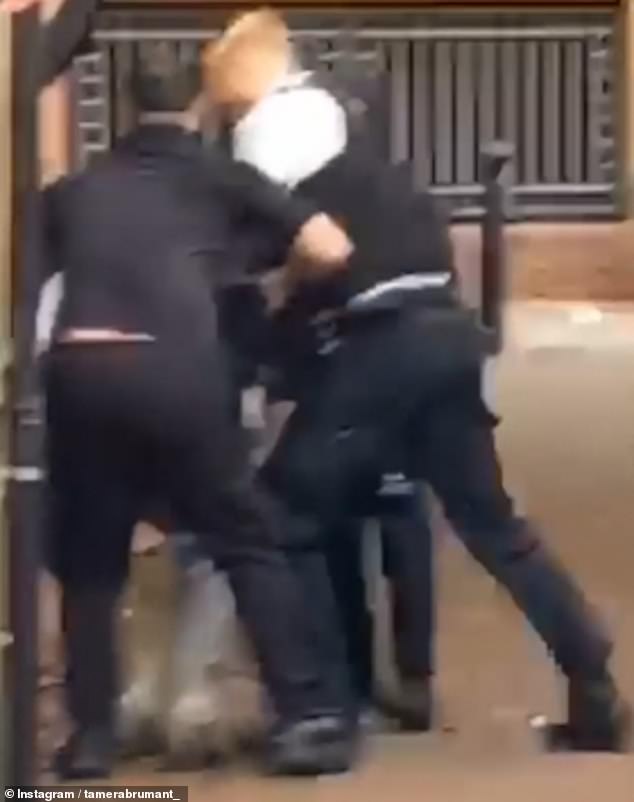 They thought the security guards may have been working at a nearby off-licence or pub.

Metropolitan Police said in a statement: ‘Police were called to Windsor Street, Uxbridge, at 19.11hrs on Friday, July 9, to reports of officers being assaulted.

‘A male was arrested on suspicion of common assault and obstruction of a drugs search.

‘During the arrest, force was used to detain him after he resisted the efforts of a police officer and two nearby security guards.

‘The male was taken to hospital as a precaution and later discharged and taken into custody. He has since been released under investigation.

‘Two females and a male were detained and arrested on suspicion of public order offences. They were subsequently de-arrested.

‘The matter has been referred to the Met’s Directorate of Professional Standards (DPS) as a complaint has been received.’

Planned road closures in and around north-west London

Drivers could be fined £2,500 for wearing everyday item while driving