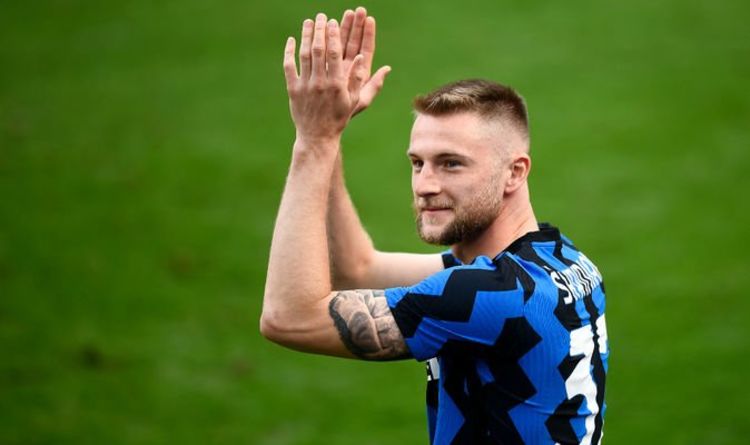 Despite reported interest from Tottenham, Milan Skriniar is reportedly keen to stay at Inter Milan this summer. The Slovakian defender has been linked with Spurs before, with links re-emerging since Fabio Paratici joined the club as director of football.

Skriniar started 31 games for Inter last season as the club won Serie A for the first time in a decade.

He has two years remaining on his contract at Inter, having signed from Sampdoria in 2017.

Inter, who are now managed by Simone Inzaghi, are rumoured to have placed a £51.5million price tag on the centre-back.

And, even if Tottenham were happy to pay that sort of money, Calciomercato is reporting that Skriniar wants to stay at Inter.

The defender has reportedly expressed his love for the Serie A side, which was emphasised when he sacked his agent to personally negotiate a new deal with the club.

Skriniar could be the second defender to reject a move to Tottenham, with Sevilla’s Jules Kounde reportedly set to snub a move to north London.

Spanish outlet AS say that the French international wants to play in either the Europa League or the Champions League, and not the inaugural Europa Conference League that Tottenham have qualified for.

Do you want an exclusive pre-season preview for YOUR club – both in your inbox and through your letterbox? Head over here to find out more and secure your copy.

This could mean that either Chelsea or Manchester United could pip Spurs to Kounde’s signature.

However, both teams are likely to prioritise other options or positions, meaning Kounde could remain at Sevilla for another season.

Meanwhile, Tottenham are also reportedly interested in Southampton striker Danny Ings – as a partner for Harry Kane, not a replacement.

Ings currently has just one year left on his deal with Southampton, which means they could look to sell him this summer to avoid losing for nothing next year.

The England international has scored an impressive 34 league goals over the past two seasons, which has led to links with Spurs.

The Telegraph claims that Nuno plans to operate a two-striker system next season, which means that Tottenham will look to sign at least one new attacker over the summer.