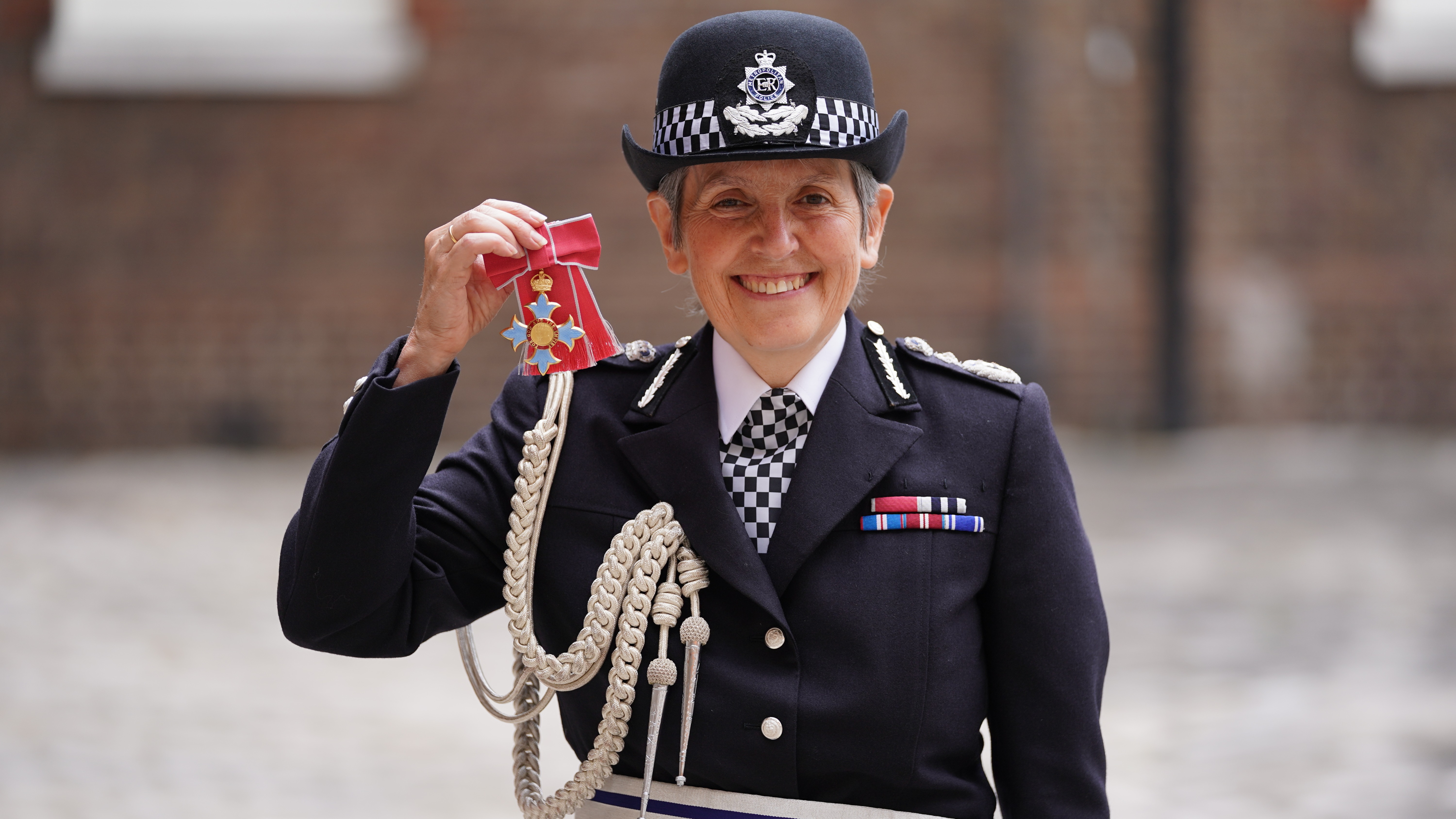 Dame Cressida said she was “very proud” of her officers and the command team, as she was made a Dame Commander by the Prince of Wales.

The Met have been accused of failing to install a ring of steel around Wembley and prevent a violent element from gaining access to the stadium.

Mayor of London Sadiq Khan has insisted the force has his full support despite the chaotic scenes in Wembley and across the capital during Sunday night’s final against Italy.

Football Association chief executive Mark Bullingham said on Monday that a full review will take place into what had happened and he accused “drunken yobs” of trying to force their way into the stadium without tickets.

During the investiture ceremony at St James’s Palace on Wednesday, Dame Cressida, who was honoured for serving the public during a policing career lasting almost 40 years, dedicated the honour to her many colleagues.

Metropolitan Police Commissioner Cressida Dick is made a Dame Commander

Asked to respond to the criticism around the Euro 2020 final policing, Dame Cressida said: “There will be a full debrief of course, there’s an awful lot of inaccurate speculation about what happened at the moment.

“I’m very proud of my officers and the command team.”

There is also speculation about the future of Dame Cressida, with reports claiming the country’s top police officer is considering seeking an extension to her term in Scotland Yard.

Asked if she wants to continue in her job, she replied: “I’m very focused on my job, I love my job, it’s a huge honour – it’s a real privilege to be doing my job, I’m very happy.”

Mr Khan said: “It was not right what happened on Sunday, not just at Wembley, but across our city, with the hooligans from outside London breaking the law in Leicester Square, Liverpool Street, Trafalgar Square, Wembley and so forth.

“The FA are reviewing their arrangements at Wembley, the Met Police Service will take part in that review.”

He added the force was examining CCTV and body-worn videos and highlighted that 19 officers had been injured: “What’s also really important, that I say loudly and clearly: the police have my full confidence and full support.”

Dame Cressida’s leadership of the force and its integrity have come under increasing scrutiny in recent months following a series of damaging events.

On Friday, Met Police Pc Wayne Couzens pleaded guilty to the murder of Sarah Everard after previously admitting her kidnap and rape.

The Met was also criticised over the policing of a vigil for Miss Everard at Clapham Common, near where she disappeared, which was mired in controversy after officers arrested a number of protesters.

Vigil for Sarah Everard in March

A recent report into the unsolved 1987 murder of private investigator Daniel Morgan also accused the Met of “institutional corruption” after concluding the force had concealed or denied failings in the case to protect its reputation.

The Met Police boss was made a dame in Theresa May’s resignation honours in 2019 and said about the recognition: “It’s absolutely fantastic, a huge honour, wonderful to meet His Royal Highness and to be here in St James’s Palace.

“I’m receiving it on behalf of all my hardworking colleagues who have over nearly 40 years given me massive support and been absolutely brilliant.”

Dame Cressida began her career in the capital with the Met in 1983 before moving to Thames Valley Police and returning to London to hold a variety of command roles in the police response to the 9/11 attacks and the Boxing Day tsunami in 2004.

She was thrust into the public eye in 2005 after she was in charge of the operation that led to the fatal shooting of Brazilian Jean Charles de Menezes, who was wrongly identified as a potential suicide bomber.

A jury later cleared her of any blame in his death.

She was the national lead for counter-terrorism for three years, and also led security operations for the Queen’s diamond jubilee and 2012 Olympics before being appointed commissioner in 2017, the first woman to hold the post.

Looking back she said: “I think it’s true today as it was when I joined in 1983 – people join because they want to help people, protect people, bring justice.

“I talk to my young recruits now and they will say the same thing – they want to do something useful and helpful in the community and it’s an incredibly satisfying job.

“It’s a privilege to do that sort of job and I’ve had a wonderful time.”