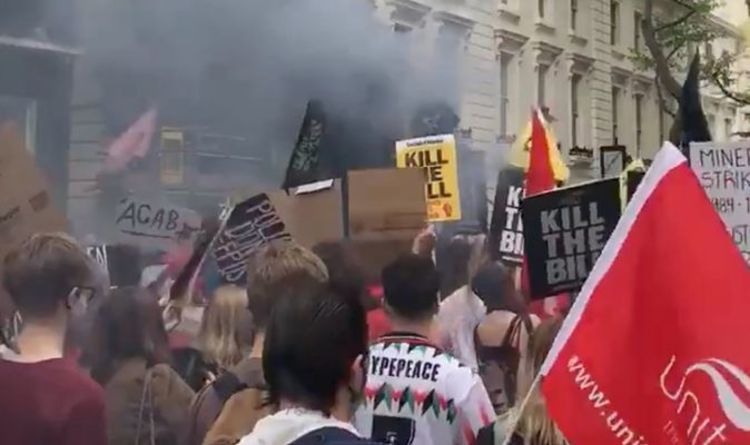 Hundreds of protesters in London are demonstrating towards the controversial policing invoice. The ‘Kill the Bill’ march is heading in direction of Parliament Square after beginning in Russell Square this morning. Protests are going down up and down the nation and mark the fourth day of marches towards the invoice which the group state will forestall folks’s proper to protest.

Demonstrators may be heard shouting “Our streets! Our streets!” whereas others chant “A C A B, all cops are b*******”, “black lives matter” and “no justice, no peace”.

While one other clip protesters repeatedly shout “kill the invoice!”

And one other video a flare may be seen billowing smoke as lots of of demonstrators push by way of central London.

The march is because of makes its means by way of the metropolis in direction of Parliament Square.

JUST IN ‘What you’ve got completed sir is kind of frankly despicable’: An open letter to Prince Harry

Protests are additionally going down across the nation in cities together with Cambridge, Newcastle and Bristol.

In Newcastle, the protest kicked off at 1pm, organisers tweeted: ‘The Police, Crime, Sentencing & Courts invoice have to be defeated!

While in Bristol protesters are anticipated to begin their march at 4pm, with these organisers tweeting: ‘#KillTheBill Solidarity: Police, Crime, Sentencing and Courts Bill’… Saturday twenty ninth May Bristol from 16.00 at College Green. #protest #UK #Bristol #Police.’

The Government continues to insist the laws would have minimal affect on the proper to protest regardless of campaigners from across the political spectrum fearing the Bill will result in a crackdown on the proper to free speech.

The marches made headlines after violence erupted in Bristol inflicting tens of millions of kilos value of harm to buildings, police automobiles and public property.

Police vans had been set on fireplace, and fireworks and projectiles had been hurled at officers trapped in a constructing, at the time Home Secretary branded the violence “disgusting”.