From entertaining her friends by dancing on tables in saucy outfits, to her scandalous marriage to a Russian prince, her life was a heady mix of mischief and glamour right to the end.

Society beauty Princess Emma Galitzine, who was once hailed as having ‘the naughtiest face in London’ and the behaviour to match, passed away last month at the age of 70 after suffering a fall at home.

Married four times, her first husband was the Daily Mail’s diarist Nigel Dempster,  Fleet Street’s undisputed king of gossip for 32 years, and his wife’s colourful life could certainly have provided ample fodder for his columns.

Born Emma Magdalen de Bendern in the 50s, she was renowned for her flirtatious and fun-loving behaviour, and during one dinner party, decided to change into skimpy riding gear and thigh-high boots to perform a dance on the table for guests after the main course.

After splitting from Nigel in 1972, she wed businessman Giles Trentham, and Prince George Galitzine from one of the noblest families in Imperial Russia – a direct descendant of Catherine the Great, before remarrying Giles shortly before his death.

Emma went on to marry Nigel Dempster after they met at the wedding of a friend in 1970 (pictured far right, Emma and Nigel) 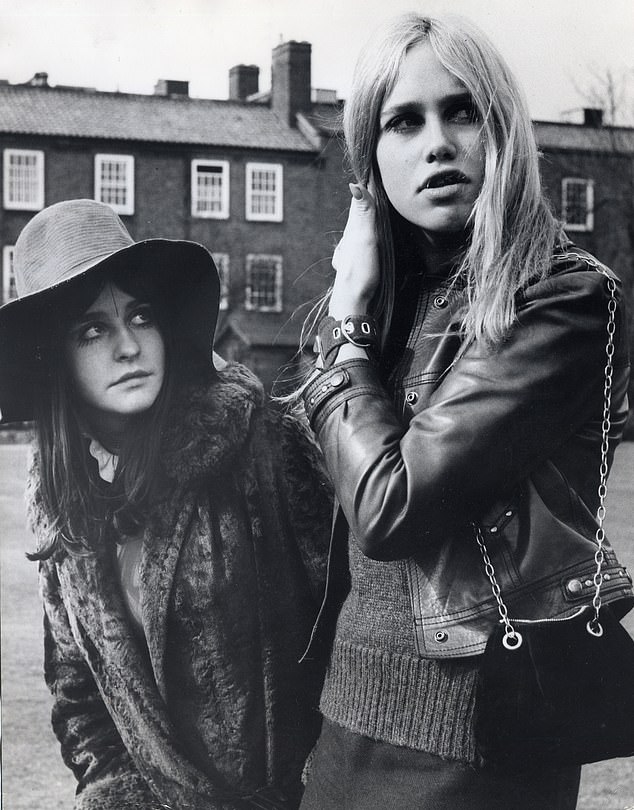 Society beauty Princess Emma Galitzine, who was once hailed as having ‘the naughtiest face in London’ and the behaviour to match, passed away last month at the age of 70 after suffering a fall at home (pictured left, with Carinithia West)

Born in London in 1950, Emma was the third child of Lady Patricia Douglas, daughter of the 11th Marquess of Queensberry, who was at the time married to John de Forest, an English amateur golf champion who used the Lichtenstein title Count John de Bendern.

Seven months after her birth, Lady Patricia and Count John divorced with Emma later confiding in a friend that her mother’s husband was not her biological father.

She said her biological father was Herman ‘Marno’ Hornak, a sculptor who became her mother’s second husband.

Her siblings were Simon, who works in conservation with Madagascan lemurs, and Caroline, who married saxophonist Barney Wilen and associated with Olivier Mosset, Amanda Lear, Salvador Dalí, Andy Warhol and Lou Reed.

WHO WAS NIGEL DEMPSTER?

Nigel Dempster was best known for his celebrity gossip column in the Daily Mail, with the newspaper’s editor at the time of Mr Demspter’s death in 2007, aged 65, Paul Dacre, reported as saying: ‘His scoops were the stuff of legend and his zest for life inexhaustible.’

Mr Demspter’s avidly read column for the Daily Mail saw him chronicle the personal lives of celebrities and the aristocracy.

Some of his scoops included the impending break-up of rock star Mick Jagger and his then wife Jerry Hall, the engagement of Prince Andrew to Sarah Ferguson, and the 1976 resignation of Prime Minister Harold Wilson.

He was educated at Sherborne School in Dorset, where – after gaining three O-levels – he was expelled for being a ‘disruptive influence’ after several misdemeanours.

After short periods working in the City and in public relations, Mr Dempster joined the Daily Express in 1963, before joining the Daily Mail in 1971, where he stayed until 2003.

He was initially deputy to Paul Callan, but replaced him as the newspaper’s diarist in 1973. He began writing his column for the Mail on Sunday in 1986. He retired from editing the Daily Mail and Mail on Sunday diaries bearing his name in 2003.

Nigel, whose eponymous column ran in the Mail from 1973 to 2003, was married twice, first to Countess Emma Magdalen de Bendern, a daughter of Count John Gerard de Bendern, then to Lady Camilla Osborne, daughter of the 11th Duke of Leeds. Both marriages ended in divorce.

By his second marriage he had a stepdaughter, Emily Kate Godolphin Harris, and a daughter, Louisa Beatrix.

Dempster had been suffering from progressive supranuclear palsy, a devastating brain disorder which finally claimed his life at his home in Ham, South-West London.

“His fame became synonymous with the Daily Mail and he was required reading for the great and the good.

“Nigel’s genius was his ability to tell the story while maintaining a friendly relationship. To me and my family he was more than just a great journalist, he was a true friend and his passing will be felt keenly.”

Paul Dacre, editor-in-chief of Associated Newspapers and editor of the Daily Mail, said: “Nigel was not only a treasured friend and a brilliant colleague, but also one of the best diary writers Fleet Street has ever known. His scoops were the stuff of legend and his zest for life inexhaustible.

“He liked nothing more than to deflate the egos of the idle rich and puncture the pomposity of the powerful. It made him one of the most talked-about figures Fleet Street has ever seen. We will all miss him.” 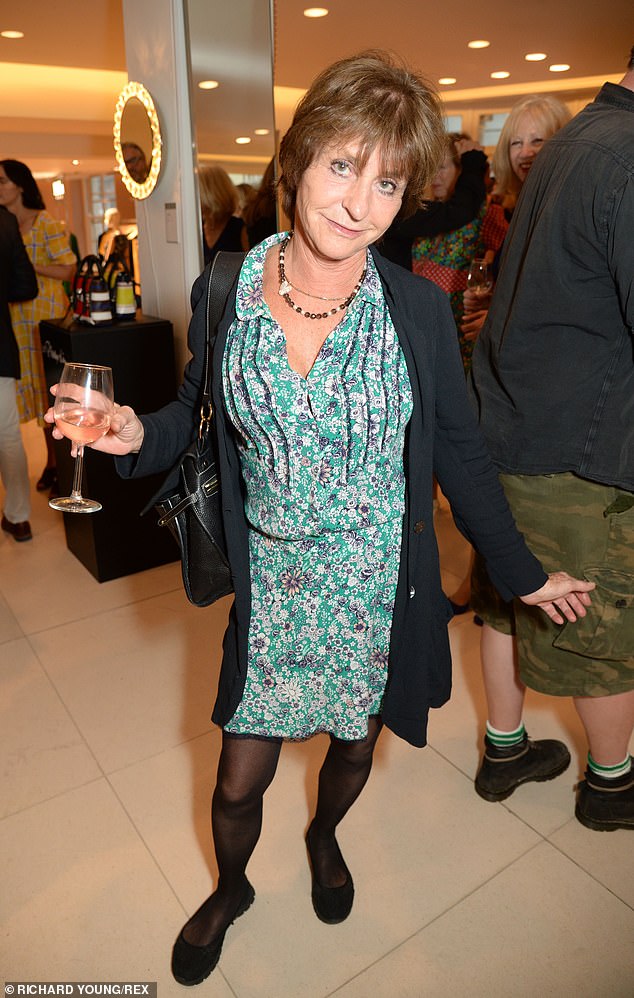 Born Emma Magdalen de Bendern in the 50s, she was renowned for her flirtatious and fun-loving behaviour, and married four times (pictured, in 2018 at an event in London) 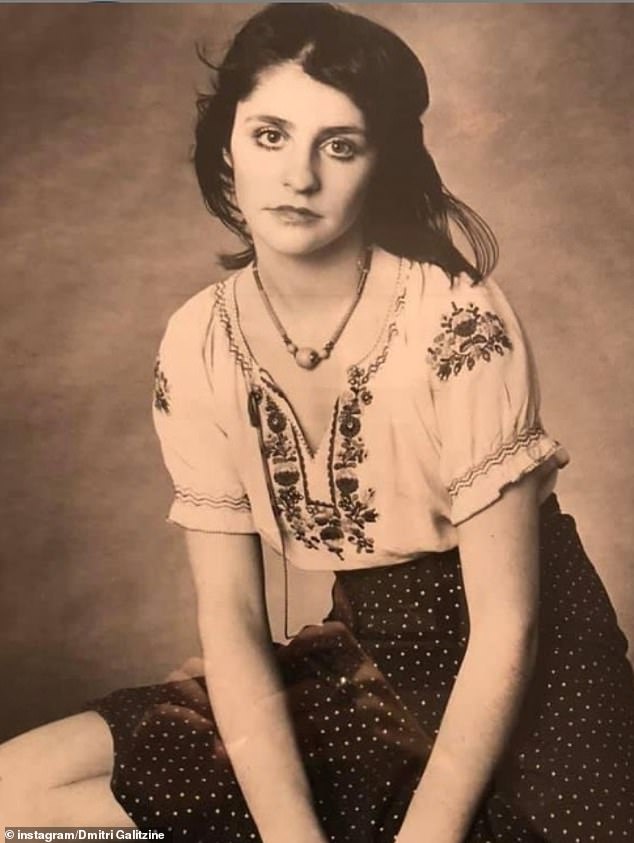 Society beauty Emma was bequeathed a fortune by her mother’s first husband, she also inherited a rebellious streak and fell into a crowd of petty criminals as a teenager (pictured)

Caroline lived an equally playful life to her sister Emma, achieving infamy in 1968 when she was photographed bare breasted in a recreation of Delacroix’s painting Liberty Leading the People. She was subsequently disinherited by her wealthy grandfather.

Emma was home schooled but her great passion was for riding horses, and she quickly gained an education from Beechwood Riding School in Surrey.

She kept horses at home in Oxfordshire, first at Caulcott and later at Great Tew, and once took her pony up to her attic bedroom.

Sadly the horse was not keen to come down the stairs and the fire brigade ended up having to rescue him through the roof.

Bequeathed a fortune by her mother’s first husband, she also inherited a rebellious streak.

By the time she was a teenager, she had fallen in with a crowd of petty criminals, including John Bindon, an actor and gangster who claimed he once had a fling with Princess Margaret, and Bryan Walsh, who had done several stints in jail, had a drug problem and was a getaway driver for bank robberies.

She recalled: ‘It was just fun hanging out with these guys; smart little aristo me, all blissed out. It was quite a sexy atmosphere.’

She was a debutante at Queen Charlotte’s Ball at the Dorchester Hotel, and departed from the event on the back of the leather-clad Walsh’s motorcycle. 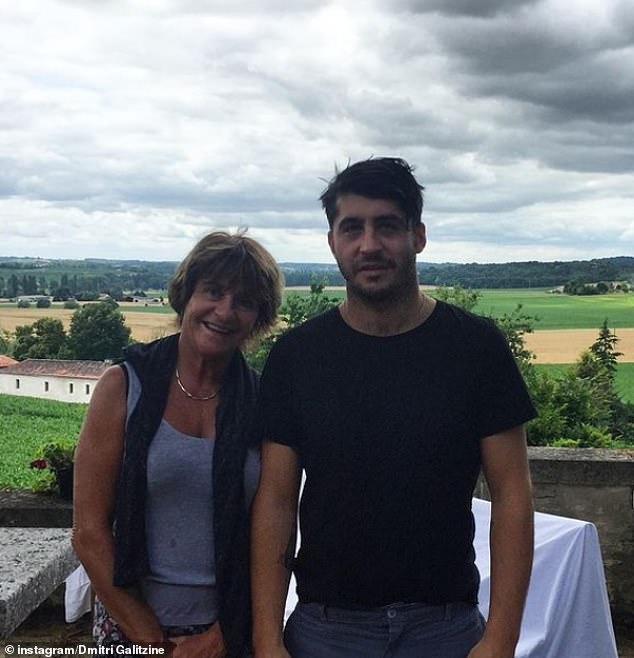 Princess Emma welcomed a son Dmitri with her third husband Prince George Galitzine, an art director who was descended from one of the most noble families in Russia (pictured together)

Just days after she turned 18, Emma gave birth to her first child with Walsh, a girl called Atalanta.

Aged 21 and a single mother, she met Nigel Dempster in 1970 at the wedding of a friend.

‘When he mentioned a horse he fancied for the next day – it was L’Escargot at Cheltenham – I wanted to show off so I gave him £20, which was a lot in those days, and asked him to put it on for me,’ she told his biographer.

L’Escargot romped home and Emma rang Dempster to ask for her winnings. ‘You’ll have to come out for dinner to collect them,’ he said. 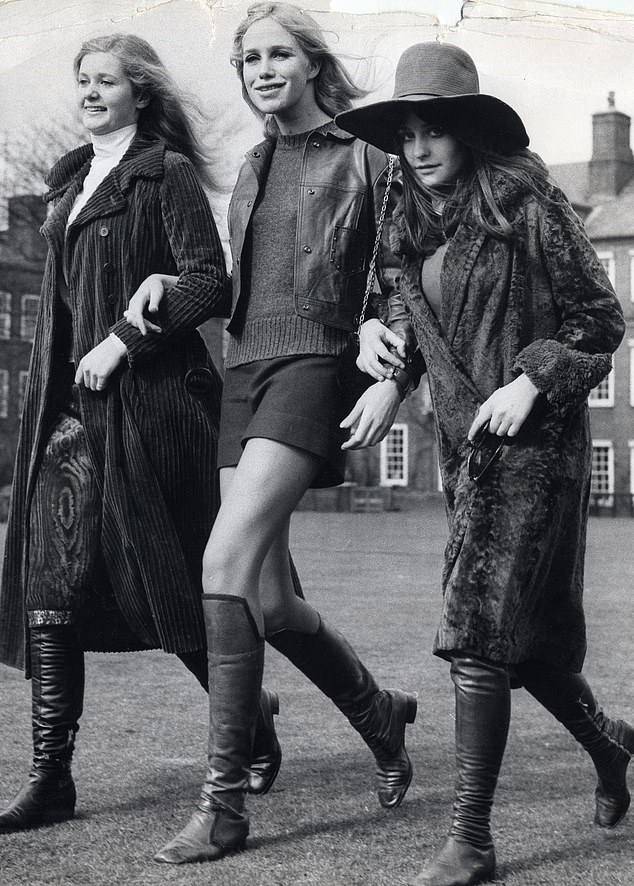 Emma was a debutante at Queen Charlotte’s Ball at the Dorchester Hotel, and departed from the event on the back of the leather-clad Walsh’s motorcycle (pictured, far right, with Carinthia West and Kerena Mond)

Nigel, born in India in 1941 and educated at Sherborne, worked briefly as a broker for Lloyd’s of London before joining the Daily Express’s William Hickey column in the 1960s, moving to the Mail in 1971.

During the 1970s he also contributed to Private Eye, inventing the Grovel column and mischievously giving the Royal Family nicknames which have stuck to this day, including Brenda for the Queen.

During a career which spanned five decades, he produced a seemingly endless string of scoops, ranging from Harold Wilson’s shock resignation to the news of Prince Andrew and Sarah Ferguson’s engagement.

Outside Fleet Street, his great passion was racing. He owned or co-owned several horses.

After a breakneck romance, Nigel and Emma had a grand wedding with a reception at Les Ambassadeurs. Bizarrely, Emma’s mother joined the couple in bed for the first night of their marriage and they all cuddled up together.

Emma said: ‘The whole thing was a serious mistake. I did it for all the wrong reasons – for standing and security – but also for fun.

‘I’d missed out on all that from having a child so young, and so it was very exciting to be taken to Ascot and to balls, and to meet all these lords and ladies.’

Marriage did little to curb the new Mrs Dempster’s enthusiasm for unorthodox liaisons. 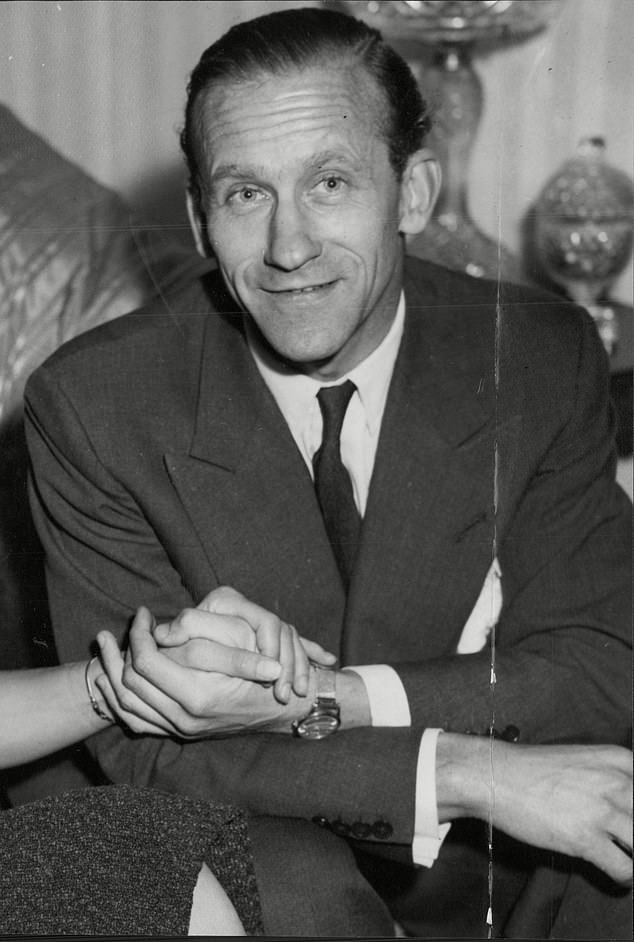 By 1986, Emma married Prince George Galitzine, an art director who was descended from one of the most noble families in Russia

Six months after the nuptials, she was in the south of France, playing hooky with an antiques dealer named John Hobbs.

Halfway through their holiday, Hobbs was rumbled by his wife and rushed home without packing.

Emma agreed to bring back his things – but when she arrived at Heathrow, she was told the case containing his clothes had been lost in transit. She arranged that, when found, it should be delivered to her neighbour.

This plan went disastrously awry when overzealous airline staff spotted the label reading ‘Mrs Nigel Dempster’. Thinking they were obliging the rising media star, they dispatched it to him in Fleet Street.

‘Poor Nigel,’ chortles Emma, ‘opened it in front of everyone, only to discover it was packed with another man’s clothes.’

There were apparently fisticuffs between Nigel and Hobbs, but the divorce in 1974 from Emma was painless.

Their marriage dissolved in 1974 and by 1986, Emma married Prince George Galitzine, an art director who was descended from one of the most noble families in Russia. 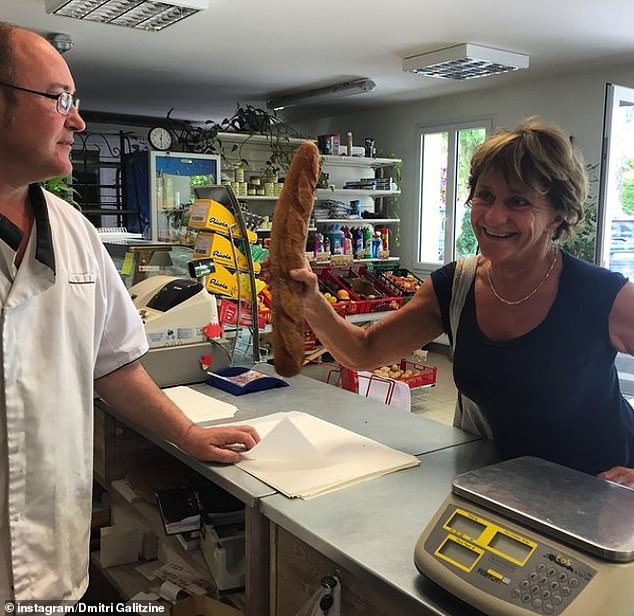 While she never maintained a conventional career path, Emma worked as an interior designer and reflexologist during her life

He had also enjoyed romances with Helen Mirren and the famous figure skater and actress Maria Belita Jepson-Turner.

The couple welcomed a son, Dmitri, who is an artist and continues to live and work in London.

That marriage ended in 1992 and she remarried Giles, who died ten weeks later of colon cancer.

Princess Emma then spent 12 years with John Wickham, who works in shipping, and for the past eight years had been with Jeremy Walsh, a stockbroker. 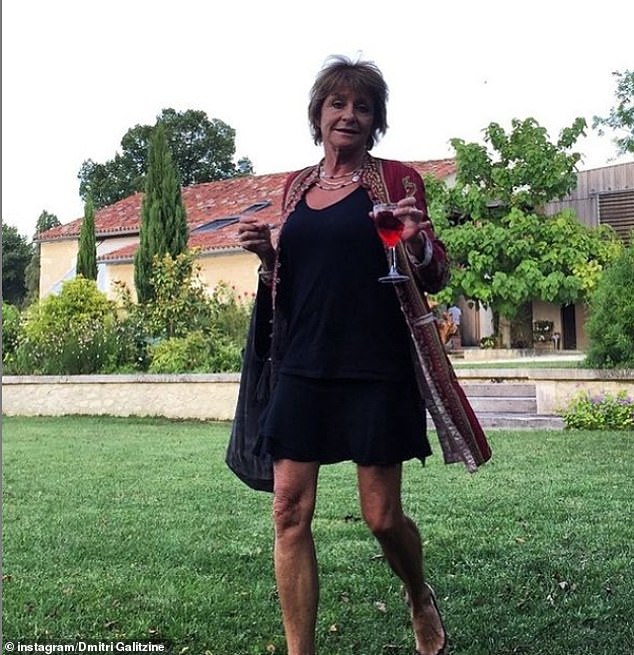 Emma was renowned for her flirtatious and fun-loving behaviour, and during one dinner party, decided to change into skimpy riding gear and thigh-high boots to perform a dance on the table for guests after the main course

While she never maintained a conventional career path, Emma worked as an interior designer and reflexologist during her life.

Her love of horses continued throughout her life, and she was a memorable presence at the Heythrop and Bicester hunt balls.

She scandalised the wives with her flirtatious behaviour and impressed husbands with her arm-wrestling challenges.

She also volunteered at the Lighthouse Centre for people with HIV and Aids.